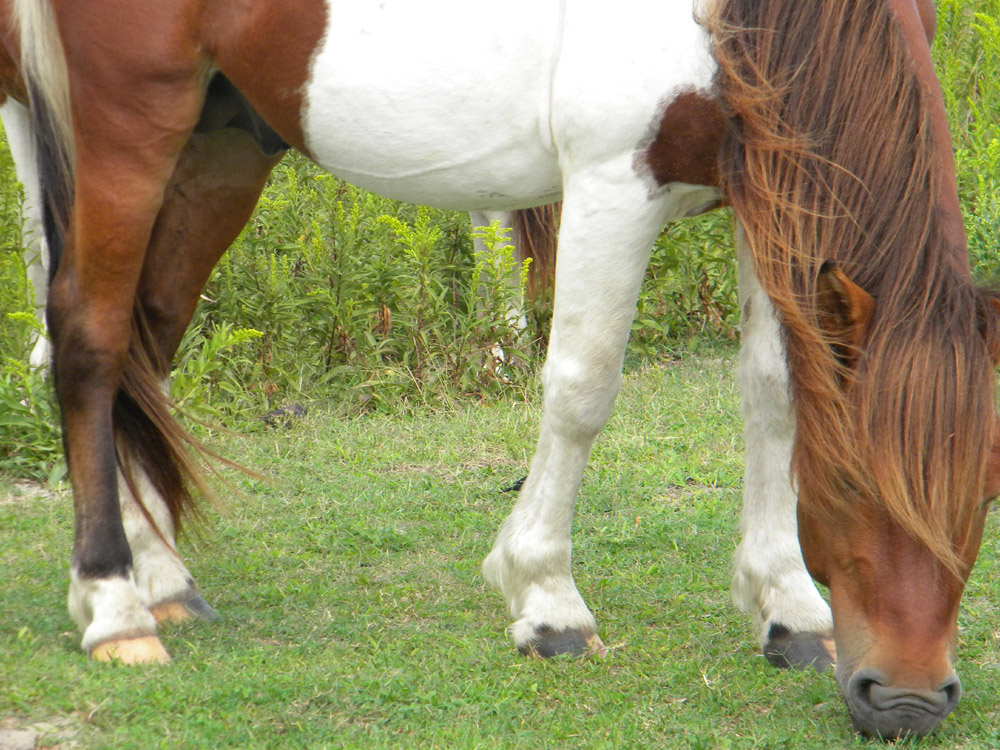 A "wild bay" pinto stallion named Yankee grazes in the campground, his black mane is sunbleached, black spots on his coronet bands give rise to black stripes on his hooves. The edges of his spots look blurry because white hairs overlap dark skin and bay hair.
The north end of Assateague Island lies in Maryland. Here the island is wider than the southern hook at Tom's Cove. Dunes rise above the beach, held in place by beach grass and snow fence. The lights of Ocean City glow like a mutant Yule ornament to the north. Here the island is part Maryland State Park and part National Seashore. You can camp at either one, right on the beach, unlike the southern end, where the human accommodations are all on Chincoteague. Here you can put up a tent a hundred feet from the sea, hear the surf all night, and go out and lie under the stars.

Throughout the parking lot for the day beach, and the campsites, you'll find evidence of the most famous residents of the island: the wild ponies. They have the same origins as the southern, Chincoteague herd; left there by colonists, some perhaps even by the earliest Spanish explorers. Over the years, other DNA has been added, especially to the Chincoteague herd, which is separate, and owned by the Chincoteague Fire Co, and rounded up each year to sell off the foals. The northern herd is managed like wildlife, although park rangers have the odd job of trudging through the bush, shooting mares in the rump with birth control darts to keep the herd at a level that doesn't damage the island's ecosystem (the horses have no natural predators here).

Over the centuries, the original Spanish and English horses have adapted to the salt marsh and beach environment, and reverted to natural equine behavior. They have shrunk from average 15 hand horses to 12 or 13 hand ponies (hardier in this environment).

They are not true wild creatures; zebras and some wild donkeys have no domestic history, and, like other wild animals, no juvenile characteristics that make them easier for humans to handle and train. These ponies are descended from horses domesticated for millennia and have all the domestic characteristics that make them tractable, trainable and easy to live with. They've just got a couple centuries of reverting to the wild, of going feral. If rounded up and trained, they would, like the mustangs I've worked with, make fine family members.

The bay tobiano stallion Assateague Lightning grazes alongside the campground road. Bays have black points (mane, tail, lower legs) but bays on Assateague sunbleach like beach boys. The red body color rarely fades though. He has the typical tobiano two toned tail; white on top, dark on bottom.
However, if you visit, remember:
Other east coast barrier island herds (Bankers, Corollas and Shacklefords of the Outer Banks, the Marsh Tacky of South Carolina, and the Cracker Horse of Florida as well as some western herds) are remnants of the Spanish Colonial Horse:
http://www.livestockconservancy.org/index.php/heritage/internal/colonialspanish
https://en.wikipedia.org/wiki/Colonial_Spanish_Horse

A chestnut pony wanders off the road by the bridge to Assateague. Here the land and water weave in and out of each other till you can't tell where one begins and the other ends.

After spending Monday afternoon on the island and not seeing any ponies beyond the couple at the park entrance, I asked where they'd gone. "Inland, off the beach." In summer, they often hang out on the beach to escape mosquitoes and biting flies. They have to eventually brave the bugs to go into the shrub zone, the woods and the marsh to eat, and horses eat a lot.. after all, it's low nutrient salad. On this windy late summer day, they'd gone in search of salad and away from the sandstorm on the beach. I caught up with these a few camp loops down from A, in RV Land.

The stallion here is Yankee (ID'd from the book in the visitor's center). He's a bay (color) tobiano (pattern) pinto (any color plus white). Like most tobianos, his legs are white, and the end of his tail is dark (sunburned black, bay is reddish-brown with black points). He has the additional uniqueness of the "Oreo tail", instead of white on top and dark on bottom, his butt is bay (many tobianos have white around the edges of their rumps) so the color extends into the top of his tail, giving him that white bit in the middle. One of his mares is also a bay pinto, the others are flaxen chestnuts, unless that's actually the silver gene.

I got up before the butt crack of dawn to get some of those iconic Sun Coming Up Over the Edge of the World shots... only it had been mostly cloudy all week. The murk parted a bit and the sky got promising. The surf pounded, the wind roared and I caught movement out of the corner of my eye...

... a band of four ponies walked right behind me, headed over the dunes to my camp. I followed and got pics of horses doing what they do, mostly eating salad and scratching their heads on picnic tables.

This herd is three mares and a stallion, all chestnut (aka sorrel) with flaxen points (manes, tails, lower legs), one brighter red. This color can also be achieved, as with Surfer Dude of Chincoteague, with the silver gene (Surfer looked like these ponies, chocolate with blond points). The stallion has a dark hock, just one... chestnuts vary from light to dark and sometimes have slightly darker manes and tails, Bend Or spots, sooty markings etc.

There are often a few ponies hanging out around the park entrance. Nice grass there. Tourists used to try to feed ponies here, which trained them to mooch, put them in danger, not only from cars, but from colic and founder from too-rich human food and changed their natural behaviors. Education has changed human behavior... mostly... If you visit, observe from a polite distance, and watch what horses really eat.

This group consisted of a wild bay mare named Gizmo (wild bay has lighter legs, not solid black), a (sunbleached bay) pinto and two chestnuts (one lighter with a darker mane, one darker with a blonder mane). Nearly all the pintos are the tobiano pattern, though Chincoteague ponies have occasionally shown other patterns.