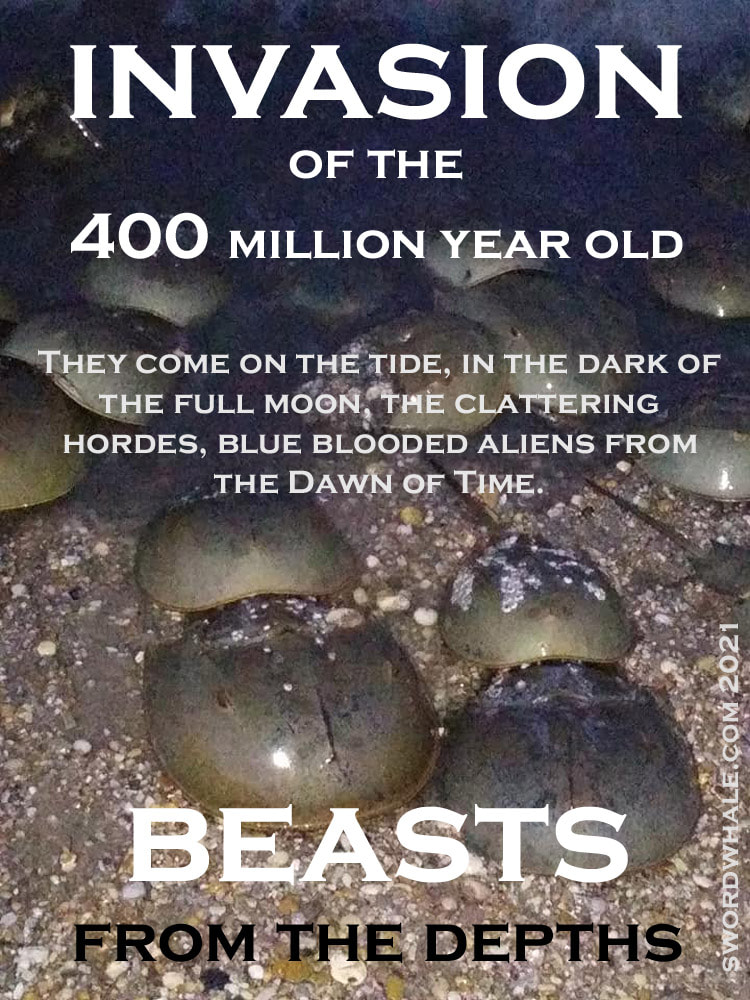 2020 was everyone's own horror movie Year From Hell, a real World War Z, Dawn of the Deadly, and the Year I Was Swallowed By My Couch... or computer chair. We all got fatter, tireder, and were done done done with Zoom.

Kayaking saved our buns over the summer, but then winter hit, and we hibernated. I was down to one old sled dog, so I didn't even hit the trails. The pool was closed, so no mermaiding. The only good news seemed to be wearing masks and not going out also prevented the regular flu (along with the flu shot).

FINALLY IT IS SPRING!

And it's still freezing. Not literally... but it's TOO BLOODY COLD FOR SPRING!

By the full moon of May, we finally got some warm, the parks and beaches of Maryland and Delaware were open,(and the Comfort Inn, because a couple of 60+ year old outdoor women decided camping was right out right now) and those of us with vaccines set forth to witness a phenomenon that has survived five mass extinctions on the planet.

Let me repeat that: FIVE. MASS. EXTINCTIONS. And horseshoe crabs are still here.

From the dnr.maryland.gov website... There are crabs in the Chesapeake Bay, but the Delaware Bay is better known for a larger mass spawn.

The horseshoe crab (Limulus polyphemus), is the oldest living fossil in Maryland. Horseshoe Crabs evolved much earlier than humans or the Chesapeake Bay. Fossils of horseshoe crabs have been dated at 445 million years old. They evolved in the shallow seas of the Paleozoic Era (540-248 million years ago) with other primitive arthropods called trilobites, a long extinct close relative of the horseshoe crab.

​When the crabs first appeared, there was very little living on land. Vascular plants that could transport water up stems came later, as did land going herbivores, vertebrates, and the eventual avian dinosaurs (red knots and friends) that would become one of the crabs biggest predators. It made evolutionary sense to come as far out of the sea as possible, lay your eggs at the highest tide, let them sit, safe, away from the predators, for two weeks until the next highest tide to hatch and swim away. 400 million years later, red knots and other avian dinosaurs stop in the Delaware Bay to refuel on the abundant eggs. Red knots migrate from the tip of South America to the arctic...every year. And back again. One of the longest migrations ever.

I set out with a friend who had never been to the crab spawning but was an outdoors person and boy scout mom so, well prepared. We stopped at DuPont Nature Center on the Delaware Bay coast and breathed in the salt air. This small out of the way place has great info, aquariums with local species, a sandbar cam (where birds and crabs congregate) and a webcam for an osprey nest. They also know the best places to see crabs. It was low tide, but there were hordes of crabs hunkered down on the sandbar, keeping their book gills wet, waiting for high tide. In the marshes and guts along the road you could see other crabs, dug into the mud, waiting. A wrack line nearly halfway across the road showed where the last high tide had been. Crabs had ridden it in, and some had stranded on the road. Others were below, among the sand and ripraprock, waiting.

Slaughter Beach DE is a tiny town strung along the coast of the Delaware Bay, just north of Cape Henlopen, where the Bay becomes the Atlantic Ocean. It is famous for being a focal point of horseshow crab spawning, but locals informed us that the beach had undergone reconstruction; translation: humans shoving sand around because they built houses there and sand moves, so they move it back. This disturbs the natural order of sand coasts and what lives there. The crabs had moved farther north.

We visited North Bowers Beach, home to large fancy beach houses, but a natural bay beach. Tide was out, and extensive sand flats stretched far into the bay. Cargo ships trudged up the bay, a few gulls wheeled. We walked out into the flats. Much of the surface was firm sand, rippled in a wave pattern familiar from Eastern Neck Island's low tide a few weeks ago. Some areas were smooth, and some disturbed, silty sand bubbled up.

Hidden crab! You could poke a finger in and feel the shell, or wash away an inch or two of sand and see it. Some were hunkered down deeper than others. Some big females had an attendant male hanging onto her shell. Many had passengers: barnacles, snails, slipper/boat shells. All waiting for high tide.

From there we went back to Slaughter Beach. My friend met a lady with a lovely Irish accent who told us about the beach "restoration" and that we should go north, cut through her backyard, and there we'd find the real spawnfest.

We did, and by nightfall, the incoming tide had brought with it wall to wall crabs, tumbling over each other, males trying to clamp onto a mate, females trailing a train of males, all trying to reach the perfect spot to leave eggs.

​Crabs on the beach north of Slaughter Beach

I originally livestreamed these videos on Facebook. The cell phone camera was pretty good in the dark. And we found a tagged crab!

Pics with the "real camera": Nikon Coolpix B500

Crabs that came in on the last high tide hunker down into the sand and silt to keep their book gills wet, waiting for the next high tide. They will continue farther up the beach to lay eggs, then retreat to the bay.

The nice Irish lady saw us at Slaughter Beach, where I have gone for years to see the crabs. She said they'd done some "reconstruction" which means humans, who've built houses at the edge of the sand, and do not wish to see their houses end up in the bay due to the natural movement of sand beaches, have moved sand around, thus disturbing the crab migration. So we went a mile and a half or so north to her house, walked through the backyard and found the real spawnfest... cell phone camera shoots better in low light and dark situations, but some of the pics are a bit hazy or grainy due to the fact this all is taking place after dark. The moon was a day out from full, but largely clouded. For the videos above... and some of the stills... I used Holly's camp lamp (small flashlight on a lanyard) when it got very dark, though it also shot fairly well without a lamp. Also the cell phone has a flash.