Go outside and play with your toys. There's a collection of collectors who do some awesome photography using Breyer and other equine models. Photographing model horses in a landscape makes you look at a familiar place in a new way, interact with a new place in a unique way, and celebrate the artistry of the sculpture that is the model. Also, if you don't have a real horse, this is the next best thing.

Flame is from my childhood, and is actually one of my favorites. Nice action pose, and fairly accurate anatomy. He came with tack, but I made a lot of my own. The open mouth accommodated a bit, original or homemade. Here I set him up in a snowfall with a doll I found in a thrift shop. She was wearing random clothes and her hair was a mess (so, short bob for you girl!). It took awhile but I finally realized it's Anna from Frozen. She's wonderfully articulated, the exact sort of doll I wished I had as a kid!

Flame sat on shelves for years, and light exposure darkened some areas of his plastic on the left side. You can see the shadows (lighter) of the tack I had on him all that time. It may be time to repaint him.

Dallas, a Barbie horse from the early 80s

This pony was also found in a thrift shop. It took some googling but I finally nailed him down as a Barbie horse from the early 80s. Nicely articulated and in good shape, he's not even faded, nor has the plastic changed color from light exposure.

Found in a thrift shop badly faded and yellowed without his tack. I repainted him to the actual white horse the Lone Ranger's Silver is supposed to be (the toy was originally designed as a light grey). He's fairly posable and fun to photograph.

Another nice "Barbie scale" horse, somewhat poseable. He's actually a palomino (light mane and tail not dark like a buckskin). This is his original paint job. The Johnny West horses were designed by artists who actually knew what horses look like. They echo the type of western horse drawn by Charles Russell and Frederick Remington.

A really nice overall model with a terrible original paint job. I'll admit to liking chestnut ("red" genetically, aka sorrel) the least... and black the most of horse colors. The Johnny West chestnuts were flat (shiny helps this color a lot as does variation in color as on a real horse), and the random weird pale spot on the chest was just... random. Perhaps they were trying to evoke the pale undersides/chest/lower legs of "pangare" (think the kind of countershading seen on deer and antelope). Fail! The "blazes" were flaxen, and while a red pinto pony in my pasture has that "donkey nose" mealy muzzle (typical of flaxen and other colors) it shades into the red rather than the hard line here. And blazes are white never flaxen. The stockings have a hard edge, like proper stockings, but are the wrong color: flaxen, not white. Breyer and Hartland had a habit of airbrushing white markings so the edges were blurry. On real horses, white marking edges are sharp. Flaxen chestnuts often have lighter lower legs, a sort of "flaxen stocking" but it shades softly into the darker red farther up. Over all, this was a terrible paint job that I hated. So they became black.

Hartland made some nice (if simpler than Breyers) models back in the 60s. This is the Arabian stallion in what they called "alabaster" (near-white grey with a grey mane and tail). The action figure is Legolas from the LOTR collection by Toybiz. 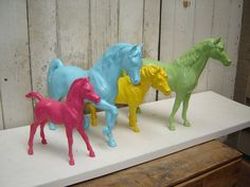 
I bring you the Originals... 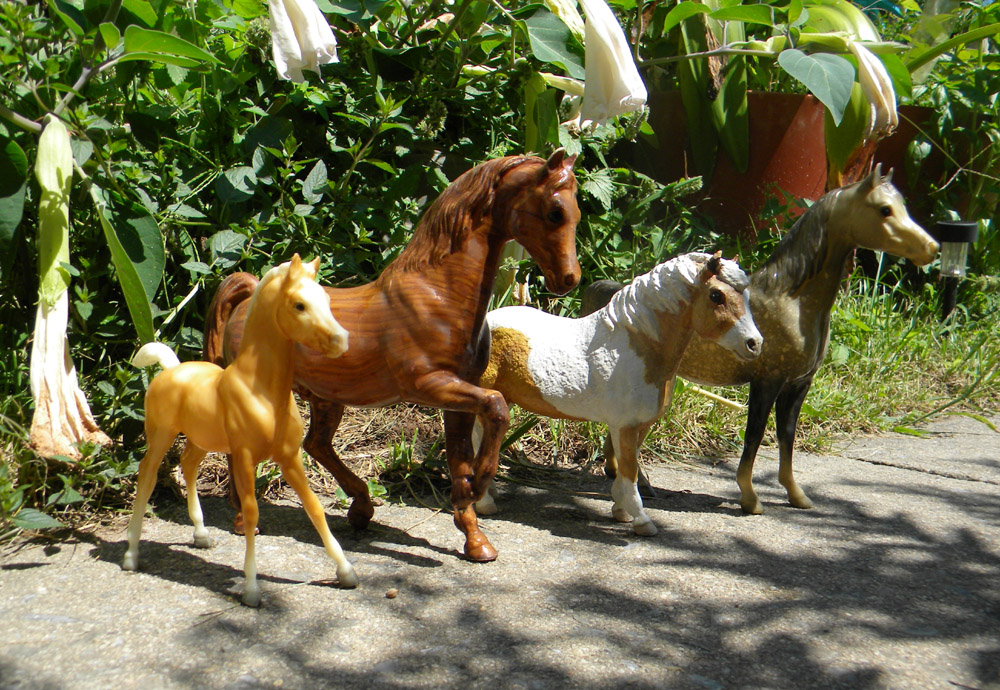 Arabian foal, Arabian Stallion (rare woodgrain), Misty of Chincoteague (bought at her gift shop by her stable three months before she died and repainted the correct color pattern), Arabian mare.

I got Misty in 1972, the last year the real Misty was alive. She lived at the Pony Farm on Chincoteague and we visited her there. The gift shop had a Breyer model, painted (oddly for Breyer) completely wrong. Well, at least her head. What Breyer had done was copy the excellent cover art by Wesley Dennis (an awesome artist who knows horses and other animals and has done many many Marguerite Henry books). What they didn't know, was he'd painted the cover as Misty in her foal coat, a misty white with her adult palomino color showing around her eyes. To the non-horseman, it looked like a pinto with a white head and a patch around the eye. her real color was palomino pinto, a solid (as in most tobiano patterns) head with a blaze. I repainted her from photos and Wesley Dennis's paintings of her as an adult. I aquired Stormy a few years later on another trip to Chincoteague. Here they return to their home island.
Below: a collection of Safari models runs along Assateague beach. The lead horse was repainted slightly to look like Surfer Dude, a famous Chincoteague stallion. Spot the mistake? no footprints... 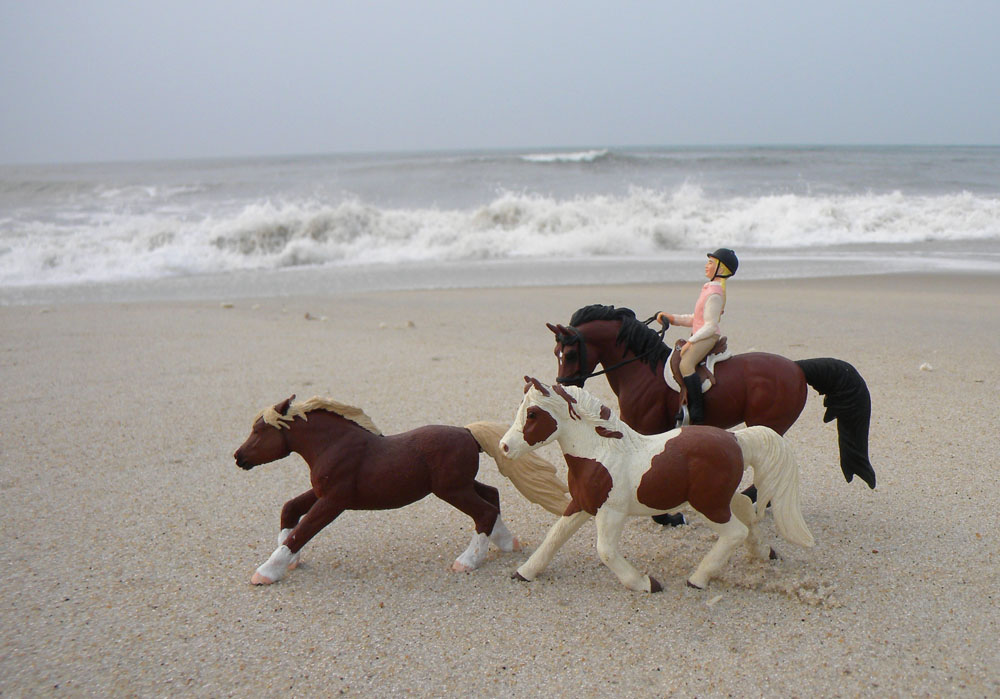 Go ahead, paint it blue

Save your home decor accent-color brainfarts for cheesy Chinese plastic, recycled things found in thrift shops, yard sales and the trash. The larger ones are actually Wonder Horses without their bouncy frames. Their original paint job was awful, their anatomy is great. The mermaid horses are Our Generation: I simply repainted the beat up black one, flat black (with shiny eyes). The battered white one became a blue sea horse (add a ModPodge top layer embedded with glitter for a seawater look). Colors are: Rustoleum 2X Lagoon, Seaside, Oasis and Apple Barrel Craft Paint Turquoise.

Two Our Generation horses (scaled to the American Girl dolls, and much nicer than the AG horses) make a splash...

The low waves of this Chesapeake Bay beach are in better scale to the horse than an ocean beach.

Not as detailed as Breyers, these still have a fairly nice shape and reasonably accurate anatomy. Especially nice when repainted, even in basic black. Nice as chalkboard horses, or as resculpt or repaint projects.