2018 is the year in which the Doctor (of the classic BBC sci-fi series Doctor Who) regenerated into a woman. If you've been living in a cave and know nothing of the series, it began over 50 years ago with the idea of teaching kids about science and history with a time travelling Time Lord and his space/time ship, the TARDIS (Time And Relative Dimension In Space) ...whose disguising "chameleon circuit" got stuck in the shape of a blue British police call box. The Blue Box has become so iconic, all you need to evoke smiles from fandom is put "Police Call Box" across the back window of your blue van... or wear this hat... 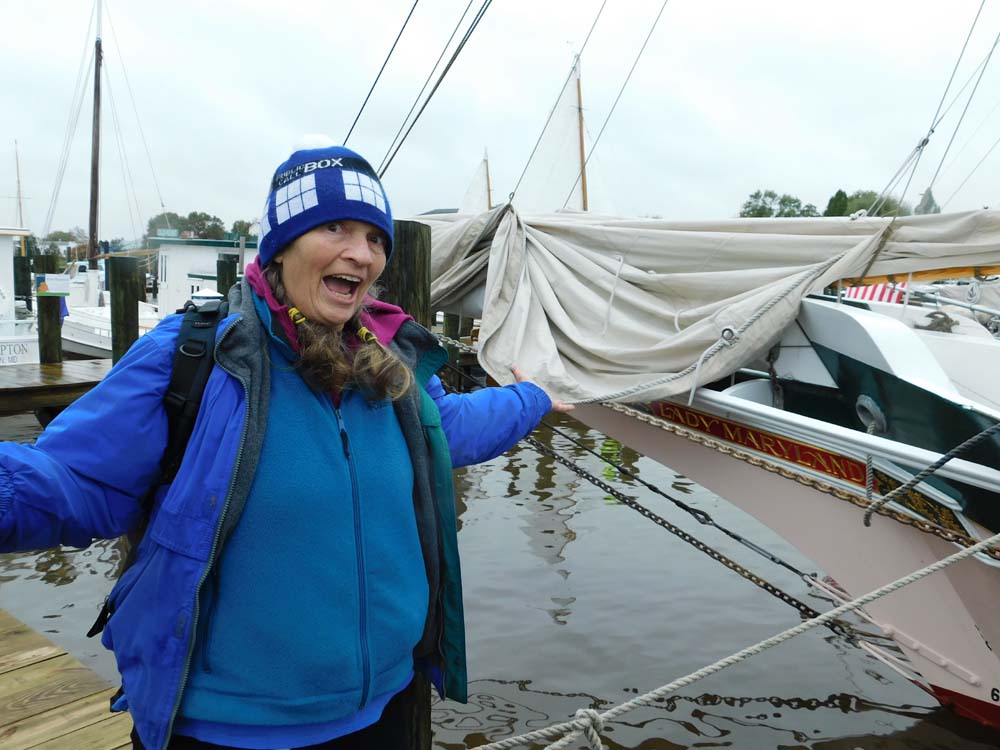 The Doctor began "regenerating" when the original actor could no long do the show... he just gets a new face every few years as another actor takes over (along with showrunners and writers at times), it keeps the show fresh and unexpected.The arrival of Jodie Whitaker's thirteenth Doctor made my inner twelve year old very happy, now the Doctor is a girl. This fabulous T-shirt has fun with both Thirteen and Lucy of Peanuts... 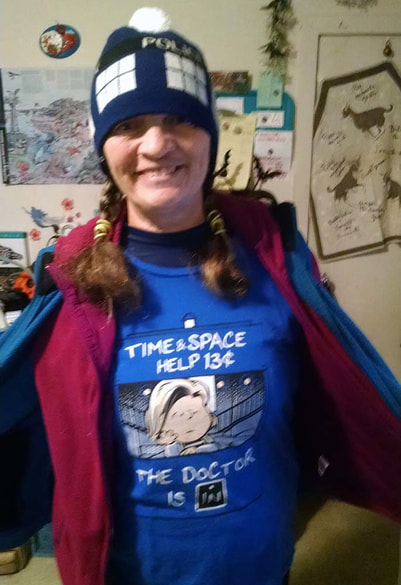 but what has that got to do with a bunch of boats?!?

I've done lots of living history over the decades, including sailing on Viking longships with the Longship Company out of Oakley MD. In the Chesapeake Bay region, there are many groups preserving actual history in the shape of 100 year old skipjacks, museums with log canoes, and reproductions of the ships that carried us through history as surely as the tardis.
​ 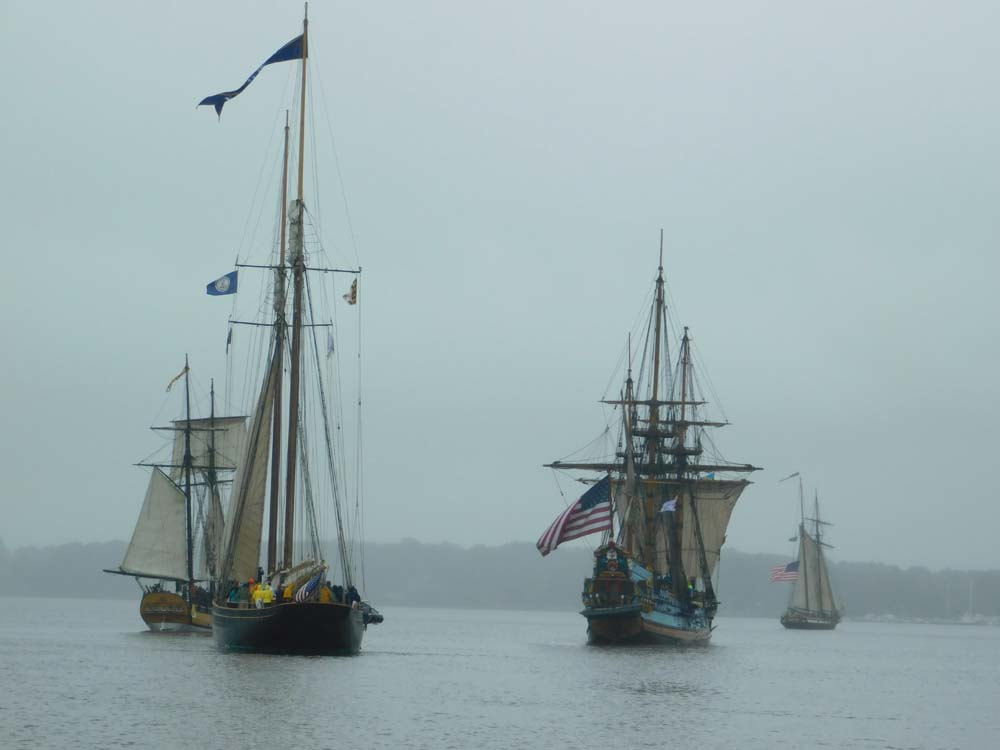 Downrigging Weekend, in Chestertown MD, began as a fun sail with two boats... and expanded into a long weekend celebration of historical vessels, colonial architecture (Chestertown was a port before Baltimore), food (have some fish and chips on a riverboat), music (there's a hurdy gurdy man somewhere), and art galleries (check out local artist Marc Castelli's awesome watercolors of Chesapeake Bay watermen).

Oh yeah, and you can book a ride on your own tardis...

The waterfront is a floating timeline from the 1630s to 20th century workboats (like the actual 100 year old skipjacks, Elsworth and Sigsbee).

Kalmar Nyckel (the big blue tardis) brought the first colonists to "New Sweden" (Wilmington DE) in the 1630s. Schooner Sultana (the deep yellow one) was the smallest ship in the British Navy in 1769; she was built in Boston and bought by the British Navy to enforce taxes on the east coast and Bay area. She crossed the Atlantic several times, once near sinking in a gale... until they cut the beer kegs on deck loose. Pride of Baltimore II and Privateer Lynx are War of 1812 privateers, or Baltimore Clippers, wicked swift and agile, privately owned boats were the US Navy in that time period, and helped us make our mark on the world (while annoying the British Navy). Lady Maryland is a pungy schooner, related to the privateers of 1812, she's fast and sharp, and her kind delivered perishable goods in a timely fashion. She's also painted a nice deep green and pale pink ("bronze" and "flesh"). Virginia is a pilot schooner, fast and agile, they took pilots to incoming ships... local pilots knew the waters and could avoid the shoals, and the boats raced to get their pilot out there first.

I had booked a ride on skipjack Sigsbee, but there were engine issues so all Sigsbee's passengers got sent to other ships. I ended up on Lady Maryland, which I have sailed on before. She's the pink one.

Now I like blue. But Lady M is a fabulous boat, and the 19th century pink pungy is perhaps a perfect point of departure for the thirteenth Doctor's new voyages. 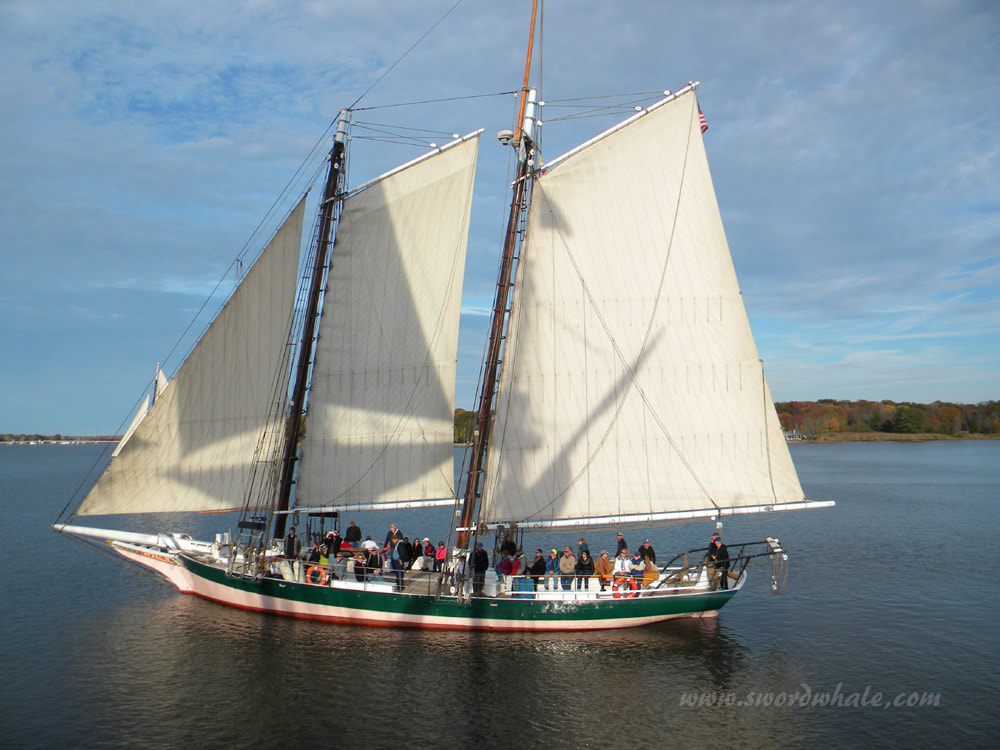 Lady Maryland in 2015, with the shadow of Kalmar Nyckel on her sails.
​She's heeled enough in the wind so you can see her red bottom paint. 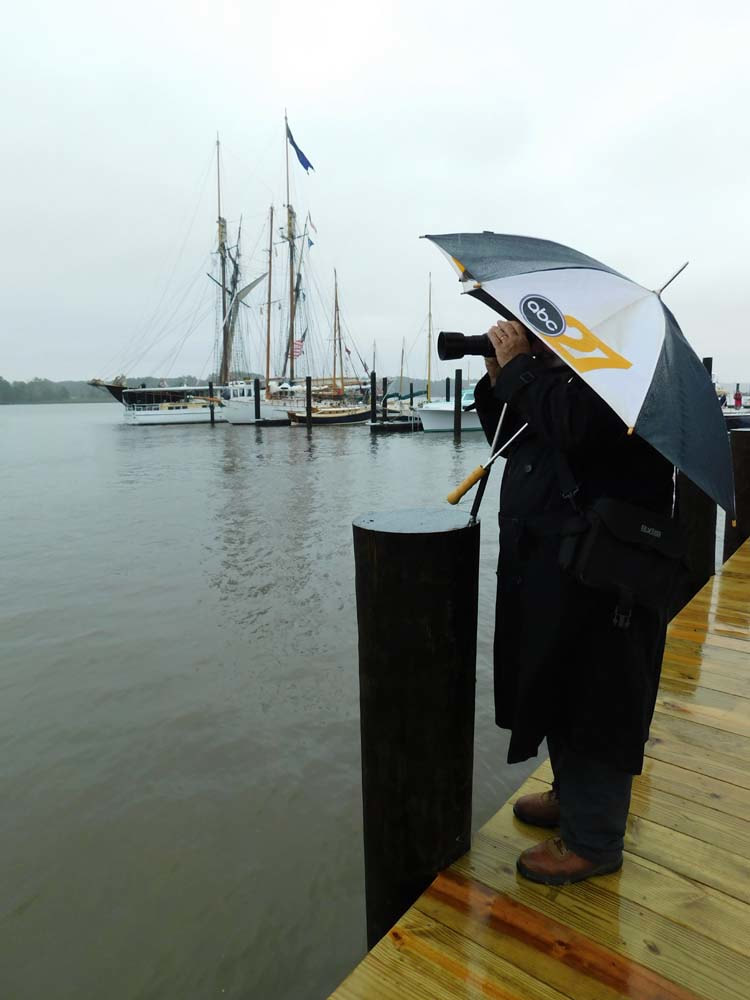 yeah, photography was fun in the rain: Dave Tristan somewhere under the brolly...

then Sultana Education Center and Scales and Tales

The Halloween birds were out in full force: crows in the parking lot, vultures on the rooftops, and lots of owls with Scales and Tales. Even the muscovy duck looked like he was perhaps trying to be Deadpool for Halloween...

lunch on a riverboat

and finally the sail

It was drizzly, greypewter and a bit windy. Wind is good for sailing, and sailors have their foulies on, and so did most of the hardy guest crew. Umbrellas are not a good thing on boats, not enough room and too many pokey bits so I used various towels and my backpack's rain cover and wiped the camera a lot. I still have shots with rain spots on them. It did give a neat bleak sort of lighting where certain colors jumped out and ships faded into the mist like ghosts.
Downrigging goes on despite the weather, and at the end of October in Maryland the weather can be anything. One gust sailing on Lady Maryland quipped that his weather app showed the rain had stopped... it had not and I was still trying to shield my camera with no umbrella. I discovered the backpack's rain cover worked reasonably well. Umbrellas are a positive hazard on ships...not enough room and too many pokey bits.