and other tidal waters

Kayaking tidal waters is a bit different from paddling a quiet lake.

Kayaking 101 is covered here: ​kayaking 101 Basically all the stuff you need to carry and the basic skills you need to not end up as a Darwin Award headline. It's easy, it's fun, but water is the most powerful stuff on earth, so respect it and be prepared.

For tidal waters like Chincoteague and Assateague Islands, and parts of the Chespaekae Bay, you need to know some other stuff.

The two "teagues" are my favorite places to paddle. Much of the water where you paddle is shallow, often less than three feet deep. Wildlife is abundant, shorebirds, wading birds, sandpipers, brown pelicans, oystercatchers and skimmers and others. Wild ponies roam and can be seen from some shores. The north end of Chincoteague has a pony farm where the Chincoteague ponies roam, fenceless, down to the water's edge...

Assateague is a long narrow barrier island, a fancy sandbar rolled up out of the sea. In cross section you go from ocean, to dune, to interdune to shrub zone to woods to shrub zone to marsh to shallow bay. The marshes and bays around Assateague are the best paddling: they are shallow, except for some holes and channels (most places you can stand in 3 or 4 feet of water). They are sand, silt, water and marsh grass and wildlife. You can launch a sit-on in the surf, but that's a bit more challenging and will depend on whether a hurricane has just waltzed by. Wild ponies and shorebirds are best seen in the marshes.

Chincoteague lies at the south end of Assateague, like an egg in the protective curve of a dragon's tail. Chincoteague has no ocean side, it is surrounded by very healthy salt marshes and shallow waters, with some deeper channels. These marshes and channels are the best places to kayak. But be aware that anywhere the water narrows, as in a channel between bits of land, the tidal currents will be stronger... they can be just downright fun...

Wallops Island lies to the south. You can see the NASA telescopes and stuff from Assateague's beach or from your kayak. It's worth a visit to the NASA visitor's center, but don't go by kayak... if you're that close to Wallops, you're out the channel and headed to France...

The Virginia Barriers lie south of Assateague. They are a string of similar barrier islands. There are places to launch down there, but I have never paddled that area. be aware of the channels between islands, there would likely be strong currents out to sea. Worth exploring with knowledgeable guides.

To the north are places like Prime Hook and Cape Henlopen. I have launched at Prime Hook, it's a quiet paddle through marshes and guts and narrow tidal creeks. Cape Henlopen has a bay on one side and ocean on the other. It also has an inordinate amount of sand to carry your boat over to get to the water which is why I have never paddled it. It's a nice beach for camping and swimming and wildlife observation. Great nature programs and bike trails.

Finally, the Chesapeake Bay is one of my favorite places to paddle. It is all tidal, though it ranges from tidal freshwater like the Sassafras River to brackish waters like Eastern Neck to salt water. It runs by the same rules: watch the weather, tides, and be prepared, you're on big water now. 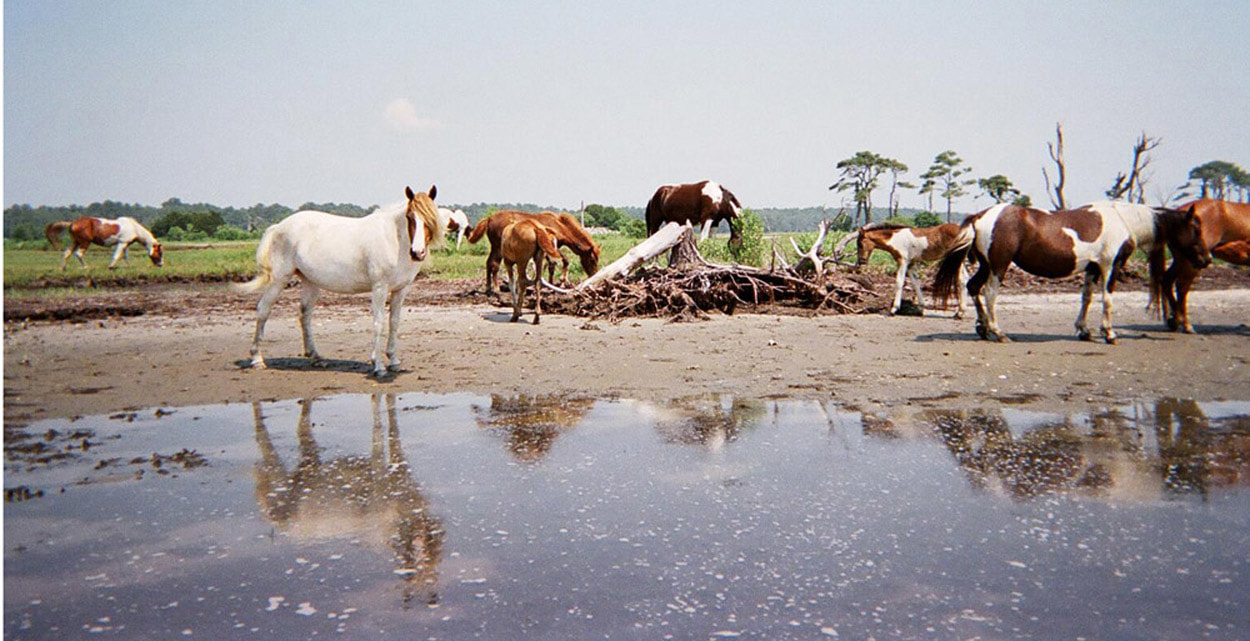 landing your boat, wild ponies, and other wildlife

​(nope, you can't land here, because of reasons)

I grew up on ponies and horses, and have trained a few, including a couple wild mustangs. Most tourists who visit the islands are fascinated by the ponies, and most are not horsemen. Here's what you need to know to enjoy them safely... safely for you and the ponies.

Chincoteague and Assateague are famous for their wild ponies. They arrived with the first colonists who avoided various taxes and fencing laws by grazing livestock of all sorts on the "open range" of the barrier island, rounding them up as needed. (There's also a legend about a Spanish shipwreck, and there ARE lots of shipwrecks and some are certainly Spanish and some certainly contained horses). The cattle were removed in either the American Revolution or the War of 1812 to avoid inadvertently feeding the British Navy. The last Sheep Roundup was sometime in the late 1800s. The ponies remained, and became a tourist attraction in a big way after marguerite Henry's book Misty of Chincoteague was published in the 1940s. Pony Penning is an echo of the traditional roundups, done every last week of July.

They are not pets, they are not trained.
​Do not feed, do not approach, and everyone will be safer...

A Chincoteague pony fan posted a pic of some kayakers pulled up on a beach, boats surrounded by curious ponies. She posted it as a teaching moment. While the pic is lovely, and who wouldn't like to picnic on a remote beach surrounded by pretty ponies...
...there are many reasons you do not approach them, feed them, or leave your boat near them.

so pay attention where you land, and who's already there

​enjoy the ponies from a safe distance

Off the west shore of Chincoteague is a shallow bay full of eelgrass beds. When the conditions are right, you can get enough visibility to snorkel here. I've spotted pufferfish, pipefish and seahorses, rays, diamondbacked terrapin and triggerfish blown in from the sea. I've followed dolphins up the channel, and watched skimmers unzipping the water.

If you get out to mermaid, snorkel or swim, be sure to have a boat anchor.  Anchoring wisdom says 8x the water depth for your anchor line length. The average depth of the back bay is like 3 feet... with some 8 or ten foot holes. You do not need 80 feet of line, thank you. About double the length of your boat is good: 20 feet or so. A five pound barbell works to secure a 17 foot sea kayak. A five pound dive weight works too. Or a canoe anchor.

The clear water bubble, according to Captain Dan who has plied these waters for lo these many years, varies as to where it is and how far it goes out into the bay. The "bubble" is an area in the back bay which has great visibility, enough to drop out of the boat and go snorkeling. I've done it, it's fun, easy, safe (problem? you just stand up, because you're in three or four feet of water). You might see pipefish, seahorses, rays, pufferfish, random visitors from the sea like the spotted butterfly fish or grey triggerfish, diamondback terrapins (marsh turtles)(I was out-swum by one once and I was wearing fins), sea bass, lizardfish. There are eelgrass beds here that harbor all sorts of life. If you walk, do the stingray shuffle (slide your feet, don't stomp). They are utterly non aggressive, but don't step on one.