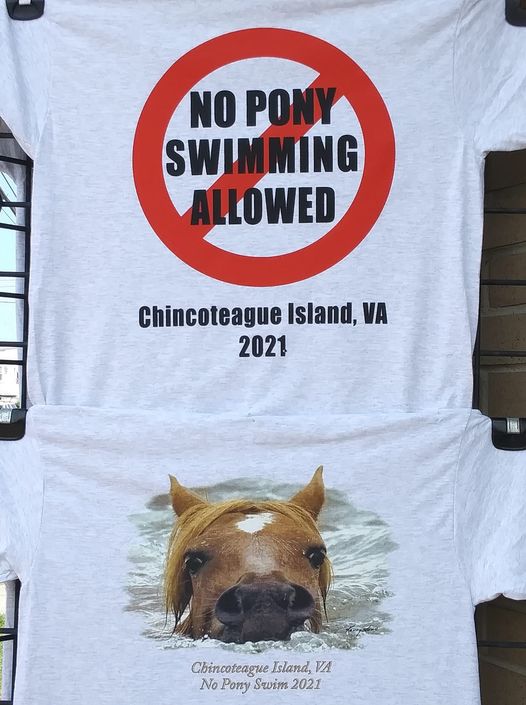 So many pony pics, they required their own page.

While there was no pony swim, pony penning of a sort did occur. The fire company is limited to about 150 ponies grazing on Assateague (which is divided into Wildlife Refuge and National Seashore in VA... on the MD end, it is National Seashore and State Park). Each year they have to round up and remove foals, selling them at the famous auction which raises funds for the fire company and care of the ponies. Normally all the ponies are rounded up, most (except the too old, too young, or those deemed not strong enough) are swum across the channel at slack tide to Pony Swim Lane on Chincoteague. This echoes old traditions of livestock handling that existed before bridges and horse trailers. A handful of foals each year are kept as "buybacks"... not actually bought back by the fire co, but bought by anyone (including groups), and left on the island as breeding stock. The locals choose which foals are buybacks.

This year only mares and foals were rounded up; the northern herd corralled up on the north end of the VA section in an existing corral, the southern herd rounded up and corralled in Beach Road's pens. No swim, no public events, and an online auction (same as last year, which did very well).

Information was sporadic, even if you were on a dozen Chincoteague Pony facebook pages. Rounded up Sunday and Monday, but kept where? Are they coming to the fairgrounds? I stumbled onto ponies in the fairgrounds paddocks almost by accident Sunday, three tents set up by various organizations such as Feather Fund and DSC Photography (who have been following and documenting the herds). They directed us to park down the street in the church parking lot. I settled in and took pics as stock trailers brought in mares and foals, better behaved at loading than most barn raised ponies. Of course they have corrals with chutes and such that help this process.

​Hopefully every pony is here. Identify any that aren't if you can. And I want to know who that little buckskin was who kept staring at me. No, I do not need another pony.

in the marsh off Beach Road

in the corrals at the fairgrounds

Riptide and his tiny herd

Apparently Rippy objected to them rounding up all the mares and leaving him out. In normal years past, all the ponies, including stallions, are rounded up, taken to the carnival grounds, foals auctioned, then all but the foals who are old enough to be sent to new homes are herded back to Pony Swim Lane where they swim back (unless they have some issue, like too young foals, which are trailered over). In The Year of the Plague (2020), and in 2021, there was no Pony Swim. In 2021 only mares and foals were rounded up. Two mares, with their buyback foals, were left with Riptide in the corral along Beach Road: Sonny's Legacy (white with red/chestnut on both ends),  and ET (bay pinto with an "ET" pointing finger on her neck).

ET's filly has some extreme roaning, not Roan (Rn/Rn or Rn/rn), which is no longer in the herd, but roaning which is part of the tobiano pattern. Fun fact: the KIT gene locus houses tobiano, sabino, roan and several white patterns. A horse can have combinations of these because they inherit one gene from each parent. But a homozygous tobiano can never also be a roan (pinto) because the locus is already occupied by 2 tobiano genes. Only a heterozygous tobiano can also be Roan. Tobiano roaning also exists on ponies like Pixie Dust (hence her name as she looks like she's wearing pixie dust), Dakota Sky, Anne Bonny, Slash of White.

The "white" pony is Misty's Honeymoon. I have pictures of her in 2019 as a foal. She is actually perlino pinto: a double cream dilute on bay, with tobiano pinto white markings. Her eyes are blue, her skin is pink, like all double dilutes. And they do tend to squint in the sun.

Pony love is universal, but many more women seem to be deeply involved in following and supporting the pony herds. DSC Photography follows and documents ponies on the wild barrier island year round. Feather Fund helps deserving kids afford the auction prices and get a Chincoteague Pony, a great learning experience.

Someone on I Love Chincoteague Ponies facebook page posted about having seen folks feeding ponies at the fairgrounds on Chincoteague... despite signs saying DO NOT FEED PONIES. I blogged back, and shared, a post about WHY you can not only teach them bad habits, but also kill them by feeding anything outside their normal diet (salt marsh grasses and hay). A few other ladies on the site chimed in and we came up with a sign. I used my photo of Henry's Hidalgo, and Photoshopped the rest. They had it printed on metal and distributed around the fairgrounds and some shops. Thanks Sue Johnstonbaugh and others for caring for the ponies. 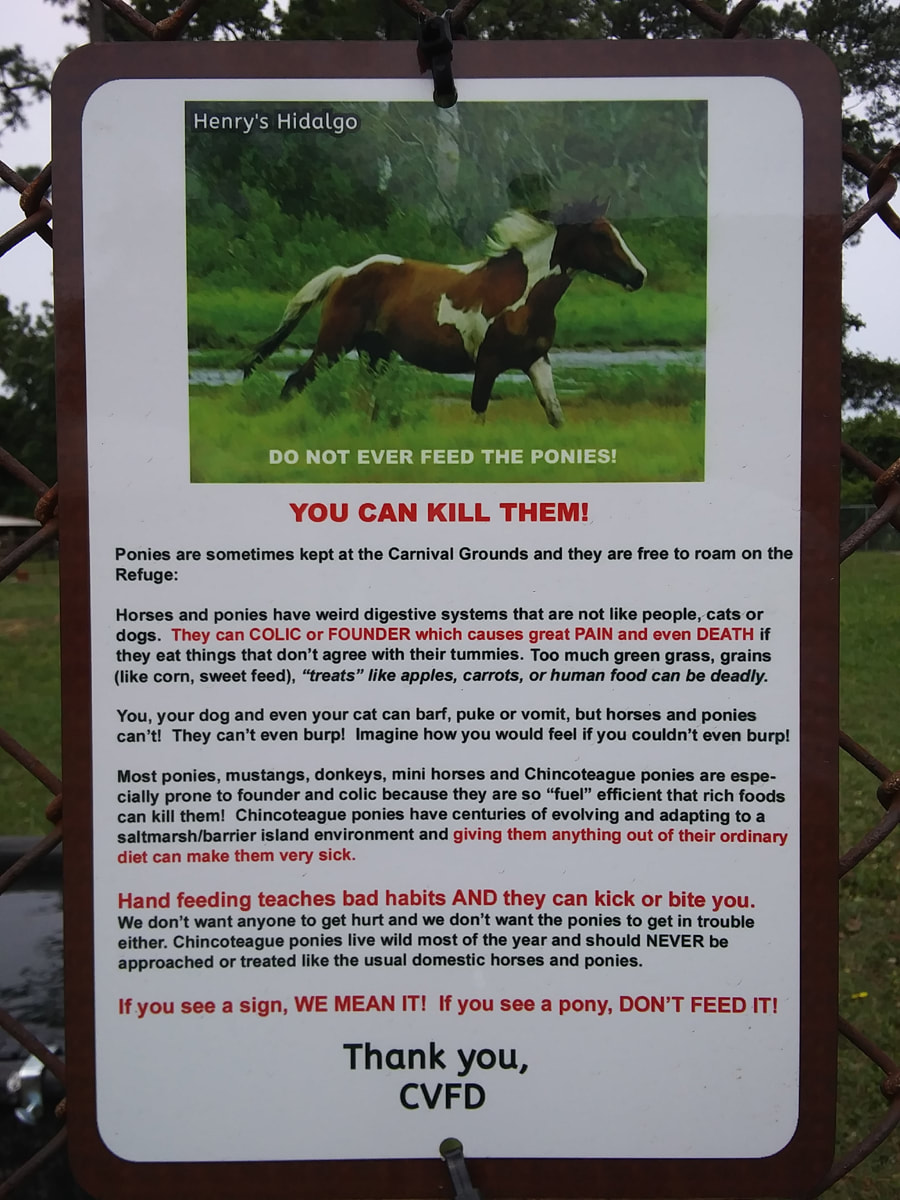