I've got more photos of Chincoteague Ponies than you want to know about.

I also grew up on ponies and horses and drew them over the years.

There are lots of great artists on the islands, and off, who do photography and art of the ponies.

I'm doing it a little different.

I've always been a "mermaid"... as a kid, my family (PA German) referred to mischievous kids as "nix-nook"... nixies, nokks, and several other versions of the word are fae water spirits, often appearing as horses. Hippocampus is the Greek myth version, and is the scientific name for actual seahorse fish. Over the years I've kayaked, scuba dived, snorkeled and explored the islands as well as the Chesapeake Bay and its watershed, where I live in southcentral PA. I also mermaid whenever I can put on a tail and slip into the water...

These are watercolor, with Prismacolor pencil (and occasionally a bit of acrylic) on vellum bristol paper. Most are 8x10".

Email me or facebook me to see what the latest pieces are, or order a custom one. 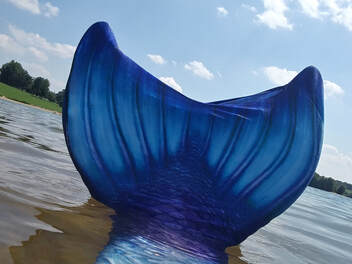 Raven was the high selling foal of 2020, the year the pandemic stopped Pony Penning... more or less. The ponies were rounded up, vetted, foals caught, the auction was online, and was more successful than any in decades.

I used a Schleich model (dark chestnut) as a base and acrylic craft paint.

First: paint it black. Then drybrush a light coat of a shade lighter than black over. Then a slightly lighter shade than that. I used browns and blues and a touch of purple for the drybrush shades. Black horses sunbleach and add shades of brown in mane and tail ends, and in parts of their body coat. Black horses also reflect sky colors.

I later added ModPodge (gloss) to make her eyes shiny.

Like her dad, Ace, she is a minimally marked black Tobiano pinto. Paint is a breed, pinto is a color pattern.

Little 8 x 10 canvases I did for gifts for friends who procured the hotel room, and critter-sat the beasties back home. I usually work in watercolor, so acrylic on canvas is a stretch for me. For all but Icicle, I wet the canvas, thinned the paint and dribbled it over the canvas, letting the paint run in blurry morning beach effects. I painted Icicle's background from a photo I took. I have met or seen all of these ponies (and have my own photos of them) except Icicle.

Misty's Icicle: I have many pictures of roundups, and there is always the odd "white horse" in them. True white horses are rare, Chincoteague ponies do not come in grey (which is what most "white" horses are). The mystery was solved on this website: http://www.thecolorfulchincoteague.com/. The "white" ponies are either pintos with almost no markings, or more often, double dilutes; cremello or perlino or smokey cream. The cream gene added to a chestnut horse creates palomino (Misty was a palomino pinto)(palomino is a color, pinto is a pattern). Added to a bay horse, you get buckskin, to a black horse, you get smokey black (a weird sort of almost black). Double the cream gene gets you "white" horses; cremello on a chestnut, perlino on a bay, smokey cream on a black (this is when a white horse is actually a black horse). I found a good example of a cremello in Misty's Icicle, on the Colorful Chincoteague.

Surfer Dude is perhaps the most famous Chincoteague pony after Misty. Born in 1992, he reigned as a herd stallion and produced a lot of foals in his trademark dark chestnut with flaxen points (the blond mane gave him his name). He was once thought to be a silver (silver gene lightens black bodies to brown and black manes to silver), but later observation points to flaxen chestnut. The flaxen gene lightens points on chestnut horses, the silver gene lightens blacks. Surfer had one blue eye, typical of horses carrying the splash (a white pattern) gene. He died in 2015, in the wild, having lived a long life just being a horse. His son, Riptide, continues his legacy.

The splash pinto: I saw and photographed him in the pens at Pony Penning in 2010, when he was a strikingly marked foal. The splash pattern is what gives Surfer Dude's family their white legs and big blazes, and some of them the odd blue eye. For many, like this colt, it looks as if they were dipped in milk. He turns out to be Surfer's Rogue Wave, a pony given away to a deserving kid as part of the Feather Fund. His sire is Surfer Dude, and his mother is Thetis. I found Thetis one day alone in the woods, as I explored a wooded trail. I have many photos and a few watercolors of her.

Got Milk is named for her nose, which looks like it was dipped in milk.

Miracle Man is notable for the "cat tracks" in the white markings on his side. Also for surviving being orphaned, hence his name. Several books have been written about him.

Ace (sometimes Ace's Black Tie Affair) made an impression on me in 2008. I went to Pony Penning, saw the swim to Chincoteague, then went back for the swim back to Assateague. The crowds are lighter, the ponies parade down the street from the carnival/fire co grounds sandwiched between saltwater cowboys. They go down Pony Swim Lane and to the edge of the bay, plunge in and swim back to the big island themselves, glad for another year of freedom. All except for one bay swaybacked mare and one black yearling colt. They staged a revolt, refusing to go into the water and swim back. A rodeo ensued as the cowboys tried to chase them back to freedom. They declined. Finally the two horses were allowed to run back to the carnival grounds. The swaybacked bay mare is Unci (which means Grandmother in Lakota) and Ace (notable for his black coat and two long stockings in back and short ones in front). Ace is now a herd stallion in his own right, and presumably swims back to freedom to join his mares.

These canvases were done to be quick and fun, not photorealistic.

Pages from the sketchbooks, done at Pony Pennings past. Most are ponies seen in the pens after the roundup. I didn't know who Surfer Dude, or Miracle Man were until kids explained them. To the kids, they were rock stars. The sketches of Misty, Stormy, Pied Piper and Phantom were done from photos in books. None of those famous denizens of Marguerite Henry's books were alive then. (I do have a sketch of Stormy done from life). Pied Piper, Misty's sire, was a chestnut pinto, Phantom, Misty's dam, was a smokey black pinto. Smokey black is a black horse with one cream gene. Misty's palomino color is chestnut with one cream gene. Pinto is a white pattern that appears on a large number of ponies. Generally the pinto patterns seen are tobiano, sabino and splash.

Misty is famous for her white markings looking like a plow on the right side, a reversed US map on the left, and her crooked blaze looking like a map of Virginia. Stormy's face had a crescent moon.

I have lived with horses all my life and commit art occasionally, so I pay attention to horse color. There is one glitch here in my notes; there are no duns on Chincoteague. Dun and buckskin are often used interchangeably to describe a golden horse with dark points (mane, tail, lower legs). they are actually two different sets of genetics. Buckskin is, like palomino and smokey black, the result of a cream gene. On a bay, you get buckskin, on a chestnut, you get palomino, on a black, you get smokey black (which just looks like black). Dun is it's own dilution gene, it lightens the body color and leaves the points the original horse color. On bay, you get dun... on black, grulla... on chestnut, red dun. I identify one foal as grulla, not possible. Might have actually been a black foal in its wispy lighter colored foal coat, a black foal with sunbleached coat, or a dark brown buckskin.

For the sketchbooks I scribble and do not erase much. You can see the structure lines and circles under the finished lines. Photos of art shot with my Nikon Coolpix L100, in open shade.