It started with Schooner Sultana (Chestertown MD, 1769) and Pride of Baltimore II (Baltimore MD, 1812) taking a sail together on the Chester River at the end of the sailing season, before both ships were "downrigged" for the winter. Literally, taking down much of the rigging to inspect and repair it before the next sailing season.

It was so much fun they decided to do it again.

And invited a few dozen of their closest friends.

Today Downrigging is one of the best waterfront festivals on the east coast. Chestertown MD is a beautiful colonial town (THE seaport until Baltimore took over) ... shops, galleries, seafood, the walk to the waterfront will burn camera battery and a whole camera card as the town shows her fall colors and Halloween decor off to the fullest.

The waterfront is a forest of masts. A floating timeline from 1638 to 20th century skipjacks and oyster buy boats and oyster schooners and other working boats, some over a hundred years old.

And (for you Whovians) at least one of these tardises is actually blue. 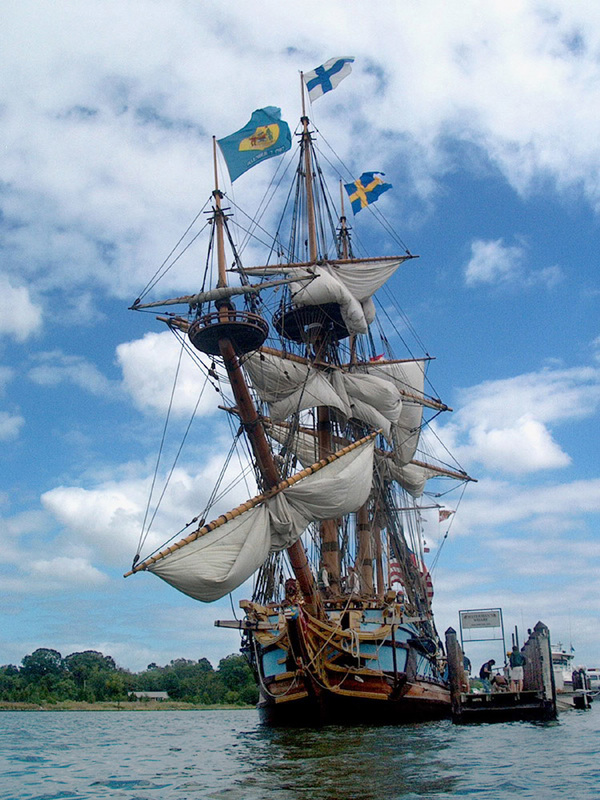 Kalmar Nyckel is a reproduction of the 1638 Dutch pinnace (a full rigged ship, many of the Downrigging fleet are schooners). Most of the year she does public sails with a mostly volunteer crew and a Captain named... yes... Morgans. I have gazillions of pics of Kalmar, some, like this, from my kayak (Solomon's Is. MD), but have sailed on her once before.

This year, friends signed me up for a Downrigging sail on Kalmar Nyckel, while they sailed on skipjack Sigsbee.

I've sailed on the doughty little skipjacks before (Elsworth and Stanley Norman). they were designed to dredge oysters, under sail. They are not fast but are powerful with an extra long boom on the mainsail. they are pretty much the boat every kid draws when they draw a "sailboat".

​Sails aren't just standing there with the wind in your face. You'll meet knowledgeable crew who can tell you the history and workings of not just their boat but others. You can grab a line and raise a sail and understand the demanding teamwork that was necessary to make these fantastic beasts (more like living things than machines) fly on the wind.

No matter what boat you're on, when you sail in the Downrigging Fleet you are surrounded by that floating timeline of history on the Chesapeake and Delaware Bays.

And one of the best photo ops ever.

Fire in the hole! The deadly beauty of cannons.

Nearly all tall ships and many small ones have cannons (even the Lady Maryland, a pungy schooner, has a tiny cannon). The historical vessels carried them, and the modern reproductions include that bit of history.

And most of them are functional.

There is a tradition of saluting ports or other ships with your cannons (firing only powder of course). Or of staging mock sea battles by maneuvering (tricky under sail) into position and firing cannon (again, powder).

I heard a tale... or tail... that some folks in Chestertown complained of Schooner Sultana's cannons which had the same effect on some dogs as thunder.

​Bring your earplugs so you can keep shooting (digital) while they're shooting (cannons).

schooners and ketches and skipjacks oh my

Ships are shaped, like wild things, by their environment and what they have to do. The full rigged ship design of Kalmar Nyckel (1638) is less maneuverable in most situations than the agile schooner... or ketch... or skipjack. Full-rigged ships like Kalmar are "square rigged", squarish sails set at right angles to the length of the hull. The others are fore-and-aft rigged, triangularish sails set parallel to the length of the hull. Of course, all sails can be moved into nearly any position to catch the wind. Fore-and-aft rigs can sail closer to the wind; they can sail more upwind, more into the wind, than a square rigger like Kalmar or a Viking longship.

Schooners have a larger rear mast, ketches have a larger front mast. On schooners the "mainmast" (the big one) is the rear (aft) one, the other is the foremast. On ketches the mainmast (bigger) is the front one, the smaller one (rear) is the mizzenmast. Ketches, historically, were square-rigged freighters or fishing boats in northern Europe. Now they are primarily smaller pleasure craft (aka: "yacht"). for further confustication, a yawl looks a bit like a ketch, except the mizzenmast is placed even farther aft.

Skipjacks are sloop-rigged (when you drew a sailboat as a kid, this is what you drew), with sharply raked masts and extremely long booms (typically the same length as the deck of the boat). The mainsail is ordinarily triangular, though gaff rigged examples were built (just google that). The jib is self-tending and mounted on a bowsprit. This sail plan affords the power needed to pull the oyster dredge, particularly in light winds, while at the same time minimizing the crew (3) required to handle the boat. ( I knew most of that but I double checked with wiki).

​All of them are highly functional working craft... and highly beautiful.

shadow of the past

Ships are not only beautiful in full sail on the horizon. A closer look reveals details of line and shape and texture most often found in nature or on living things.

I have done public sails, day sails, and guest crewed once on the Pride for a couple day voyage from Baltimore to Chestertown. I have not gone aloft. Ladders and big horses make me nervous. I fervently do not rock climb.

If you worked on a tall ship in the past... or today... someone has to go aloft (in the past, in all kinds of awful conditions) to straighten out rigging, to untangle something, to furl or unfurl a sail. Here's a small homage to the daring young men and women who dare the heights.

Here also is a demo of going "over the top". You climb over the "fighting tops" rather than through the lubber hole to get to the topmasts. Not an easy maneuver.

Modern sailors are equipped with climbing harnesses, with which they can clip themselves in. But much of the climb is done with "one hand for yourself and one for the ship", and three points of contact at all times.

You're thinking of those scenes in Pirates of the Caribeean, Master and Commander (where Hobbit Billy Boyd mans the ship's helm), or even Peter Pan... where the doughty hero helms the ship, spinning a great wheel as the bowsprit creaks slowly across the far horizon. I discovered how weird this is when I got the chance to helm Pride of Baltimore II on a guest crew passage.

Turn wheel... nothing happens. Turn wheel some more. More nothing. Turn wheel yet more... a whole lot of nothing. TURN WHEEL... great black unicorn horn of the bowsprit swings maddeningly across the horizon in the wrong direction. Turn wheel other way... nothing...

Real sailors make it look so easy. You pay attention to the horizon, to the compass in the binnacle, to what the wind is doing to the sails.

Before the wheel there was the tiller, and before that, the steerboard (hence: starboard side of boat), and before that, someone just realized that if you held your paddle/oar against the side of the boat, it turned (anyone who's ever been in a canoe knows this). Paddle/oar then gets lashed to side of boat  and you have a steerboard, as on a Viking longship. The short tiller on the steerboard, and the fact that you can look over the side and see what the steerboard is doing, makes it wasy to steer (I've steered a few Viking longships with The Longship Company). If you move the steerboard aft, you have a rudder. Then you get a bigger boat, and a bigger rudder. And a bigger tiller. And now you need mechanical leverage to move said rudder. On Sultana, this involves ropes and pulleys called steering tackle. At 97' length overall (including random spars sticking out fore and aft) even kids can steer Sultana. On Pride of Baltimore the first, the giant tiller involved pain and agony for the crew in rough seas (hence Pride II has a wheel).

Kalmar Nyckel's design predates these ships by over a century. She has a whipstaff tiller and the helm is in what I can only call Harry Potter's closet, because it is about the size of the under the stairs room the young wizard occupied.

And it is, in fact, under the stairs leading to the quarterdeck, where a lookout/navigator scans the horizon and calls commands to the helmsman in the closet.

​The whipstaff here is on a ship that is 141' length overall (counting spars that stick out). A full rigged ship that has limited agility. Basically, you have a rudder at the rear of the ship, then a big whopping horizontal stick (tiller) connected to that, but too huge to simply rope-and-pulley into cooperation as on the much smaller Sultana. Connected to the Big Whopping Horizontal Stick is a smaller vertical  stick: the whipstaff, which controls (literally giving leverage to the helmsman) the tiller.

Here's a look at how that works, with a cool on board mini-model of the whole tiller system.

Shot from the deck of the Fishwhistle, a great waterfront restaurant that was so busy that day, we could only get night seats on the outdoor deck. Good thing we had our foulies on: chilly, but great view and great food.