Gaaaahhhh! Visual spaghetti. I blew up, blew down and warped maps on Photoshop. I took pictures from the top of Skytop Trail. (The neighbors are still wondering who the crazy lady with the hippie van and the camera was). I wrangled maps and textures on Photoshop and presented a rough to the assembled crew. Suggestions were made, and (blessing upon thee oh inventors of Photoshop) I mutated the rough some more. Maps are usually rather flat, and one thing we wanted was a sort of crossbreed between a tradtional map and a landscape; the feeling of flying over the watershed. Photoshop's "free transform" element made it possible to warp the flat map without a degree in higher math and perspective. Here are some of the stages of the project...
The palette was created by pulling up the rough in Photoshop, then eyedroppering parts of it and dropping those colors into the circles. I then chose the fewest different colors (the rest could be mixed from the main colors). Photos above: aerial shots of farmland, developments and my shot off Skytop Trail north of Dover. Below left: a transparency of the rough is projected onto the wall, then drawn in chalk. Right: beginning painting: large areas are blocked out. The blue at the top began to take on an oceanic appearance: it was supposed to give a sense of perspective, of the landscape vanishing into the atmospheric distance. The textures around the shape of the watershed were less detailed to focus attention on the watershed.
Above: close-ups of some of the textures for: Lake Redman and Williams, the distant south, farmlands, the visitor's center. First I used sponges (mostly natural sea sponges), then large brushes and small (#10, #8, #4, #2, #1, #0, #00) round "white sable" artist's brushes. (Click on the pics for a larger view.) Below: a bucket of water with a spring brush holder (so the brushes could stay immersed, so the latex wall paint wouldn't kill them), muffin pan palette, stepladder (normally assists in loading kayak onto big whopping van). latex gloves (painting with sponges is messy), and lots of plastic dropcloths (varnished floor, and painting with sponges is messy). Reference photos are stuck to the wall. 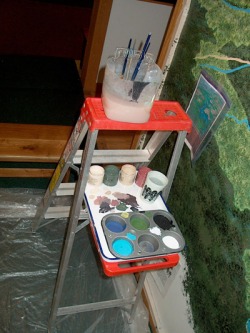 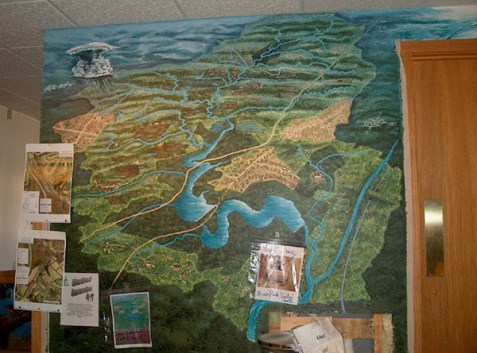