To the sea, to the sea, the white gulls are crying, the wind is blowing, the white foam is flying, west west away, the round sun is falling... na'aear, na'aear, myl lain nallol, i sul ribiel, a i falf loss reviol, na annun hai, ias annor dannol...
(Sindarin translation: Ryszard Derdinski, www.elvish.org)

J.R.R. Tolkien wrote those words, published in Return of the King, the third book of his epic fantasy Lord of the Rings, published the year I was born. That song (sung by Legolas the Elf of Mirkwood, as he strides out of the tale) has been my going to the sea song for decades. I first discovered Chincoteague Island through some of the many horse books I read as a kid: Marguerite Henry's Album of Horse, and Misty of Chincoteague. When a chapter on Misty and Chincoteague appeared in Henry's Album of Horses, I showed it to my dad.

"We should go there," he said. 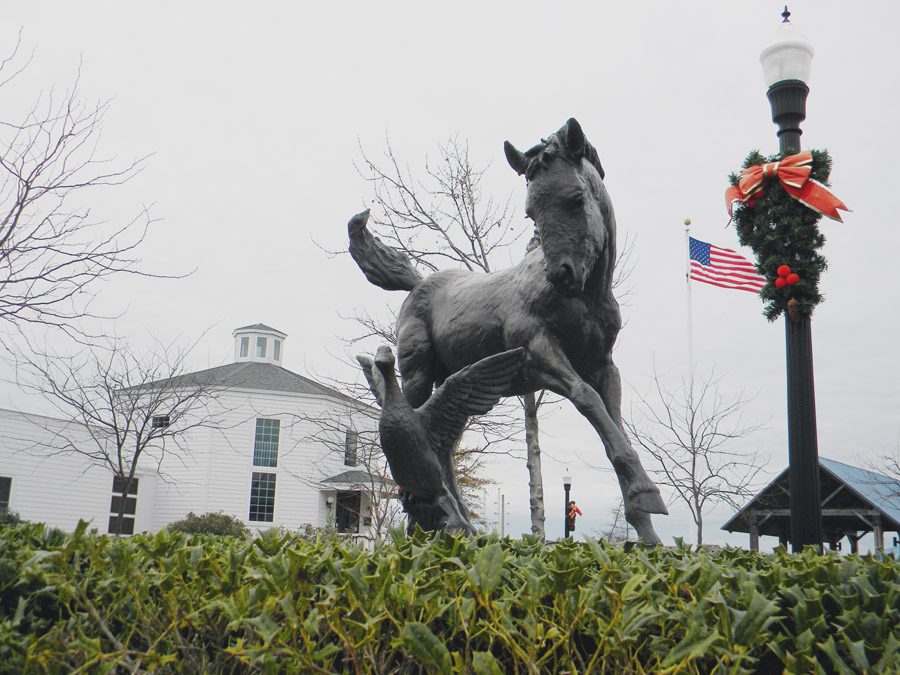 Islands of the Wild Ponies

At the edge of the North American continent, land and sea intertwine till you can't tell where one ends and the other begins. Salt marsh and loblolly wood and barrier island, bloodsucking hordes of vampiric mosquitoes and flies, endangered DelMarVa Fox Squirrels and Piping Plovers. Brown Pelicans back from the brink. American Whitetails and Sika from another island halfway around the planet.

And wild ponies, the most famous of which was Misty of Chincoteague, star of the 1947 kids' book by Marguerite Henry, illustrated by the incomparable Wesley Dennis, who thoroughly understood horses and other animals. Misty and the Beebes were real though much of the action of the tale was fictionalized. The islands are very real, and in some ways, not much changed from the wild rural backwater of the book and its sequels. Oh, now you can drive from Chincoteague to Assateague instead of taking a boat like Paul did in the Misty film. The Assateague Light now wears a coat of bright red and white stripes, no longer the plain brick tower we saw in the 1961 film. There are a few more condos and hotels, but not many. Chincoteague can be navigated safely by bicycle or scootercar. You can rent a neat waterman's cottage for a week, or stay at the Maddox Campground. You can surf, surf fish, walk the beach (except for the part reserved for the nesting Piping Plovers), poke around galleries and shops, immerse yourself in local history at the Oyster and Maritime Museum, visit the giant Viking, and browse the wonderful collection at Paynes Sea Treasures (by Pony Swim Lane). Paynes deserves special mention; a rambling collection of sheds, grown from a hot dog stand, it is like a child's dream of a treasure hunt, the tiny rooms and yard outside holding hidden treasures from the sea; shells, art, mermaids, a llama, a giant chicken, anchors, ponies... the inimitable Capt.Mr. Bob ran it for many years till his untimely passing. It still stands, run by a lovely sea spirit named Star.

Here you find the only wild horse roundup in the east. On the last Wednesday of July, the ponies make the historic swim across the channel at slack tide (when the water is moving the least). Crowds line the banks, climb trees, stand in chest deep marshwater, float in a line of boats, and a spilled crayon box of bright kayaks. Once upon a time, you would hear the crack of the bullwhips wielded by the saltwater cowboys as they came up through the marsh behind the herd. That is the traditional tool of the east coast herder (as the lariat is the tool of the western herder), it rarely contacted horsehide, a skillful flick was all that was needed to turn a pony in the right direction. It has passed (those who don't understand the art of herding might have speeded its passing). Now you wait in the light chop of the channel, listening to the sound of gulls... then you hear the shouts of the saltwater cowboys, whoops and hollers, and the ears of the ponies appear over the marsh grass. They pour out of the high marsh and into the channel... they know where to go. In 2014, some apparently swam across the channel prematurely, a few weeks ahead of time. On the last Thursday of July, the young ones are auctioned off, the money supports the volunteer fire company. The roundup itself has a long history; colonists put all manner of livestock out on the big island of Assateague, avoiding fencing laws and taxes. they simply rounded up what they needed when they needed it. The pigs and cattle are long gone, the last sheep roundup was over a hundred years ago. Now only the ponies remain.

They may be what saved the islands. To the north lies the devastation that is Ocean City; T-shirt shops and boardwalks and other alien nonsense lining the sandy shores of a shapeshifting barrier beach. When storms wipe out the human constructions, bulldozers and dredges chug sand back where the humans want it. Nothing else lives there but tourists. Back in the early 60s, developers had their eye on Assateague. They had put in some roads, some street signs. They were ready to turn it into Ocean City South. Then the Nor'easter of '62 hit. The Ash Wednesday Storm of '62. Chincoteague was mostly sunk. Assateague was blasted. The pony herd was devasted, as was wildlife. Chincoteague's Chicken City road saw its last chickens. Misty rode out the storm in the Beebe's house, giving birth not long after the storm abated to a filly named Stormy (descendants have a tradition of weather names). As the islands recovered, ponies were donated back to the herd from families who knew about the place from Marguerite Henry's book. The developers fled, deciding a barrier island might not be the safest place to develop. The Park Service moved in, and now Assateague is a string of State Park, National Seashore and Wildlife Refuge. And Marguerite Henry wrote another book: Stormy; Misty's Foal (I drew Stormy from life back in the 80s, when she lived on the island).

A pony and a kids' book brought attention to an out of the way place. Maybe saved it. Chincoteague still weathers storms: Irene, Sandy... they are a resilient island people, and the big barrier island of Assateague lies like a dragon, its tail curled protectively around the tiny egg shape of Chincoteague. The marshes absorb some of the storms' impact too, the wildlife and the ponies move with wind and tide and storm and return.

Here's a few shots over the bow of my sea kayak Mak-eh-nuk's Fin, from the hold of my vans Fearaf and Thorinduil (serving as bird blinds), from a camera stowed in a backpack, or locked in an underwater housing.

If you go, you'll want to return too, to live on island time.

click on these pics for more Assateague and Chincoteague 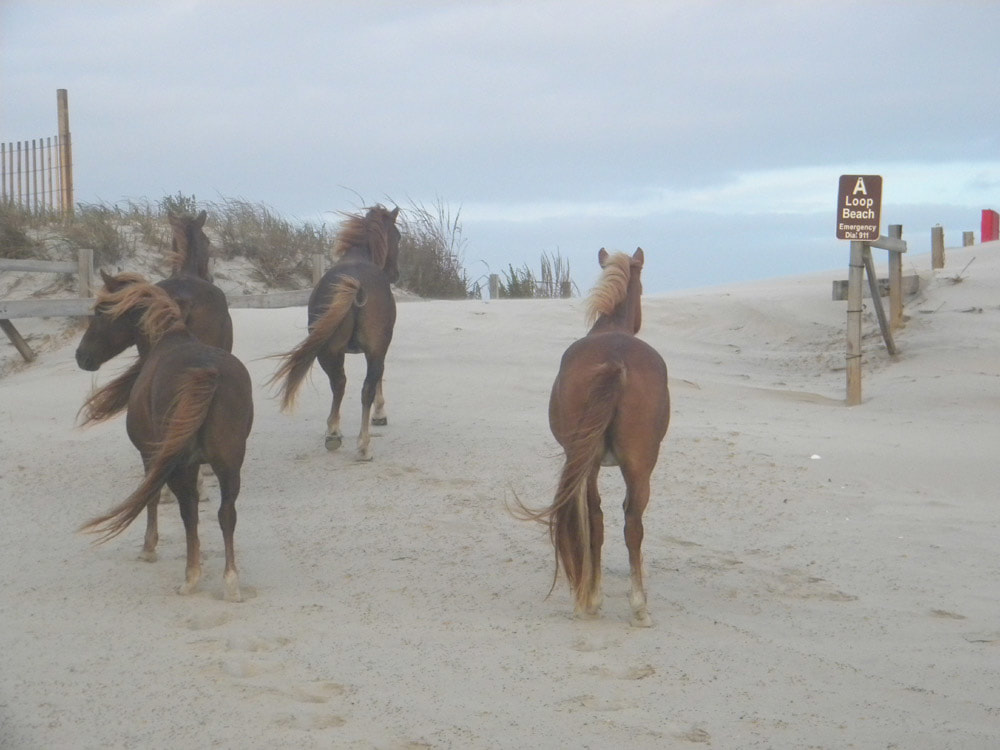 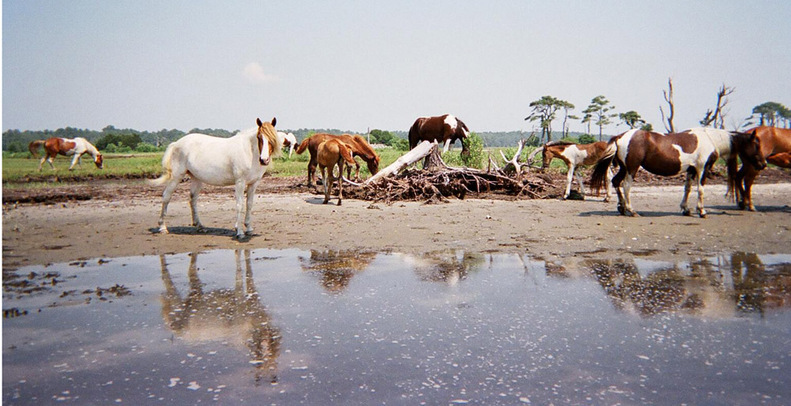