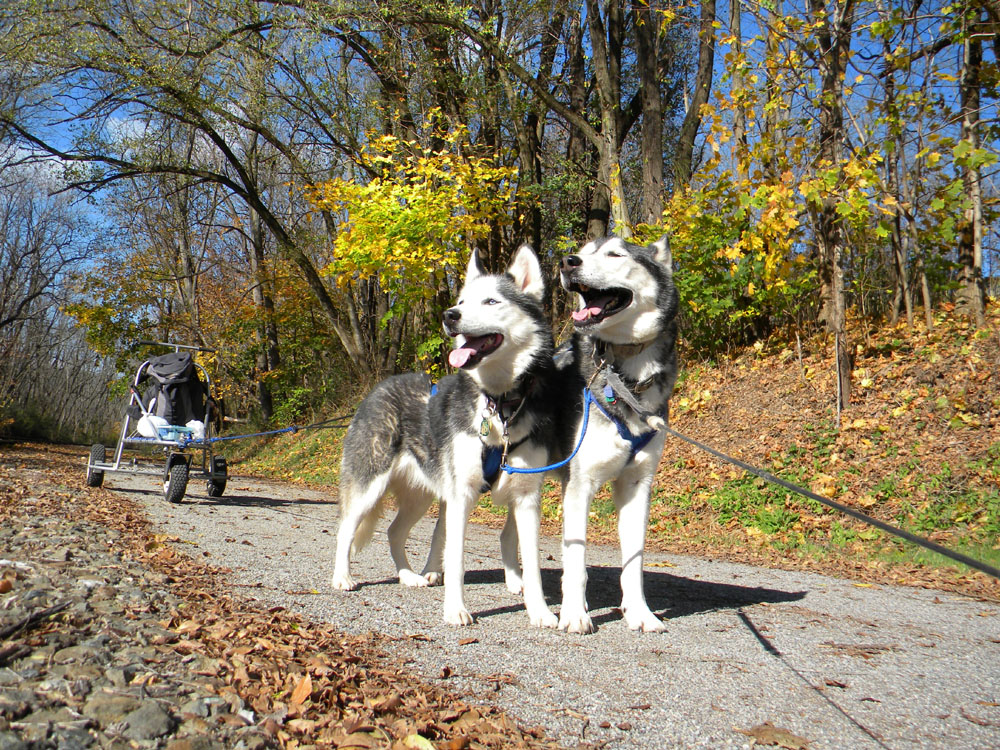 A crisp fall day, a couple of enthusiastic sled dogs hooked to a bike...

Is that a train whistle?

I am running on the York County Rail Trail, one of those Used-to-be-a-railroad-is-now-a-multi-use-trail.

Then I hear the sound of wheels; clickityclacketyclicketyclackety WHOOT WHOOT!

Oh crap... I grab the dogs with their semi-slip collars (so they don't pull out) and haul them off to the side of the trail. I see the rear end of a caboose coming down the trail towards us... backwards.

It turns out to be the Steam Into History train, a Lincoln/Civil War era steam train (running on used motor oil). Denali ignores it: "if I don't look at it, it will not see me". Leggy crawls between my knees. He's the big one, 75 pounds of Siberian Shepherd cross, named after Legolas, the unflappable archer Elf of Lord of the Rings... he is a sensitive soul. he does not approve of big snorty dragons coming down the tracks.

A week or so later, we headed out on a Saturday morning. This time I took the camera and had the dogs pulling the rig (easier to control than the bike). We came to our favorite farm/road crossing: goats on one side which cause the dogs to lurch toward them going "I can take that!" and me to shout ON-BY!... and a field full of horses (a pinto, a varnish roan Appaloosa, a chestnut horse and a chestnut mule, and one big black Percheron) on the other side. the horse farm had a table out and folks milling around as if there was a party.

There was. Steam Into History was running to that crossroad, where horse drawn carriages would take people up to the Christmas tree farm. trucks would bring the trees and wreaths and stuff back down, and the carriages would return the people to the train to steam back down to New Freedom. http://steamintohistory.com/about-steam-into-history

Meanwhile, my team got to meet Santa, the Conductor and some other nice folks bringing this bit of history back to life as well as the marvelous horse people and Percherons pulling the carriages.

Two teams of this old French breed pulled carriages back and forth to the Christmas tree farm down the road. Draft breeds like this have been bred for limited colors so it is easier to match a team. Percherons are usually grey or black, though the American registry allows for roan, bay and chestnut horses. The teams this day were a young three year old team of dark greys (born black, they get more white hairs until they are white by ten years old or so), and an older team of dapple greys (who will also turn white eventually). Both were very calm and sweet, not minding the snorting dragon on the tracks.

I am a fan of tall ships, they seem more like living things than technology, sails that snap out like dragon wings, lines than hum on the wind, hulls that sing with the sound of the waves. Steam trains are like that: they snort and puff and gallop clickety clackety down the tracks, the rods that drive the wheels pumping like legs, their steamy breath filling the sky. They settle into a station with swooshing and puffing and blowing. Even when you think they are at rest, they gurgle and burble and occasionally throw out a great snort just to remind you they are still awake.

The dogs dealt with this train fairly well. We pulled far to the side of the trail as it started back down the track. I was mindful of the steam vents low on the sides and made sure the dogs were well out of its way. If you mush on a rail trail where you might meet a train, make sure you have semi-slip collars and a good grip on your team!