photographing the wild Breyer horse in its natural habitat

I've collected model horses since I was four...and that was 1959. Breyer is the largest and best known of the model horse companies, but there are other vintage collectibles like Hartland, and modern companies like Safari and Schleich doing cool stuff.

There is a massive collection of collectors of model horses, and many photograph their horse models like you would real horses. There are also youtube videos, often kids creating stories with their horses like I did when I was a kid (but we didn't have youtube then).

Modern collectors often repaint, re-position and re-sculpt already beautiful sculptures to make unique individual horses which they show in model horse shows (live or photo).
​
Don't let your collectibles sit on a shelf, honor the artistry and beauty of these great models, tell a story, take them off the shelf and have fun.

...because you are on Assateague Island on the edge of the North American continent and the wind is gusting to gale force on the beach...

OK, I threw a handful of sand in that last one, but it was a total sandstorm below the knees and the horses kept blowing over.  This can be annoying... it can also be a useful effect. Blowing sand looks great and authentic in your shot. Spray bottles can create scale rain or mist.

Same time, same sunlight, same direction, same tree. I just moved closer to the tree and found a whole new landscape under it.

To get these effects along the shores of Lake Marburg I threw rocks, bowls of water and wiped a lot of water off my camera. I used continuous mode on my Nikon Coolpix L100 to capture the motion. You could shoot video and do a screencap though the quality would be less. Be prepared to shoot a lot of pics. Remember: water has scale! (see derps below).

Breyer traditional scale models shot on a snowy table at my friends' place. You just throw snow at them while holding the shutter (on sport continuous mode) after focusing by holding up an Eastern Neck Island waterproof map in front of the horse, then pressing the shutter while getting a handful of snow dry enough to fling...

Seriously: the first thing is to stick your camera on a tripod (or other snowproof and immobile surface). In this case I had two snow covered tables outside, facing the lovely valley of the Conewago Creek. Working on the ground would have been harder on me, and harder to stabilize the camera. This snow was generally wet and mushy (no good for flinging) but it was late and it was starting to set up and get crunchy. The snow on the tables powdered nicely. I used the Eastern Neck map (a piece of mat board would be better, in a color closer to that of the horse) because it was what was in the van and it was darkish, allowing the camera to focus on it and get the exposure right rather than underexposing due to the snowy background. I focused on the map (held against the horse), tossed the map, grabbed a handful of snow, scrunching it up to powder, meanwhile keeping the shutter release at halfmast (chirp chirp), then pressed the shutter all the way and flung the snow. Make sure you're flinging the snow in the right direction, one that makes sense with the direction the horse is "moving".
​ 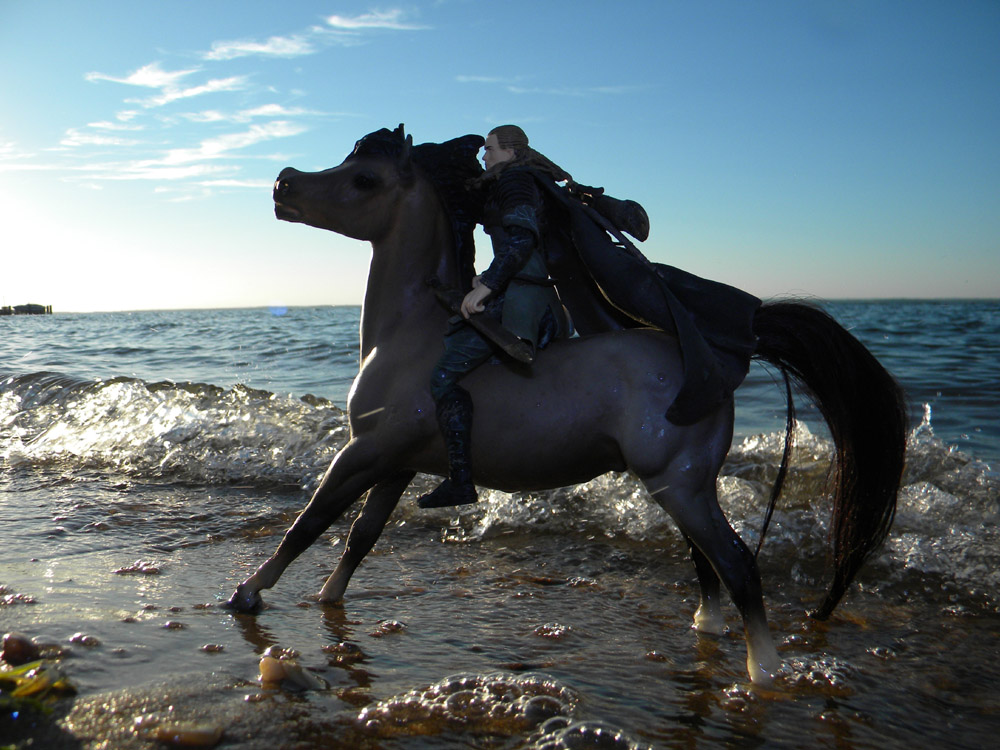 My brindle (a chestnut classic "Duchess" painted by me) mare looks totally different when photographed in open shade (shade, but with plenty of light bouncing off something, like a wall) against a white wall vs in the shade of a privet hedge (on a table with sand and reindeer moss). Beware open shade with red (or blue or yellow or whatever color) wall; it will affect your color balance. Photoshop is my friend.
One black horse (and a bay filly) in the same spot on the Rail Trail gets me a variety of lighting. Very dark or very light subjects are more challenging. Pay attention to how your subject is catching the light. Shoot different exposures if possible.

(Jackie Chan: The Karate Kid)
That moment on Photoshop when you converse like a mariner because the %*%^!! autofocus camera focused on the background and not the horse. An SLR with a lens YOU focus is easy, but the usual pretty good autofocus cameras need to be coerced into focusing on the right stuff.

You can hold up a piece of paper. mat board, grey card (30% grey camera card for exposure setting), your handy wildlife refuge map (been there) or similar object in the correct position and focus the camera on that. It should NOT be a piece of white paper; not only does the camera not want to focus on that, you'll get the wrong exposure. A piece of paper with type or squiggles works. Grey card, better. Camera on tripod or beanbag is best, then camera does not move between focusing and shooting. Your viewscreen is probably too small to check if yoru shot was focused, but if you can zoom in (blow up your preview) to check it do. It's too late to re-shoot when you've taken down your whole setup. 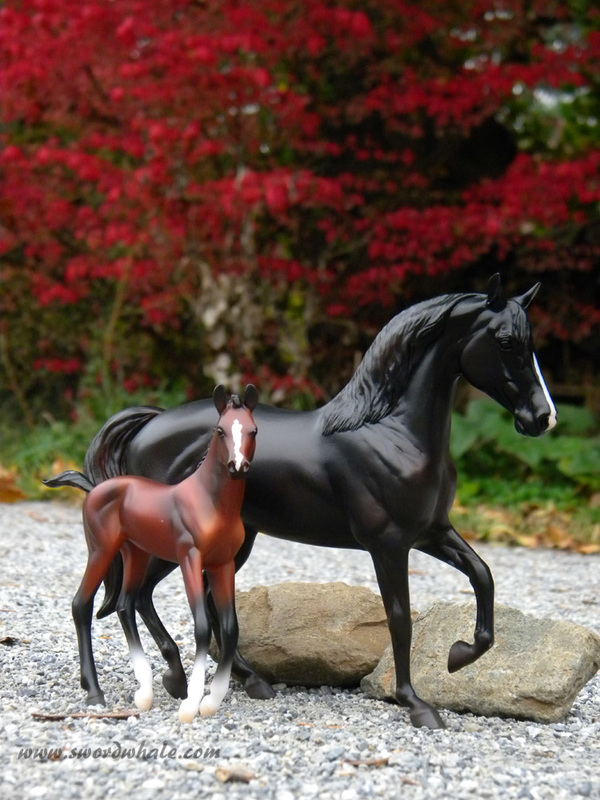 ​Below: grey card behind models focuses autofocus camera.
These very small Breyers (Stablemates series) are difficult to photograph. I needed to put them on a table to even get the camera to their eye level. I used sand and reindeer moss to create a foreground. You could also glue the moss to a board, it won't blow off. Mixing ModPodge and sand to create nice permanent sand that won't fall off is also good. I tried landscape, regular and closeup modes. Closeup seemed to work well but often I needed to focus on a grey card. The background is slightly out of focus, which is fine. Shot on location at Hanover Junction on the York County Rail Trail. The trees are real fall trees.

A table, sand and reindeer moss, as well as a few rocks, can make a great foreground for Stablemates and other small horses. I used the moss and rocks as well as a few bits of bark to disguise the edges of the table.
​
The danger is creating a "sand arena" which doesn't blend into the background. Camera angle makes a difference; a high angle shows all the horses, a low angle looks more realistic and makes the sand area blend into the background better.

A lot of these models are highly detailed sculptures, but as you go close-up, you lose detail, so most of the time, head shots are kind of bleah. The foal in this set is awesome, but close-up is clearly a model. (although, check out the detail of color in those nostrils). The mare is larger and more detailed.

Unlike shots of real wild horses, where your choices in color and size and position may be limited,
​you can choose where to put your Breyers 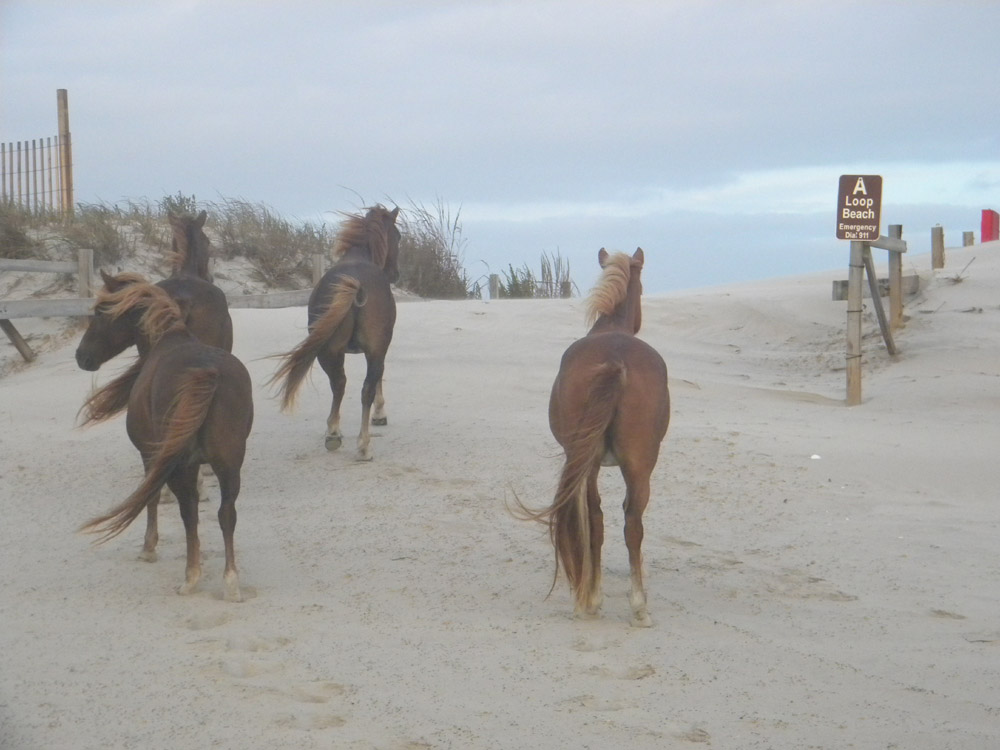 (would all the dark chestnuts with flaxen manes please stand on the left, and the red mare go to the right...)
Your Breyer herd is like a palette. Like a crayon box of joy. You can put them wherever you want. Look at them from your camera's viewpoint and place sizes, colors and poses accordingly. If you want an action shot, but don't have two dozen galloping horses, put the galloping ones in front, and the less gallopy ones behind. In the shots below, at least three horses are just walking, including the Black Stallion in the lead. Two others are rearing horses, tilted so they look like they are leaping forward (use handy rocks or something). Some splashy water hides the walking feet. Sometimes all you need is a head on the other side to show there's more horses. Don't put all your black horses, or palominos, or bays, in one spot. What kind of shapes are the heads and necks making? What kind of rhythm are the legs creating? Light against dark, color against greys and blacks, pinto against solid or Appaloosa. My instinct was to raise the camera, fly it over the herd so I could see all of them, but a too high angle and they again look like... models.

Also, pay attention to close-ups. Does your model have the detail necessary to carry a close-up? Or does he look better from a distance?

A bit of sand and some reindeer moss create a foreground. You can also make fence out of twigs, popsicle sticks or other items. A bit of random debris or rocks creates believable foregrounds. Careful of the crack in the folding table! And make sure your far edges are covered by moss, vegetation or rocks: no table edges!

Just like a big budget movie, you can use green screen. Paint a flat surface green (like a piece of foamcore or plywood, or get green matboard, or stretch some green cloth over a frame or flat surface). Green cloth works but beware of wrinkles... they will be a different shade of green and harder to remove from the photo.

It could be any other color, like blue, just not any of the colors in your horses (which tend to be in the red/yellow/black/white scale).

Place your subjects far enough from the green screen so it does not reflect on them.

Photograph them. Use Photoshop (or something similar) to combine the green screen horse with a background photo you've taken elsewhere. Select the green, all the shades of it (on Photoshop there's an eyedropper tool with a + that adds up all the shades you pick), invert so you now have selected the horse, copy and paste or drag it to the other photo. Use layer mask (NEVER eraser) to erase last bits of green (black erases) or return the parts you accidentally erased (white returns it). When it's perfect, flatten layers, save. Be sure the lighting in your landscape and on your horse matches... the sun can't be in two places at once.

Fuzzy areas like the edges of manes will retain green. Use the paintbrush tool in "color" mode to change the color to the horse's color or background color.

Judge me by my size, would you? Get out those Schleichs, safaris, tiny Hartlands, Hagen Renakers, Stablemates and play.

A shout out to Kimberley Jacobs' fabulous Breyer costumes. I've done Arabian and medieval costumes for full sized horses, and those tassels are a pain, but... just imagine doing them for a teeny tiny 1/6 or 1/9th scale model...  https://www.pinterest.com/kajac17315/16th-and-19th-model-horse-costumes/

My collection of other people's photography and models:
https://www.pinterest.com/swordwhale/horse-collection-breyer-reworked-and-original-mode/