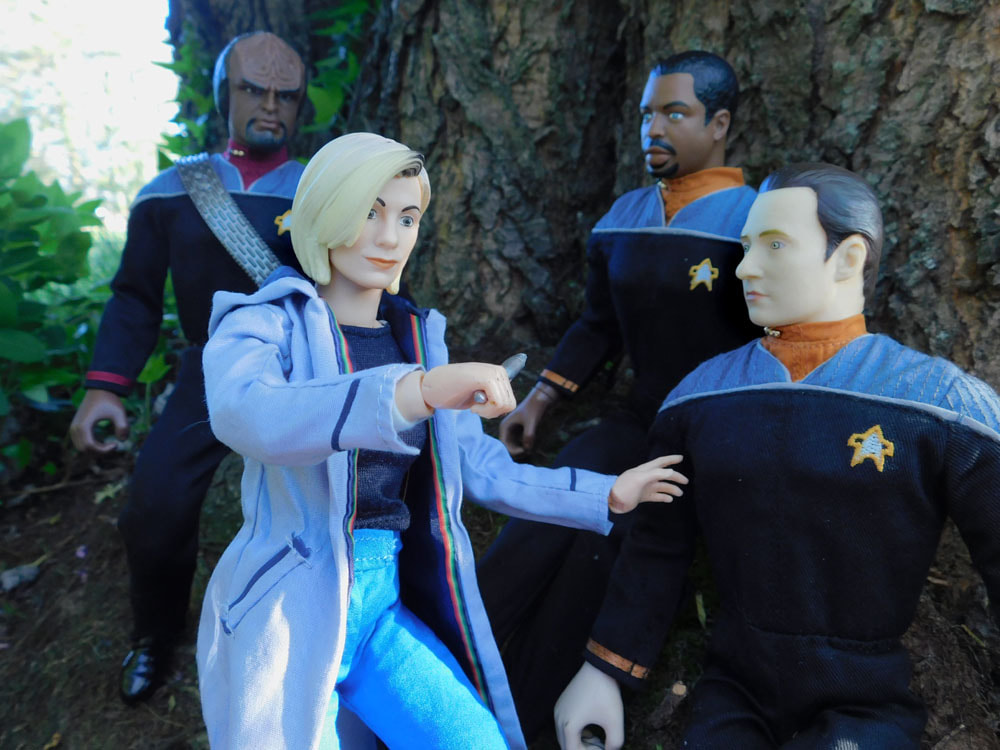 ​Don't let your toys...eh... collectibles sit on a shelf.

MerWorf and MerData investigate strange new worlds...
​
​Garden lotus/waterlily and frog pond complex, in October, with green frog.
I dusted off these vintage Star Wars figures (1977 for Han and Luke, 1999 for Qui-gon and Obi-wan) because a fellow fan asked about them... the garden pond, some hidden sticks as props, and some Barbie accessories... live shoot in the yard. 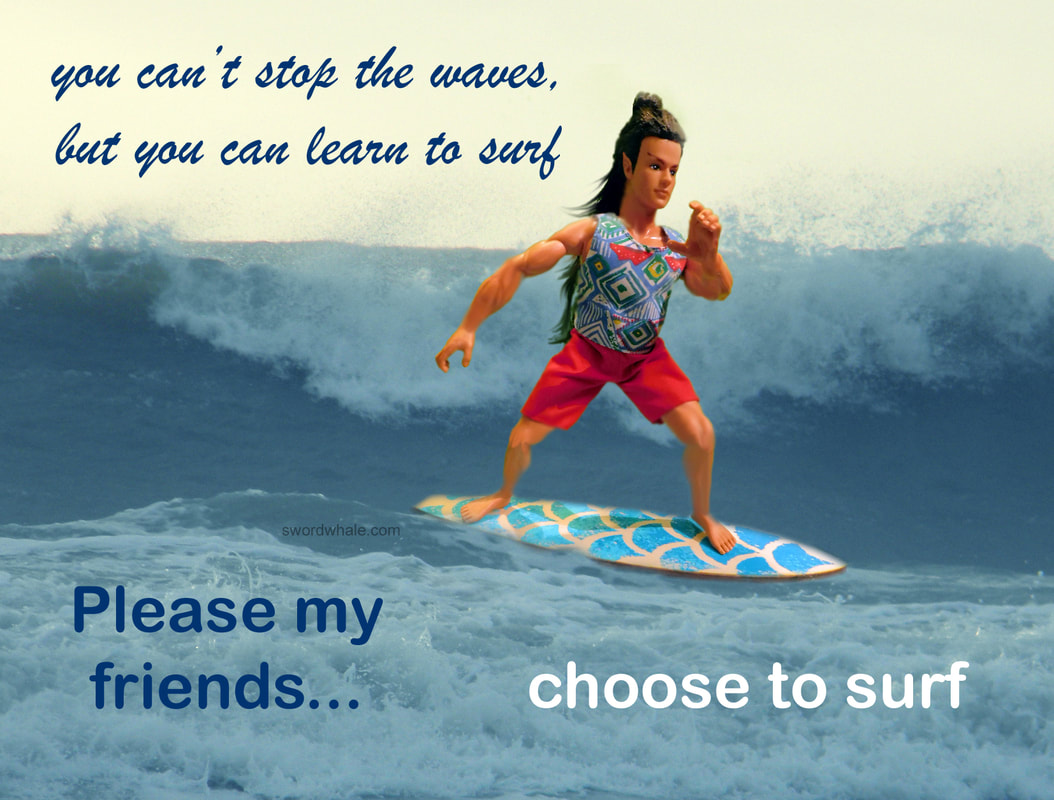 Star Trek was my first love in science fiction/fantasy (unless you count Fireball XL5, a slightly cheesy supermarionation kids show of the early 60s). Unlike Star Wars and LOTR, and HTTYD, and Pixar and Disney, I didn't collect a bunch of action figures and collectibles ... until now.

After bingeing my way through Enterprise (which I had never seen when it was released umpteen years ago) and TNG (my favorite) and Picard, and DS9 and Voyager... and landing on some Star Trek facebook pages full of fannish fun...

It was time to get some action...figures.

The very nice 12" Data appeared online in the midst of the Corona virus Plague of 2020. He is vintage ST: Insurrection ( the third TNG film), his box was trashed but he is fabulous. A nod to #updata on the facebook page Star Trek Wholesomeposting (and instagram) and her inspiring posts.

Data is definitely one of my top couple of favorite ST characters. For non-Trekkies, he's an android whose character arc is basically "I want to be human and what does that mean?". He has a childlike curiosity and sense of wonder. A good guy to have at your back.

Other Trek characters appear in the #advenaturedata (it began as a legit typo), as well as characters from other tales, like the Doctor (Who), Toothless, Groot and Rocket and more. #MalibuElnor began as "when are they going to make action figures for Star Trek: Picard (probably never)... so I made my own. He is a Ken head on a probable GI Joe body (I enjoy ripping the heads off dolls), with hair donated by Goliath, 32 year old mustang. I hadn't made him his proper costume, so stuck him in some random doll clothes and... get that guy a surfboard...

​"Buckskin" is a palomino Johnny West horse with articulation. The surfboards are from a small family business called WoodCrafter.com. I stenciled them with FolkArt stencils. Background photos are either my own starbase, or photos I have taken on random voyages.

when you can't get to the beach, send an away team...

The beach is a bit of backyard with an old rug to suppress weeds and a bunch of play sand on top. A shallow stock tank at the end, full of water plants completes it. The plants serve as filters, mosquito dunks suppress the vampires. Hank the Septopus (Finding Dory) comes on most away missions and makes zen gardens with his rake. "Spot" came from a friend and is close enough to Data's cat. The fabulous mermaid fins are Barbie size 12" doll fins from Fin Fun, who also make 18" doll fins (American Girl scale), and kid and adult sizes for a very nice price. Pink is not my color but the Malibu Pink fin was bought to use with green screen (a blue or green fin would vanish with the green screen). The Lotus Moon fin Worf is wearing I also have in 18" size and adult size.The tank top (and other clothing) is random male 12" fashion doll ("Ken") found online. Shot in 202, the Year of the Plague, so Data is using the mer top as a mask...

These two characters pose some interesting photographic challenges. They happen to be the palest and darkest of the Star Trek characters. In film and TV, each actor will have their own key light to light them perfectly. When I have photographed white egrets against dark woods, I often get a Big White Blob instead of a birb. I have to adjust the camera for the birb, then the woods tend to go dark. My real camera has a setting to help alleviate this somewhat, by flattening out the extreme highs and lows of light. Photographing my black horse or black cats or dogs also creates challenges of getting detail in the subject while not losing it in the background. Putting Data on beach sand... he's the same color, it evens out. Putting Worf on beach sand creates an effect much like an egret on a dark background, only in reverse. I shot these on the cell phone, so had to fix things on Photoshop. Worf among the water plants works very well, there are no very bright swathes of sand to burn out the photo. Shooting against sand or snow is always a challenge though, no matter who your subject is. That's why cameras often have a beach/snow setting. First: expose for your subject, worry about the background later. Or: use a fill flash/light to balance things out. Or: shoot one shot for the subject and one for the background and combine in Photoshop.

Worf and Data are probably my two favorite characters to do shoots with. Their expressions are priceless.

not sure if my garden passes Starfleet...

Commander Data's Log: it is an overcast day, with occasional light rain. A few remnants remain of a colony which chose to relocate to a warmer climate decades ago. Many of the animals they brought with them have adapted to this rich environment and prove friendly. Perhaps it is the rainy climate, but the foliage is unusually lush and large.

For Beach Party, the characters were shot on green screen in the studio. A table with a couple inches of real beach sand proved useful. Most of the time they would stand without dowel rods. I could also draw designs in the sand, as for Hank's Zen Garden.

For Surf's Up Data, the characters were shot on  green screen in the backyard "beach" a sand area deep enough to stick dowel rods into to support the surfers. The boards came from an outfit called Woodcrafters.com, I stenciled them with acrylic craft paints. I used quahog clam shells under various parts of the boards to give them the tilt. The surf backgrounds are my photos from Assateague Island VA. Dowels can be painted the same color as the green screen, or simply Photoshopped out later. If I do this again, and I will, I will shoot on green screen in the studio, and use cups of sand holding dowel rods, holding the characters up. Outdoor green screen is annoying.

One thing to be aware of with green screen: it has to BE ONE COLOR. Wrinkled material, leaf shadows (from the backyard bushes) and your own Godzilla shadow will wreak havoc on it. Bright sunlight will cast the characters' shadows on the screen if it's too close. Also, if they are too close, you will get green reflections on them (you can Photoshop that out later). Remember to try to match the lighting in both background and characters.

After placing the green screen characters on the background, and (layer mask, reveal, black paintbrugh) brushing out remaining background (green, rods, or sand surface), I flatten the layers. Then I use the brush set to color to get rid of any remaining green on the characters. Then I soften the edges of the characters with the blur tool so they don't look pasted in. I also use smudge and sometimes just a paintbrush on "normal" to smooth out the joints and articulations.

Placing characters together who aren't part of the same story is fun... it might inspire some interesting fanfiction.

"Captain, we're picking up an unusual object... it seems to be a 20th century British Police Call Box..."

One Doctor is fun, but when you add The Doctor from Star Trek: Voyager (the Emergency Medical Hologram), things could get interesting...

I usually use my Nikon Coolpix B500, which allows for more ability to focus, frame and adjust lighting and color. Then I run it all through Photoshop. These were shot in a few minutes in the front yard with the cell phone. It's far harder to see what's on the screen in even the light of this cloudy day, much less bright sun. I don't have that issue with the camera. Also it's harder to hold the phone, and hit the shutter while focusing properly and getting the right exposure. The advantage is I can immediately upload to Instagram or Facebook. While I can crop and adjust on Instagram (I find most of the filters useless, most of the time), I can't on FB. So making sure my hand is not onscreen is fun here...

Data either stood on his own, leaned against things, or I have hold of a foot or hand out of frame.

My favorite characters from The Original Series (TOS) back in the 60s. Sulu here is about 12" tall. Spock is about 8". Which makes for some interesting problems... not to scale with each other. So you either put the smaller figure in the background, where they look like they are far away, or you put that one in front, where perspective makes them look larger. Now of course, you can't pull the same focus on both. You could, of course, Photoshop them into the same picture at the same scale. These shots tho were done live in the backyard. Spock is by Mego. Sulu by Playmates (who also did my Data and Worf).

go outside and play

"Exploration of Class M Planet" was shot live in the yard. A tiny cedar tree served as a perch for Data, a huge silver maple served as an entire landscape. And whatever planet that is, the dandelions are HUGE.

​"Police call box" aka, The Doctors, was also that bit of the backyard. Geordi LaForge is the one from the film, Insurrection, so he has basically bionic eyes by then and is missing his trademark visor.


Shooting in the Wild​
Green Screen and studio shoots


The first Data and Toothless pic used a great photo from Calvert Cliffs, on the Chesapeake Bay. It was a long hike to that beach, and I have a few photos of this unique geological formation (fossils!!!). But it's a bit cluttered for a background. The second pic (a seascape from Assateague) worked better.