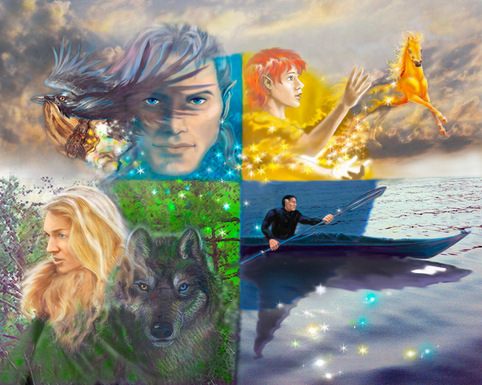 The Earth Life Foundation (E.L.F.) has its roots in all of the fantasy/sci-fi/comic books/horse stories I read as a kid. It also draws on my real life experiences feeding hotdogs to the "quarry pirhanas", decorating Christmas trees and carving pumpkins underwater, sailing on 1812 era privateers, wrangling hawks, owls and barfing vultures for wildlife rehabbers, training the Wild Black Mare and mushing a small team of huskies through the wilds of a PA farm country trail, kayaking the wilds of the Chesapeake Bay watershed and Assateague and Chincoteague islands, and being a mermaid.
The Swordwhale of "Swordwhale Walking" appears in several stories:The Barrier Island Trilogy and Fins.

The largest of the oceanic dolphins (dolphins are toothed whales, the other kind is baleen whales) is orcinus orca, aka orca, killerwhale, swordwhale, and a thousand other names in each language. My European ancestors would have called them swordwhales. These intelligent, social creatures live in nearly every bit of ocean, come cultures saw them as the wolves of the sea, living in social groups, helping each other with hunting food, raising the young, and caring for other members of the pod/pack. In places where there are seals, there are legends of the sealfolk who take off their sealskins to walk on land in human form (selkies). Similar legends exist of the whalefolk, who take off their fins... the fin becomes a boat.
​
Swordwhale (walking on land): David Michael (Mike) Shaughenssy: Marine biologist, underwater filmaker, educator... and orca shapeshifter. He won't say how old he is, but he did watch the first humans cross the Bering Land Bridge. He often deflects questions about his specific ethnic identity... since he isn't actually human. He is most familiar with peoples of the Pacific: he hung out with Polynesian navigators, lived on the various coasts of North America (northwest coast is a recent favorite, where in Kwakiutl, he was known as Mak-eh-nuk), and he swam to China more than once.  In orca form, he lives in a world of sound. On land, in human form, he lives in a world of vision: he's Deaf. Martial artist, immensely strong (what part of "orca" do you not understand?) and can use sound to stun opponents (as real orcas do). Loves kids, hates ceilings (you can't surface through them). Likes boats if he doesn't have to go belowdecks. When he shifts from orca to human form, the six foot dorsal fin becomes a surfboard, kayak, canoe, waka, skipjack or other non-powered small boat. To return to orca form, he must have sufficient water, and the fin.

There are several Grandmother Swordwhales as well. Most are the orcafolk shapeshifters. One is a whale mermaid who breathes air and can shapeshift to human form. Other merrows are half fish, breathe water or air as needed, and do not shift shape.
​If you didn't get the "APP" joke... apps aren't just for phones and stuff. App is short for Appaloosa, a "leopard complex" (various spotted patterns) breed that originated in the American west. Other breeds like Knabstruppers and Noriker, Pony of the Americas, Colorado Rangers, Tiger Horse and British Spotted Pony and Tannu Tuva have the leopard complex genes as well. The pattern also appears on ancient cave art.

Tales of the Earth Life Foundation

Actual hardcopy books on the way, you know, the kind you can stack, carry, smell, wrinkle...

​The stories are mostly aimed at middle readers and up, and are about the adventures of various young people who become part of the Earth Life Foundation's efforts to save the world. The tales may contain a grumpy Shetland pony who is more than he appears, Possum Woman, kayaks, pirate ships, Bran-Ravenkin-Sailor of Wind and Sea, sled dogs, a swordbroad, a 167 year old teenager with a short attention span, wild mustangs, pookas, Dragonkin, Elves, Dwarves, really cool technology that will save the world, mosquito infested salt marshes, mermaids and merrows, travel between worlds, magic swords, and a swordwhale. Stupid Gravity (a mermaid's blog) is "picture book format and may be suitable for younger kids too. A few are Middle Earth based fanfics of the PG or PG-13 variety. One original short story is suitable for older teens and adults (Following Raven). Nothing is over what we'd call PG-13. Click on the blue type to go to the stories.

Black Horses: Valerie Swartz (rhymes with warts) is a huge neurospicey nerd, who seems to fit nowhere. Not in school, not in her quiet not quite rural neighborhood with its garden gnomes and bushes trimmed like they fell out of muffin pans. Not in the riding stable where she trades manure moving (onto the ever growing Crapzilla) for lessons.

Then one winter night she comes to the aid of a strange horseman, and realizes her seemingly mundane backyard is weirder than she ever imagined.

“Hey mom, gotta run an errand in an alternate universe, I’ll be a little late…”

A spicey bent quest that gallops over the woods, marshes, rivers and tumps of the Chesapeake Bay to the islands of Chincoteague and Assateague and beyond.
​
A stand alone tale that takes place in the same ELF world after the events of the Barrier Island Trilogy, it gallops over much of the same Chesapeake Bay and DelMarVa land and seascape, but with new surprises. It is being published in paperback and will get an edition with interior illustrations. Photo illustrations here: https://www.swordwhale.com/black-horses.html

Barrier Island Trilogy part 1: The Merrow's Cap: Stranded on a touristy island in Virginia, Sharkman is going to have a summer that really bites... 19th century pirate ships sailing the 21st century, a merrow who has had his only connection to the sea stolen, dangerous weather shifts, and a world out of balance.

Welcome back to Chincoteage and Assateague Islands, land of wild ponies and saltwater cowboys... life is about to get weird.

Barrier Island Trilogy part 2: Manannan's Horses:  Pirate ship Roane is gone, and with it Bran, Ravenkin's last feather, grounding him for eternity. Can Jason, Cait, Zan and Morgan solve the mystery around the Roane, and regain the Ravenkin's powers? They might need some help from the Horses of the Sea.

Barrier Island Trilogy part 3: Mak-eh-nuk's Fin:  Cait, Jason, Morgan and Zan continue to unravel the mystery behind pirate ship Roane, (named after a seal shapeshifter), Margo (who is apparently stuck in the wrong century), and the End of the World. For this journey they're gonna need a good boat... or dogsled... or two... can the fin of their orca shapeshifter friend carry them on the biggest journey yet?

Fins: Landlubber Nai'a must make a dangerous voyage to save a life. Harder still is finding her place in the world her mom loves. https://www.swordwhale.com/fins.html

Following Raven: When evil befalls a family pet, the mundane world holds no justice. But Raven and Wolf are far from mundane... This one was inspired by an actual newspaper headline, and the desperate need for justice for animals... suitable for older teens and adults. https://www.swordwhale.com/following-raven.html​

If Wishes Were Elves, Even Fangirls Would Dance: We've done it now! Our favorite Elves are blundering around 21st century Pennsylvania. Sweet! But we have to put them back; we've horribly changed the tales they came from. Only we don't know how... A LOTR/Marvel Comics fanfic... or at least I've borrowed a couple of their characters and dropped them kicking and screaming into the world of the ELF... https://www.swordwhale.com/fanfiction-if-wishes-were-elves.html​

LEYOVER: wildlife rehabber and raptor expert Marshawk goes to Ireland, and discovers the weird was always right under her nose...
https://www.swordwhale.com/leyover-and-bardic-circle.html​ 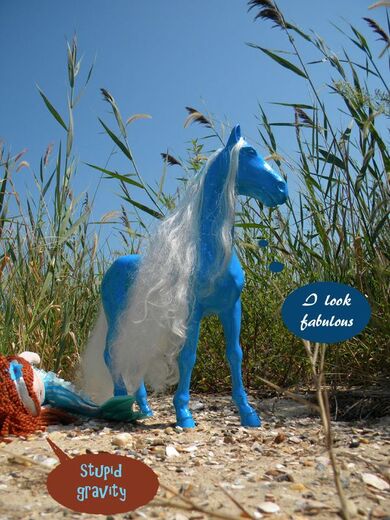 Follow the real life adventures of a (plush) mermaid and her friends as they explore the lands around the Chesapeake Bay and DelMarVa Peninsula. Problem is: mermaids, stupid gravity. So how do you explore land? With seahorses of course! If you can stay on... https://www.swordwhale.com/mermaid-tales.html​
I'm going on an adventure!
Photo journeys and real life expeditions ​you can do too! Click Zan... 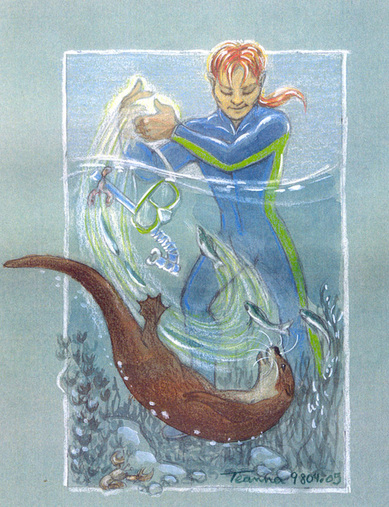 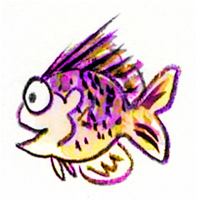 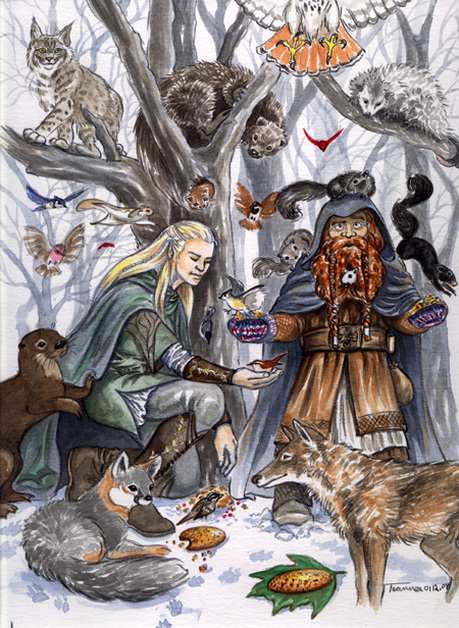 Tales of the Elf (the one from Middle Earth)

When Lord of the Rings hit the big silver screen, thousands of screaming teenagery girls latched onto a character I'd loved since I first read the books in 1978 (when Orlando Bloom was yet in diapers). Mr. Bloom did a fine job of evoking the Failthful Elven Sidekick, Prince of Mirkwood, and Kickbutt Archer, so much so, I'm doomed to fandom for eternity. The thousands of teenagery girls fired off masses of lovestruck verbiage, much of it missing many details of the character. I armed my ancient word processing program and fired back... here are a few of my missives; some adventures Tolkien had never thought of, and never would have. Click on Legolas and Gimli, above. (PG-13)