animal alphabet and counting one to ten 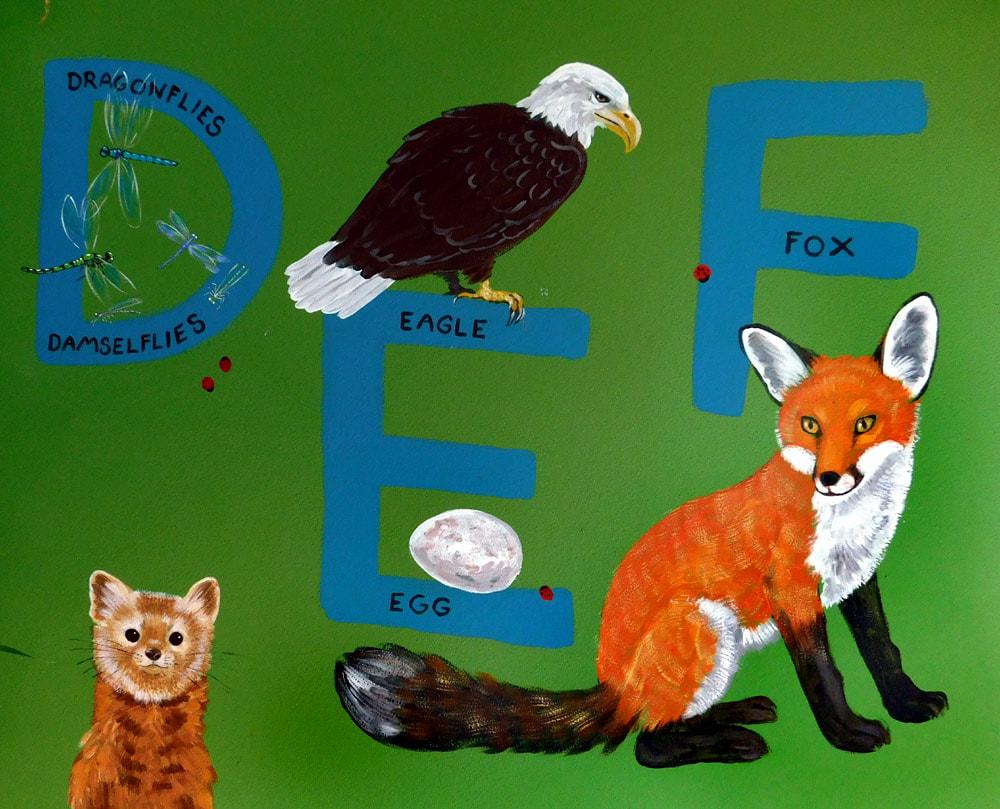 Boetcher House in Lancaster PA has a nature based daycare, and needed some murals of an alphabet and one to ten counting with animals. Rather than painting on the walls, the murals will be on 1/8 inch masonite, 3 x 7 feet. This makes them easier to work on, and easier for the park to move them as needed.

First, I did some Photoshop roughs of potential designs, fiddling with color and placement of letters. The animals will weave in and out of the letters/numbers, drawing the eye left to right the way you'd read.

I preferred the blue and green panels and letters... they will be a background for the animals, therefore kind of neutral while the mostly brownish animals should leap off of it. 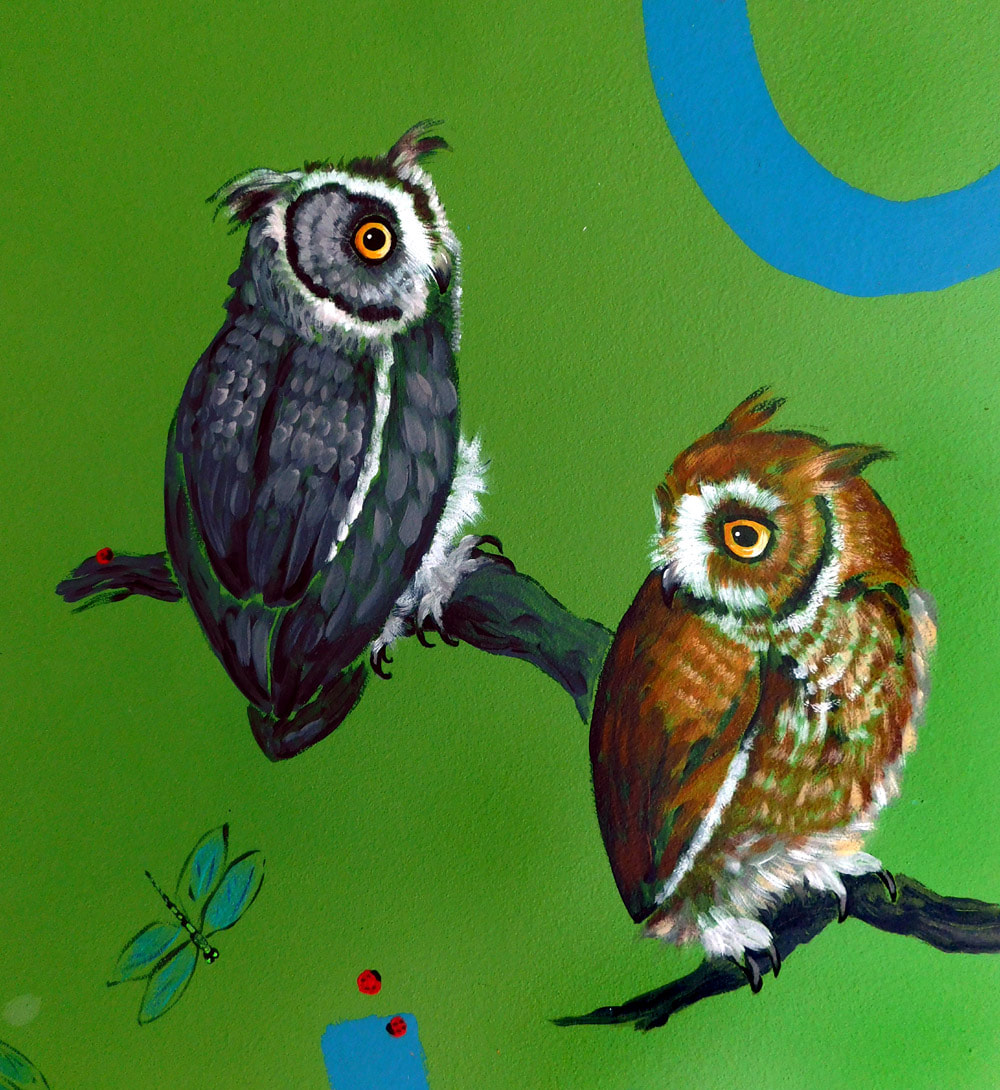 I color coded the categories of animals (easy to see) so I didn't end up with too many fish or birds or whatever.

This was more the idea of large animals for small numbers, and small animals for large numbers, with some familiar ones and some more obscure, like the fisher and the green heron. 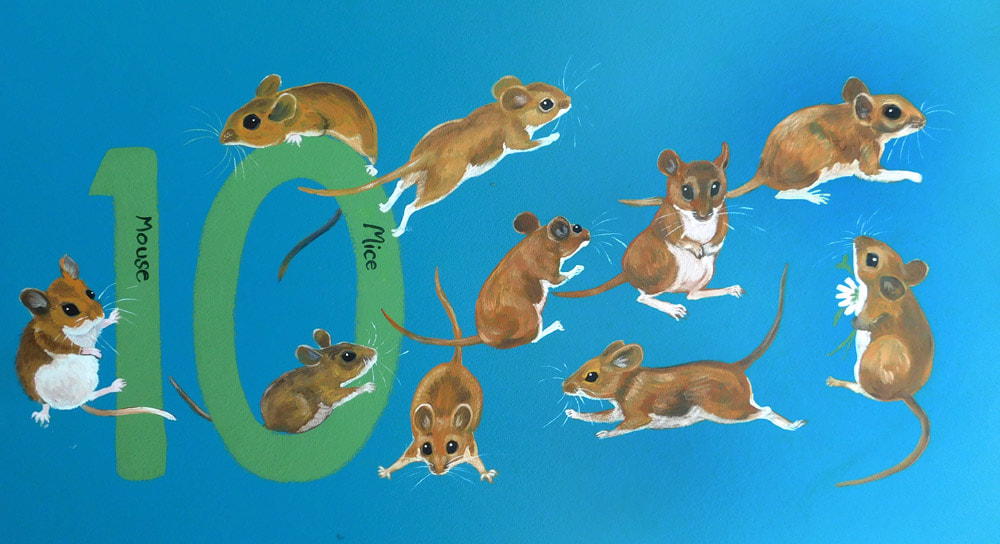 The animals have all lived in Pennsylvania, or do. Some, like the Allegheny woodrat are endangered or rare. Some, like the coyote, have moved east over decades inhabiting the environments left vacant by wolves that were killed off by colonists. Some, like the toad and blue heron, were from my own photos (the toads inhabit my garden, the herons are a common sight on kayaking trips), the screech owls were from a friend's photo (Dave Tristan) from a couple owls we met at Downrigging Weekend (they belonged to Scales and Tales, an environmental education center). The style is not photorealistic, rather realistic and accurate but fun and stretched just a bit toward the cartoony.

The panels are masonite painted with Behr latex house paint (rich and dense, one coat nearly did it). The animals were painted in the same paint in several colors: the turquoise, green, a burnt umber, a burnt sienna, a rich yellow, white, black and red. I also used some artists' acrylics and craft acrylics (Americana and Folk Art, both dense and rich).

I sketched the letters, numbers and animals in chalk first, then painted them.

They did not fit very well in my art room, but I managed.

Opaque paints like house paint and craft paint present a problem; they don't mix well... you can end up with mud or chalk, yuck. But with careful mixing (only two or three colors) you can achieve the shadings and colors needed. I also used a Folk Art "color shift" turquoise for parts of the violet green swallow and the dragonfly wings as well as the wings of the bat's prey. It shimmers depending on angle of viewing.

Reference is vital. Don't count on your faulty memory of what something looks like. I got an Amazon Fire and downloaded photo reference onto it for use in the art room. A knowledge of anatomy is useful, don't simply copy someone's photo!

You can see now where I changed my list of animals as I worked... for instance, I realized there were no owls... so O has both an otter and owls. E has both Eagle and Egg. Som eletters were impossible... no zebras in PA. And nothing with an X.

So I used a zebra moth, and a sphinX moth.

​It would have been impossible to do everyone to scale, either life sized (nope, bears not fitting there) or to scale with each other (there would be some very tiny birds)... rather animals were done to have them fit on the page with their letters in a visually interesting way.