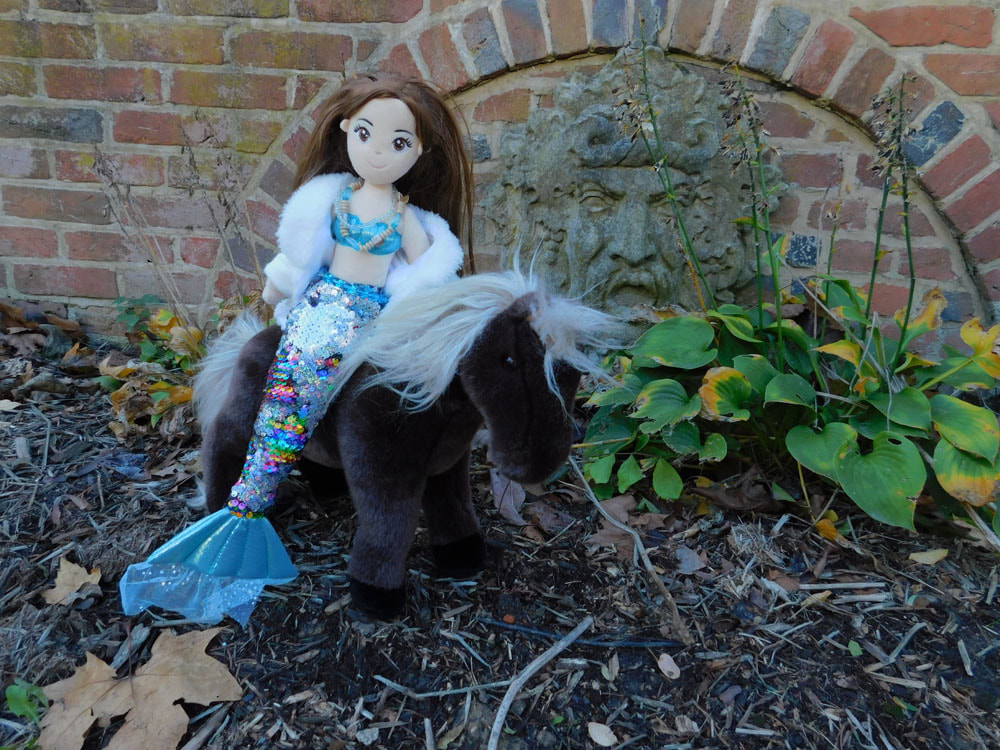 Hi! I'm Courtnee, I hail from the lovely island of Chincoteague, or, rather the waters around it.

Gingersnap is my Chincoteague pony. I can't walk on land, so she carries me...

...unless I fall off. Stupid gravity. We don't have to deal with gravity in the water. We float, we fly, we flip our fins and get pretty far. We move north south east west and up and down. On land, we need a pony to carry us up and down hills or stairs or... 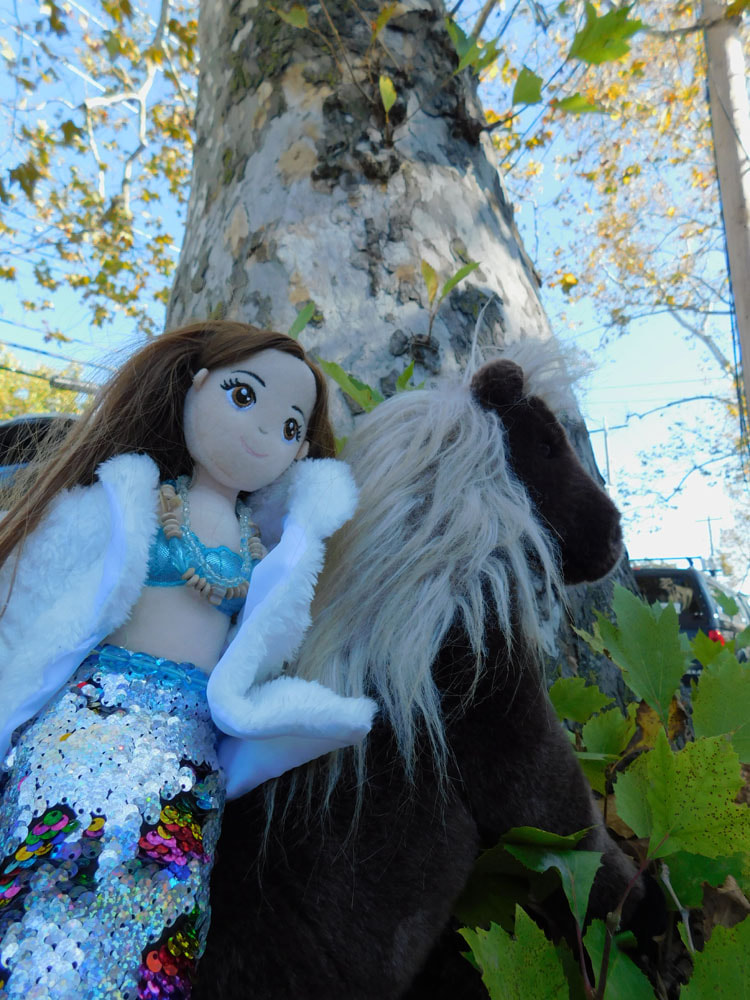 We heard there was a big festival here, at the end of the human's sailing season. They call it Downrigging because that's when all the ships with sails take down their rigging, so they can be tucked away safely for the winter.

Rigging is this... lots of branches and lines to hold the big wings that make the ships fly on the wind. 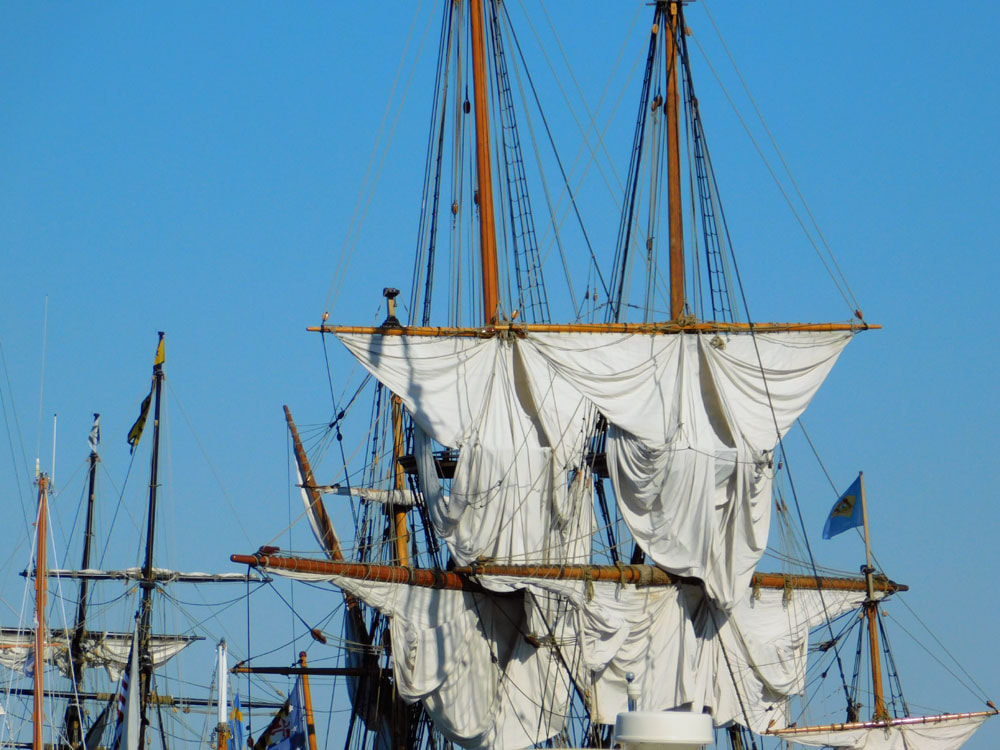 We went down to the waterfront to get a closer look at the ships as they left for a sail down the river.
They all have names. They are all different sizes and shapes and colors. And from different times.

Kalmar Nyckel, full rigged ship: 1630s
Schooner Sultana: 1769
Pride of Baltimore II and Lynx, "Baltimore clippers": 1812
Lady Maryland, pungy schooner: 1850s to early 1900s
Sigsbee, skipjack: late 1800s to now
Most tall ships have cannons like they did in the past. Today they fire powder, not cannonballs, to salute other ships or ports as they come near. They sometimes have mock "sea battles" to see who can maneuver the best under sail. Changing direction is much harder on a big ship than on a small pony. There is a whole dance of crew running back and forth heaving and hauling on lines.
Lynx and Pride of Baltimore II are "sharp built schooners", or Baltimore Clippers. In 1812, they helped America secure its independence from Great Britain. There was only a tiny navy in America, so letters of marque and reprisal were given to anyone with a boat to be "privateers"; flyers ran the blockades and got food and supplies back and forth, sea wolves commandeered stuff from British merchant vessels. The small, wicked fast and agile privateers evolved out of the shifting sandbar ridden waters of the Chesapeake Bay. They are often schooners, with both fore and aft rigged sails (the big wing shaped ones that go from front to back of the boat), and square topsails.
The Sultana Education Center is named after their tall ship Sultana. Inside, you can learn all about the Chesapeake Bay. One of the activities is build your own boat and see if it floats... with a bunch of lead weights in it. Like, how many lead weights can you fit in it? Oh, and here's a piece of aluminum foil, some popsicle sticks and some duct tape.

​I wonder what popsicles taste like...
They also had some local critters: some turtles like the diamond backed terrapin that loves marshes and the bay... the red eared slider who, along with the painted turtle, loves ponds and lakes... some owls and hawks too.
Later we explored Chestertown. The town began in 1706, and was an important port where ships could some up out of the sea, into the Chesapeake Bay, and up the Chester River to deliver stuff that humans need.

Lots of pretty, old brick houses. The brick is laid in all kinds of different ways. People paint their houses, porches and steps in wonderful colors. This weekend is Halloween, so many pumpkins and scary decorations abound. There are also lots of old trees, and leaves everywhere, and plants and flowers and birds.
Chestertown has lots of ducks...
As the sun sails into the west, lights come on, on the docks, illuminating the ships.