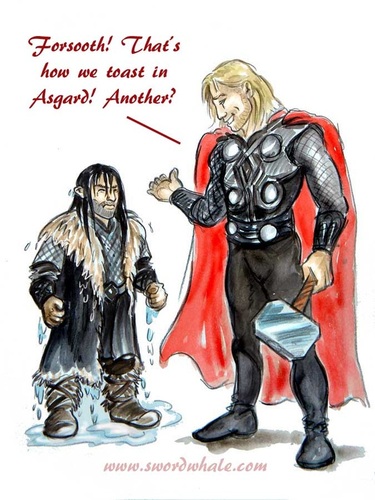 (a really brief history of my time in Middle Earth)

In 1977, a wild black mare was born on the high desert of eastern Oregon (I'd meet her, and she would train me, in 1985), another "wild black mare" was launched at Inner Harbor Baltimore (I'd sail on her sister, the Pride of Baltimore II, on Halloween of 2007), Star Wars hit the screen, and a fellow fan dumped a pile of reading material into my hands. "You must read this," she intoned. I stared at the stack of verbiage and paled. Lo!, in my copious free time, somewhere in the next millennium. The epic tome was J.R.R. Tolkien's Lord of the Rings.

Somewhat later, I borrowed a tent from a second cousin twice removed, so I could spend a week on a desert island called Assateague. He told me about this game they played: D&D. I showed up, rolled up a character, waved the paper at the DM and said, "What do I make of this?"

"What?" You mean like Hermie, in Rudolph the Red-nosed Reindeer?

"Read Lord of the Rings."

I did, in 1978. Thirty years, many fantasy illustrations, several "fanfics", essays and re-readings later, I'm still a fan of the original fantasy epic that spawned the rest (LOTR was born the same year I was).
When Lord of the Rings hit the big silver screen, thousands of screaming teenagery girls latched onto a character I'd loved since I first read the books in 1978 (when Orlando Bloom was yet in diapers). Mr. Bloom did a fine job of evoking the Faithful Elven Sidekick, Prince of Mirkwood, and Kickbutt Archer, so... I'm doomed to fandom for eternity. The thousands of teenagery girls fired off masses of lovestruck verbiage, much of it missing many details of the character. I armed my ancient word processing program and fired back... here are a few of my missives; some adventures Tolkien had never thought of, and never would have.
Click on Legolas and Gimli, above. (PG-13)

Below: a few banner designs for theonering.net's facebook header quest (send us your designs, they said, so I did!) 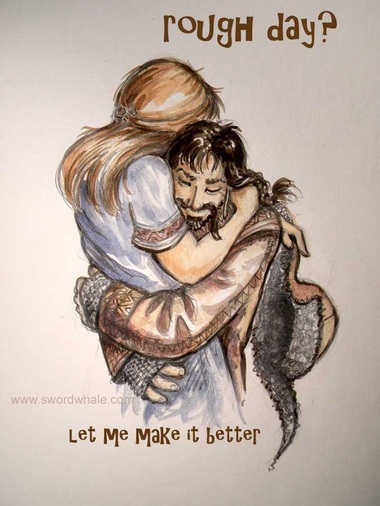 As you can see, I'm pretty Elf-centric. That's my archetype (more on that at the bottom of the page). I always preferred Lord of the Rings' epic detail to the Hobbit's read-aloud style done in the ancient oral tradition (the details are sparse, and the listener fills in those details from their own experience and preferences). Then Peter Jackson turned Hobbit into a film... no, wait, three. And WETA Workshop designed thirteen of the most awesome (and Majestic) Dwarves ever. I did a few cartoons, occasionally throwing my characters into fandom. (favorite Dwarf; one of the "brothers "ur" who come from the north: Bofur... perhaps because he looks like a musher...or perhaps because he's the kind of guy that, when he doesn't give you a valentine, it's because he thinks every day with you is special).

On Faerie Tales... and Elves

"Archetype": An archetype ( /ˈɑrkɪtaɪp/)  is a universally understood symbol, term, or  pattern of behavior, a prototype upon which others are copied, patterned, or emulated. Archetypes are often used in myths and storytelling across different cultures. In psychology, an archetype is a model of a person, personality, or behavior. In philosophy, archetypes have, since Plato referred to ideal forms of the perceived or
sensible objects or types (according to Wikipedia).

The Elf archetype was one that I recognized when I saw Judy King-Reniets' illo of the Fellowship of the Ring ("Who's the blond guy on the right with the longbow?"), when I read Lord of the Rings. Others seemed to recognize it too: the kid who sat behind me in art school and sai: "You look like an Elf in that shirt." (It might have come from Galadriel's yard sale), or the DungeonMaster who said, "Play an Elf."

Tolkien wrote the archetypal modern fantasy, based somewhat on ancient myths of the North (Norse) and British Isles (Celtic and Arthurian). His characters are recognizeable to all of us because they are archetypes, with just enough individuality to be real, and enough space left for us as readers to fill in the blanks from our own experience. Some readers relate to the Hobbits, some to the Dwarves, my heart has always run with the Elves, the Magical Child, the Nature Child, the ones who talk to trees, horses and rocks, who wax eloquent over the distant cry of gulls in the dark, and who will not rest until they reach the sea.

Here's my musings on the Elvish archetype, and one in particular, That Darn Elf, the Blond Guy with the Bow... 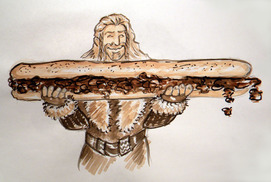