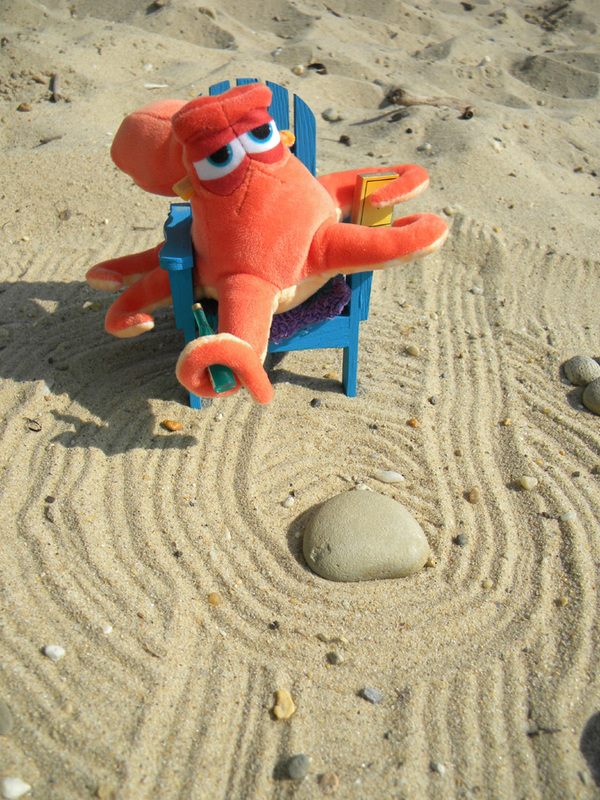 Hank the octopus, er, septopus (he has seven legs due to an accident at sea) as Dory dubbed him in Finding Dory...was one of the best characters in all of Pixar's films. A visit to Toys R Us landed me nearly no Dory toys at all. I was hoping for a great big plush Hank at least. Lurking in a corner of a shelf, mixed in with some other genre of toys, was one tiny plush Hank (when I went looking for more, I found none, he was the last).

​He accompanied me on an expedition to Rock Hall MD, where he chilled on his beach chair, and made his own zen garden...
Hank's zen garden has rock mandalas I painted on skipping stones from a lake in New York (when friends asked what they could bring me I said rocks). The rocks with words on them are from the Chesapeake Bay. This second set of pics is also from Rock Hall... in December 2016.

The words are Hawaiian:
Aloha is the all purpose word whose basic meaning is love.
Moana is ocean.
Hoe wa’a is paddler (like us and our kayaks).
Ohana you know if you paid any attention in Lilo and Stitch.
Mana is kind of Hawaiian for ‘use the Force Luke”… it’s spiritual energy or power.
Pono is doing the right thing.
Wa’a is canoe, specifically the sorts of outriggers used in Polynesia. In other places they are waka, vaka or va’a.
Wa’a kaulua is a big double hulled voyaging canoe like the ones we saw in Moana (the film) or on moana (the ocean) for thousands of years.
Aina is land, earth, environment.
Malama honua is caring for island earth.

Hank chills on a beach perfect for zen gardens. Here, at the mouth of the Delaware Bay, there are lots of bay pebbles, scoured round and smooth by wind, tide and sand. We were there for the great horseshoe crab spawning in May 2019. We arrived on a falling tide, so the crabs had gone back into the bay, waiting for the next high tide. Plenty of seabirds, semipalmated sandpipers (about the size of a small sparrow) and the odd boat tailed grackle were hanging out. And one mermaid...