there and back again
​

one day in November 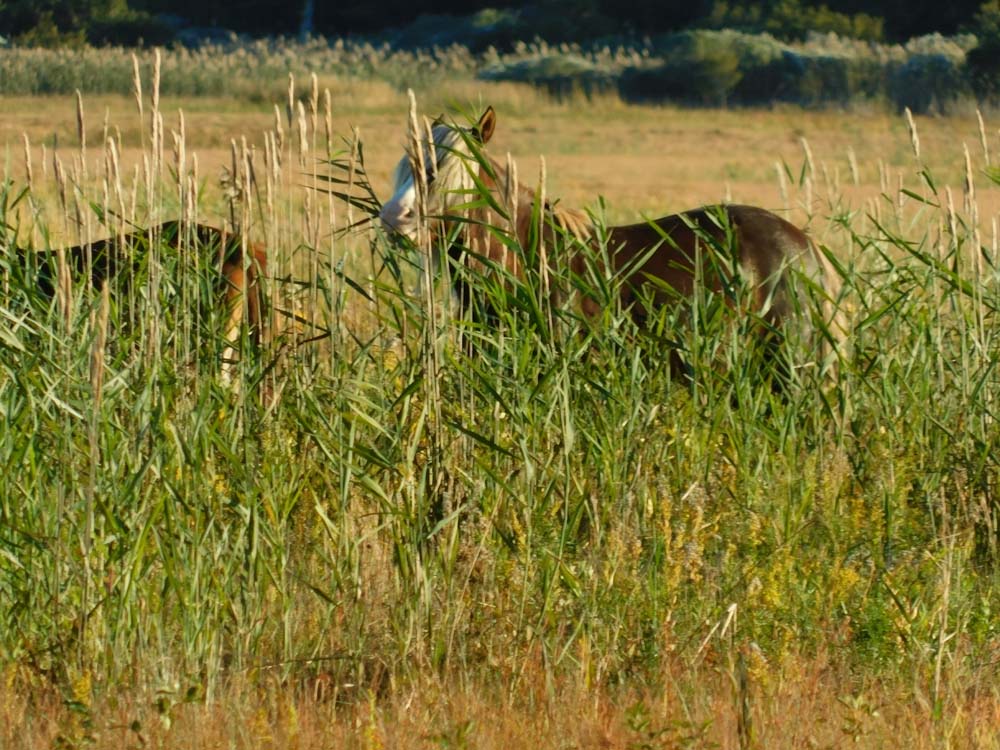 Surfer's Riptide and friends grazing incognito along the wildlife loop
...some friends and I decided to drive to the islands... 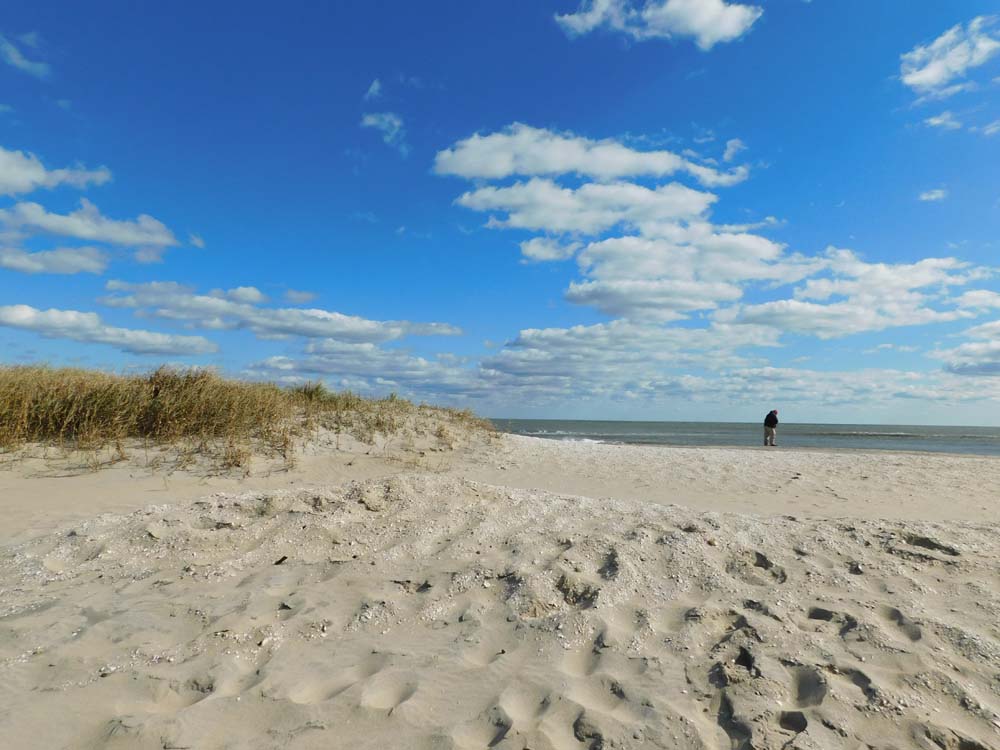 It's a bit of a stretch to drive five hours or so from southcentral Pennsylvania and back in one day. But with someone at the helm who drives for his job, a big butt kicking truck, and a minimum of gear... and a lot of Royal Farms... we got there before noon. We could stay till the sun went down over Tom's Cove and the Assateague Lighthouse came on, then be back by midnight.

A Brief Dissertation on Navigation:
A long time ago in a galaxy far far away... I used to get up before the butt crack of dawn... or leave right after the late shift at work... and drive down PA83, under the crissycrossy overpasses, like a gateway to adventure, around the umpteen lane racetrack of death that is 695 around Baltimore, over the Bay Bridge, which is the first glimpse of Big Water that looks like the sea... through Salisbury and Cambridge and across DelMarVa toward Ocean City... then veer south to the real beach at Chincoteague.

There is a shift in landscape as you cross DelMarVa, the PA wrinkles flatten out, the horizon stretches, the ground is sandy, marshes and tidal creeks appear. The barns are a different shape: tobacco barns and horse barns, not bank barns. As you approach the coast, loblolly pines line the roads. Then you make the turn at T's Corner (past the cheesy and utterly politically incorrect "Peace Token" tobacco shop), drive through a lane of tall loblollies... past NASA telescopes, and the bay opens up before you.
​

Across the water a sprinkling of houses, you roll down your windows and breathe in the unique scent of salt marsh, crossing the narrow causeway, over the tiny drawbridge and into town.

Now There is a vast winding new road over the causeway, a new bridge... but still the same gulls wheeling overhead and the same salt marsh smell.

Long ago I decided I do not drive at warp speed and hate, loathe and despise city driving, the BaltoWash Deathway, and will now navigate down 74, across the Conowingo Dam over the Susquehanna River, out to 213 that runs like a spine down DelMarVa, over the Bohemia and Sassafras rivers, maybe through Chestertown with a stop to say hi to Schooner Sultana and picnic at the waterfront. On across DelMarVa, through farms and over tidal creeks and marshes to the big marshes at the edge of the world, and Chincoteague.

It takes a bit longer, but is much more relaxed and scenic.

​This day though, we took the old route...
The night before it poured rain. This morning it was still cold and raining as I fed dogs and horses and stocked enough slow feed hay bags in the shelter to last them all day (they also have some pasture to walk around in and a full stock tank of water). I ...am...not...a... morning...person.

​We proceeded through Baltimore, then to the Bay Bridge...
Some years ago, friends and I did a day voyage on Schooner Sultana, which took us from one side of the bay to the other, and under the Bay Bridge. It's even more impressive from the water, viewed through the rigging of a tall ship.
Past NASA and the NASA visitor's center and the old roller rink to where the woods opens up and you can see across the water to Chincoteague. Then across the causeway to Assateague to check at the visitor's center for who's migrating through and other random info.
The road into Assateague leads you past the lighthouse. You can see it rising through the trees. You can walk up the hill and climb the spiral stair inside at times. You used to be able to climb up into the light room, with the two rotating beacons and 360 degrees of glass walls. Now that is off limits but you can walk on the catwalk around the outside, and climb as far as the watch room. We did not go in, but got some shots of folks on the catwalk, as well as fall color in the woods at the base of the hill.
Along the road to the beach, you'll often see wild ponies grazing off to the right in the marshy areas among "tree islands" (the ground is literally higher under the trees, islands amid the marsh and salt meadow hay). On both sides of the road are lagoons, where egrets and waterfowl often feed.
Great egrets, snowy egrets and cattle egrets are various sizes of the big white birds you'll see. Great blue herons, as well as the odd tri-color or little blue heron are seen too. Here, great egret fishing...
Looking for small treasures underfoot. I often find heart shaped objects.
On to the beach. Some may like to meditate in the woods or a desert... I find the shifting roar of the sea, the shapeshifting sandscape, the roll of waves, and the horizontal lines of this epic space between land and sea meditative.

This day was chilly, in the low 60s, was was the water. Our hardy Whovian surfer was certainly using a wetsuit. We walked in the swash in barefeet, chuckling at some college girls who'd come to the edge of the sea in street clothes and shoes... they got wet.

​With a sandstorm blowing below my knees, I popped the camera into a ziplock bag. Interesting trying to work out how to use the viewscreen and controls through the bag, I poked the lens out... except for a couple shots where the bag slipped. The big wind blew some nice spray off the waves.
Gulls are some of my favorite birds. A number of them were chillin by the beach parking lot. Black backed, herring, ringbilled and laughing gulls. The spreckly ones are birds in their first, second or third winter (they get ever more grey on the "mantle" or back area as they age). Juvenile birds often have dark eyes where adults have yellow. Leg colors vary, many of these were pink. Spreckly head can mean non breeding adult (winter plumage). The black backed gull is the largest gull in the world.
After 3pm you can drive around the wildlife loop (you can hike or bike it other times). Saw herons, egrets, ducks, and lots of birders with ginormous scopes watching them... including a group of kids who were well versed in nature in general and identifying birds in particular. Maybe our future is gonna be OK...

Farther on, I spotted a shape in the tall grasses that was not a random bit of dark vegetation, but a quadruped shape. It turned out to be Surfer's Riptide and his band. Legacy also hangs out in this area. There was a truck with some photographers with lenses the size of the Hubble. I don't have a lens that big, but it isn't too bad.

https://www.dscphotography.net/ has some of the best pics of Chincoteague ponies
We drove back out to the beach at dusk to catch the sun sinking over North America. The visitor's center there has a deck with telescopes to view the distant marsh and cove. We sat on Adirondack chairs and rockers and watched the sky and sea change. A distant duck blind turned out to have a bald eagle perched on it. At one program here, we counted over 17 species of birds visible from the deck.

I do not do selfies.

​Or rather, this is the extent of them...
The feet thing is because most people don't pay attention to what's under their feet, and trails, sand, surf and other textures underfoot are interesting.

I also mostly take pictures of natural world subjects (or plush mermaids) like birds and surf and wild ponies rather than people. So I don't have lots of the usual pics of "here's my friends and me on the beach".

When I travel with Dave and Terry Tristan, I often find myself in pictures (Dave went to film school and is in fact, a photojournalist).

So, here's a lot of pics of my friends and me on the beach.

Nah, we don't do that bikini nonsense... just a tardis hat and a 13th Doctor (Who) T-shirt...
Red shirts and "he's dead Jim" are Star Trek references... you know, the ORIGINAL one. Red shirts always got eaten by the slime monster.

Cliff stares happen a lot in BBC historical dramaaaas like Poldark; hero stands on cliff, looks epically off into distance...

Cliffs do not happen on Assateague, it is flat. Sometimes though the sand gets washed away and leaves an epic foot high cliff...

​Nearly winter? You still need to wear only flip flops or go barefoot... it's a beach.