In Lord of the Rings, he ran on top of the snow in light shoes while everyone else floundered through the blizzard. Here, he borrows that bunny sled from the Hobbit films and takes to the trails. Twelve inch action figure, small plushie rabbits, some hemp twine, and a thrift store sled basket with some modifications. I wrote an article on theonering.net on real mushing vs Radagast's Racing Rhosghobel Rabbits here: http://www.theonering.net/torwp/2013/01/03/67872-radagasts-racing-rhosgobel-rabbits-a-recreational-musher-looks-at-the-realities-of-bunny-sledding/

In the process of setting up a model horse display for the local library, I discovered I was missing a few in the rainbow of colors that is Horse. I had designed the display to do a bit of education on the fact that horses are not just brown or white (in fact those colors are rare) but a wild array of stuff that comes from two basic genes: black and red... and a gazillion modifiers.

I was actually missing Brown. Because Brown is debatable... maybe the thing they call Seal Brown is just Dark Dark Bay, or maybe it's a black horse with countershading (mealy or pangare... I didn't have any of those either). So far, the DNA evidence leans toward it's another thing that agouti does, the way agouti makes bay... only darker.

I needed some Brown, and some countershaded horses in chestnut and bay. In my hundreds of equine models I had none.

Then I discovered these lurking in the back of a dusty shelf. They are cheesy hard plastic copies of Breyer models, made sometime in the 1960s. (I had them as a kid). the Breyers they are based on are the Family Arabian Stallion and the Proud Arabian Mare. The Breyers are Traditional scale: 1:9. These are about 3/4 of a hand at the withers (about 3 inches)... making them about 1:20 scale. Or about the same scale as most of the Schleich and Safari models. They have a basically nice shape (thanks to Chris Hess who designed the Breyers, and the capability of the copy artist to copy) but crappy paint jobs. The grey in particular looks piggy eyed and lacks jaw definition. 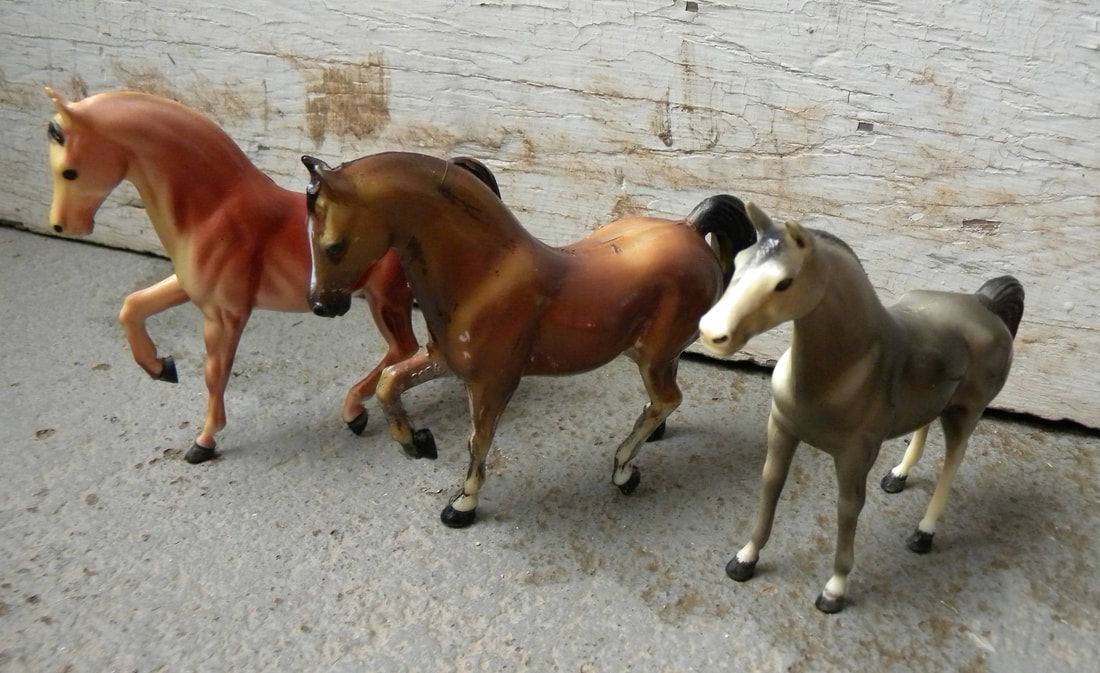 I repainted them with the acrylics I found in my toolbox: artists' paints (translucent, in tubes) and craft paints (opaque, in small bottles). The brands for the craft paint were Americana and Folk Art, two of the best. Rich juicy pigments, nice flow, good coverage. I brushed on most of the paint with a taklon pointy brush, then used a sponge (literally, a yellow "spongebob" cut in pieces) to dab on the shading. I painted the points (mane, tail legs) then the countershaded underparts first, then worked the body color into it. I brushed gloss ModPodge over it as a top coat. That evens out the various finishes of the paints. I think I would rather have used a satin ModPodge, (more realistic, less glare for photography) but what I had on the shelf was gloss. Shot in the kitchen under incandescent light (OK, it's LEDs, what's that count as???), with a towel background. The Nikon Coolpix L100 tends to focus on the background, not the subject, so I played games with a camera grey card: place right against subject, focus, pull card away.

then I went outside and played...

...now completely soggy from lying in snow,
​moves to side yard with better background...

Sometimes full sun doesn't work: it burns out highlights and creates black shadows. Maybe you need a fill flash or a piece of white paper to reflect light onto the subject. Sometimes you focus on the grey card and the whole photo washes out. Sometimes you forget to remove that giant honkin grass blade or leaf.

Keep your camera angle low, like eye level with the horse or lower (which involves yoga or sprawling ungracefully in melting snow or mud). A small tripod can be useful, or a sandbag... or ziplock filled with rice, to place the camera on. Be sure you're looking at your pic from the same angle the camera is: that way you avoid having trees growing out of your horse's head.

​Have fun. Even these small cheap models can be epic.