By the beginning of May 2021, the last episode of The Falcon and the Winter Soldier had aired on Disney+.

By May 1, I was done done done with The Plague and the rumpled hills of PA. This mermaid needed to go to the sea! Still a bit too cold to launch kayaks, a friend and I launched a foot expedition on the DelMarVa peninsula, visiting the Sassafras River and Eastern Neck Island National Wildlife Refuge.

I usually pack a few more props and characters than I use. Time, or the landscape itself, will determine who comes out to play. This day, it was Sam and Bucky's Excellent Adventure, with some wild ponies and Toothless the Night Fury. A weirdly low tide gave us some exposed beaches and sand flats... and a 10 pound mushroom anchor someone had lost years ago.

​Pics at top of page: cheesy cell phone camera, for Facebook. Below: Nikon Coolpix B500
By May 2021, w3e were all done done done with the Plague and needed to chill on a beach.

​We were at nearby Delaware Bay beaches for the horseshoe crab spawning and shorebird migration. We took a day to visit this Atlantic coast beach. At least one crab appeared for Asoka... (it's a Safari model). 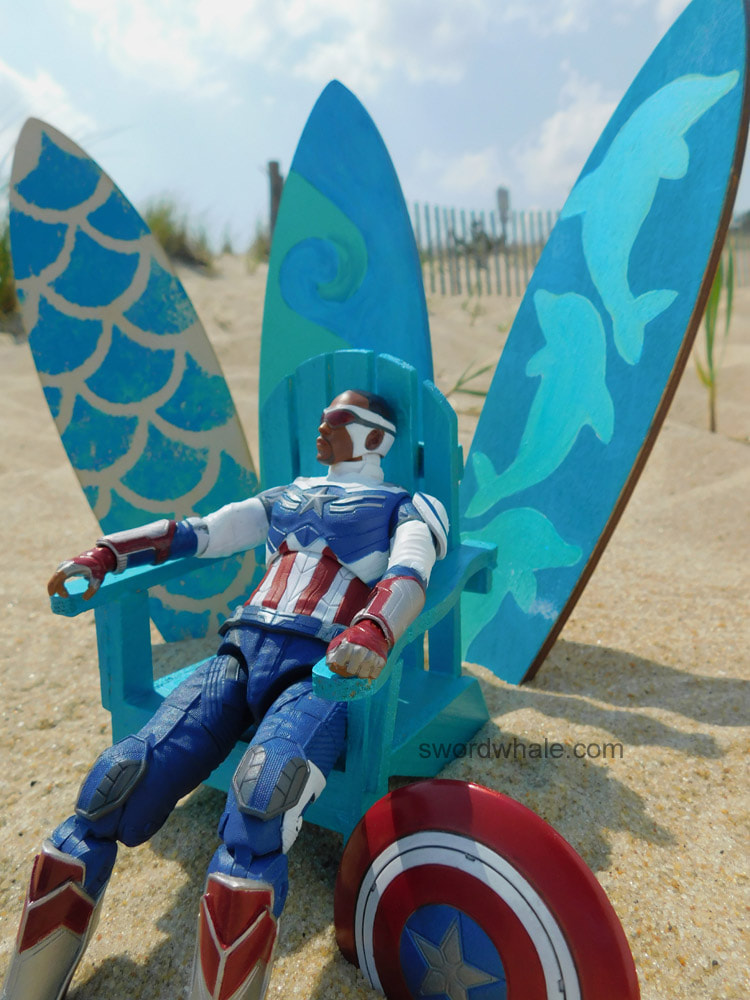 
The "Photo Your Toys" section on this website is where I fervently encourage everyone to go play with your toys. Outside. Preferably in a fun natural world environment. It's a great expedition for kids too: pick a few action figures, ponies, dolls, dragons, whatever, and take them along to the beach, on a hike, to a new place, a familiar place, whatever.

As adults, most people lose their imaginations, and imagination is what allowed the human race to thrive for millennia.

Taking a couple of 6" action figures into the wild makes you look at a familiar place from a literally different perspective: 6" off the ground. Like all the stories involving tiny faeries, shrinking humans, Borrowers, Ant-Man etc, a scale shift makes you see things a new way.

Early in May, 2021, a friend and I went to a couple familiar places...FINALLY... able to travel from the rumpled hills of PA to the wonderfully sandy and flat woods, fields, marshes and open water of Maryland, we visited, on foot (it's often kayaks later, in summer), two of my favorite places: The Sassafras River and Eastern Neck Island.

Having just binged Falcon and Winter Soldier on Disney+ (highly recommended!!!) Sam and Bucky came along...with a few other folks. I tend to travel with a bin of potential props and subjects for photos, cause, you never know what the landscape will inspire, or what you have time for. Useful gear includes: small sticks to hold up action figures, a spray bottle or cup to fling water at galloping ponies (practical effects), a place to sit (unless you want to put your butt on damp sand or in the water), a backpack to throw stuff in for a trail... or just to walk down to the beach... ziplock bags or small food bins to contain characters until needed. I also have a selectin of footwear from Muck Boots to river sandals to water shoes. Layers are good too, as is a weather report and tide charts.

We were surprised to find one of the lowest tides ever (according to locals) at both the Sass and E-Neck. It exposed some interesting sand flats as well as a ten pound mushroom anchor someone had lost off a boat years ago (according to the barnacles).

I take one real camera and one decent phone camera (to post instantly)(if there's cell coverage... cause Turner's Creek is iffy). I wrap characters in towels for the trip; they will come back wet and sandy and no point in the bouncing van sanding off half their paint job.

Go ahead, try it! I have no script, I just see what the landscape has to offer and let the characters react to it...

Sam and Bucky's Excellent Adventure takes place on two favorite kayaking sites: the Sassafras River and Eastern Neck Island National Wildlife Refuge, in Maryland, on the east shore of the Chesapeake Bay, the west shore of the DelMarVa Peninsula.

We stopped at the Sassafras River, Turner's Creek dock first. This area is used by recreational paddlers, boaters and fishermen as well as commercial watermen (think boats like Sam's family boat). It is known for its amazing fields of American lotus which bloom in mid-July to mid-August.

Farther south is Eastern Neck. A "neck" is a small peninsula, this one became an island when a creek/inlet cut it off from the rest of the neck. It has two launches: Bogle's Wharf on the east side/Chester River and Ingleside on the west side/Chesapeake Bay. The river side tends to be protected and easier for small boats and beginner paddlers. Ingleside launches you directly into the vastness of the Bay, which leads south to the sea. It is North America's largest estuary.

We had unusually low tides, giving us vast sand flats. This may have been due to the recent supermoon, and to high winds, which can push water farther out and down the bay. Rainfall does not affect this tidal water, other than to make it more salty or silty at times.

​My favorite islands of Assateague and Chincoteague lie on the outside, east side, ocean side of DelMarVa, south and east of E-Neck.