My cousin has a small water garden pond and two boys who like to climb rocks and fish and stuff.

Which is how I ended up raising tadpoles.

I also have a large "vernal pool" that appears in mud season (spring to all you folks without livestock) in the horse pasture. I do not have a large water source nearby, so my amphibians are limited to toads which are more terrestrial than frogs. They lay eggs in the puddle, which rapidly vanishes, then the birds go "hey, look at the banquet!"

Until I scooped out most of the tadpoles and stuck them in the lotus pot. 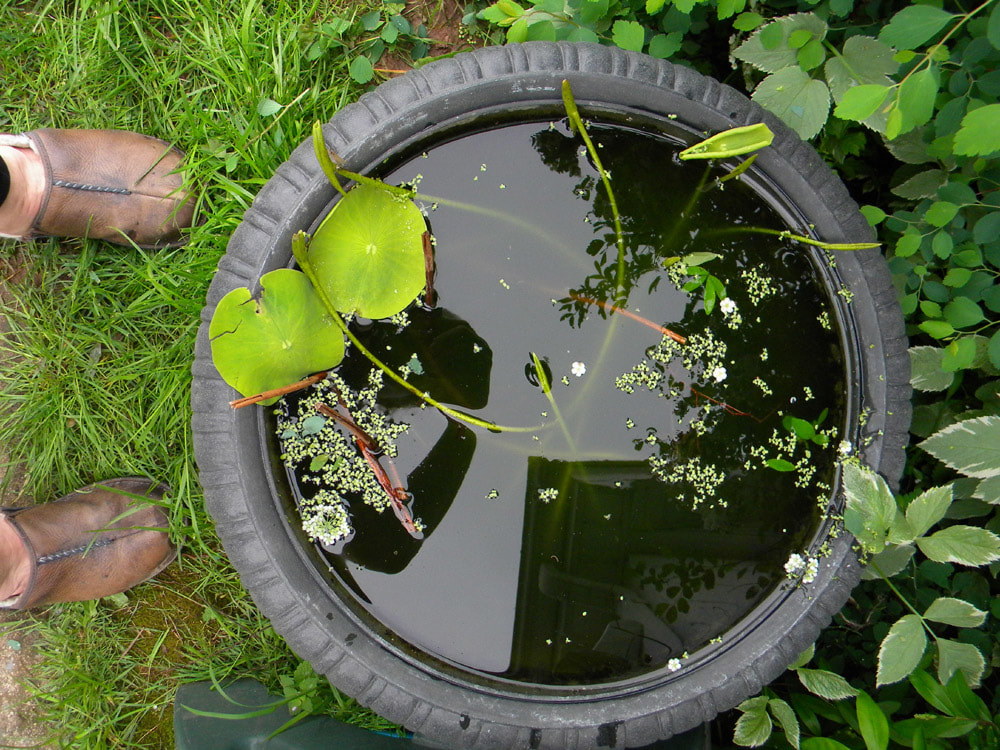 In addition to the shady lotus (and the pot is partly shaded by a bush, it reduces water temps and algae), there is SAV ("oxygenators" at the plant store, it looks like the weeds that come up on my paddle blade in shallow lakes), or Submerged Aquatic Vegetation, and some volunteer duckweed (the little floaty stuff on the surface) and algae (diminished by the shadyness). Tadpoles are largely vegetarian, and will eat the algae.

In several pools, snails appeared, along with teeny tiny bugs that swarm and are smaller than a pinhead. Mosquito larvae are longish, and I have dunks to destroy those. Perhaps the damselfly nymphs will eat the bugs.

I have arrowroot in pots, and some growing from over-wintered tubers that I just stuck in the sand at the bottom of the pools. Water hyacinth floats and provides cover for tadpoles (or fish), it does not over winter well, but is cheap to buy in spring, and grows fast. Duckweed and algae just show up as well as some tiny bugs. Mosquito dunks keep out the mosquito larvae without damaging anything else. Some of the pools are shaded to cut down on water temp and algae. I tossed some toad eggs into the lotus pot, the rubber tub, and one kiddie pool. Some kinds of plastic are toxic to fish, so kiddie pools may not work. Or will they? Be sure to have ramps, islands and ladders for not only the amphibians to crawl out (frogs are better leapers and swimmers than toads) but for the odd bird or small mammal that falls in.
other visitors and residents
Toad eggs...
tadpoles
Below: two different visitors to the garden...