I grew up on horseback (obvious from the rest of this site). I have noticed over the years, many fine illustrators (especially in the fantasy, comic, gaming, and middle reader genres) who didn't grow up on horseback; illustrators who can draw an entire spaceport, create convincing characters, excellent architecture...

...and clearly have never seen a live horse in their entire existence.

If you are a beginner, anything you put on paper is practice! Put lots of stuff on paper, you'll only get better. And do your research. Here's how to horse...

If you are an experienced artist, but don't know much about horses, here's how to horse...

Gooberland
​
(and how to avoid it)

That said, if you are an amateur and doing this to learn or for fun... still do your research... but anything you put on the page is practice. You get better with practice. 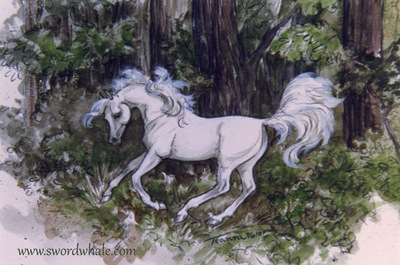 Horse colors (it's weirder than you think)
http://www.pinterest.com/swordwhale/drawing-horses-102-colors/

Pintos and Paints (and why they are sometimes two entirely different beasts, and sometimes the same)
http://www.pinterest.com/swordwhale/drawing-horses-104-pintos/

Horrible failures that people actually got paid for (the agony, the horror)
http://www.pinterest.com/swordwhale/drawing-horses-epic-fail/

Really awesome carousel horses, rocking horses and other classics (how to do horse art right)
http://www.pinterest.com/swordwhale/carousel-horses-and-classic-rockers/

Your first job is to google George Stubbs. He spent a lot of time in the 1700s dissecting horses to understand their anatomy. He was the finest horse artist of his time... and pretty much any other time.

It makes me nutz when someone draws a donkey or zebra with cloven hooves! No, they are equids!

Equines are: horse, donkey and zebra.
Ass, donkey and burro are the same critter.
A mule is NOT a donkey!  A mule is a cross between a male donkey and a female horse (they look more or less like a large donkey...with a fuller tail, and some other slightly horsey characteristics).
A hinny is a cross between a female donkey and a male horse (they look more horselike, but slightly odd).
A zonkey is a cross between a donkey and a zebra (they look like donkeys wearing striped stockings).
A zorse is a cross between a zebra and a horse. (They look like very horselike, in regular horse colors, overlaid with stripes, they actually strongly resemble primitive breeds like the Fjord, or Przewalski). Also called zebra mules.
The crosses are usually sterile.
A Przewalski horse is a rare, primitive, wild horse (looks like a cave painting). Scientists yet debate where it fits on the taxonomic tree; whether it is a separate species of equine (recent studies suggest it diverged from modern horses 160,000 years ago). It has 66 chromasomes, while the domestic horse has 64.Today's Przewalskis have some modern domestic DNA; crossed into the remaining Przwalskis to bring them back from the brink of extinction.
A Tarpan is an extinct European wild horse. 20th century efforts to recreate it have produced the modern Tarpan.
A quagga is an extinct subspecies of plains zebra (there are scientists trying to breed back to recreate them).
Kiang, Onager, and African Wild Ass are wild (never domesticated) donkeys.
The kunga is perhaps the first human bred hybrid, seen in Egyptian art, pre-dating horses, pulling chariots and such, it is a cross between the domestic donkey and a now extinct wild ass (other species of wild ass are still around). Domestic donkey and wild ass have different numbers of chromosomes, so the offspring are sterile.
A mustang is a feral horse (a wild horse with domestic ancestors). Types and bloodlines vary, but the original mustangs were brought to the Americas by the Spanish; the Spanish Colonial Horse. remnants can be found in the Americas in some western herds as well as barrier island herds on the east coast, in South Carolina's Marsh Tackys, and Florida's Cracker Horses. 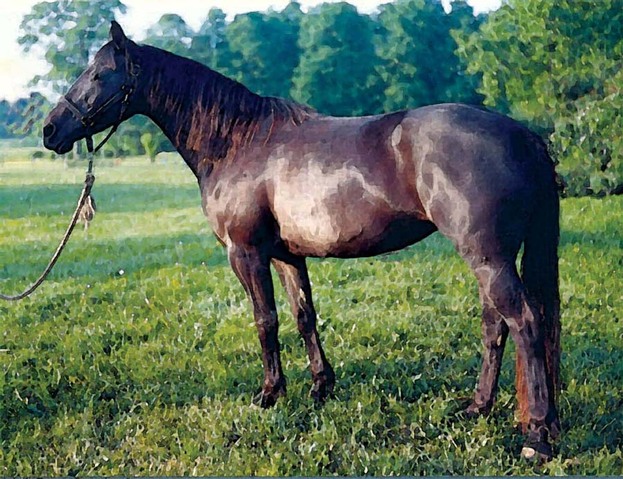 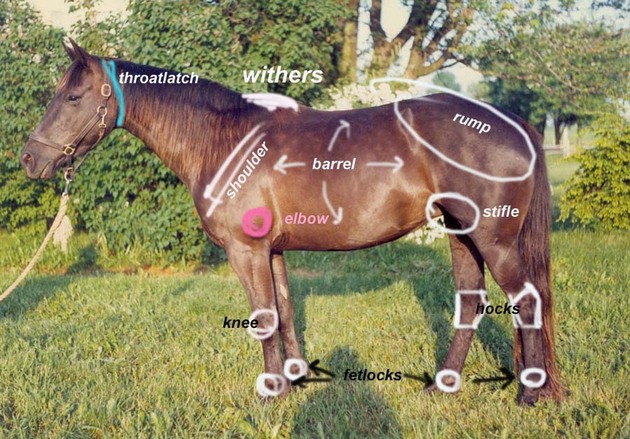 Horses have long legs to run from danger. Most of the muscles to power them are in the shoulders and haunches. The upper leg (forearm and gaskin) are fairly muscular (especially on heavily muscled horses like draft horses and quarter horses). The lower leg is mostly bone, skin and tendons; long and straight. Kids and cartoonists (I have a nifty Hairy Trotter T-shirt which exhibits this) often muck up the rear legs. Here's how they bend in the pics above...Left:front pic, rear:right pic.

It's actually the same joint design as your dog or cat... only the knees and hocks are lower in cats and dogs, and everything from the horse's fetlock down is a paw in predators. The horse is essentially standing on one long toe, fetlock to hoof is one big toe.

The biggest mistake artists make is putting the eyes on the FRONT of the head. Horses are prey items, their eyes are on the SIDES of their heads so they can see the wolfpack coming. They see all around themselves, even behind (except the part blocked by their own butts). Colors are: usually brown, but can be pale blue, greenish, hazel. A blue eye is usually near a white marking on the  face... usually, I saw a Chincoteague pony who was a solid bay, with two blue eyes. Hazel, golden or greenish eyes are usually on a horse that is a dilute color (cremello, perlino, champagne). One does not usually see the whites of the eyes; unless the horse is afraid... or an Appaloosa or pinto. The shape changes as they close or open their eyes.

Click on Svaha, below, or Saraf, right, to find more about horse gear. 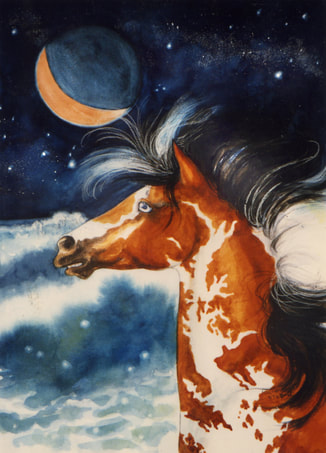 click on the Chesapeake Bay above for the basics of horse color... 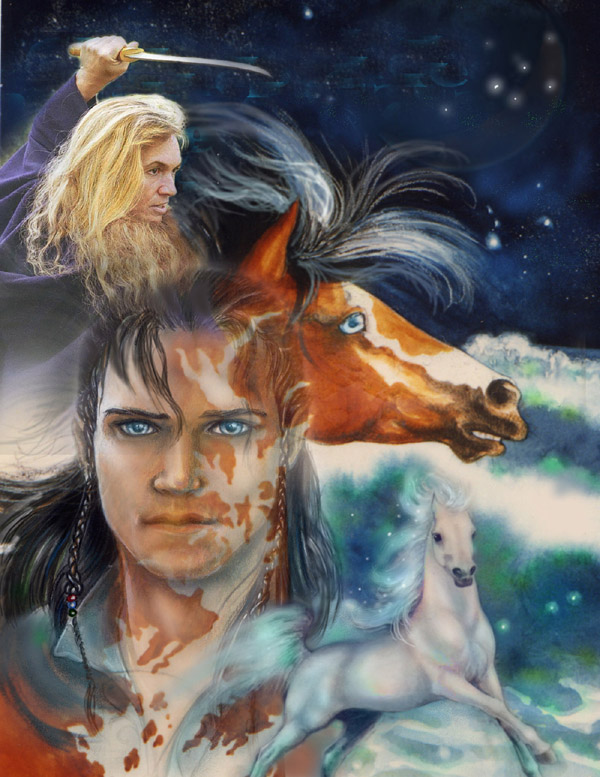 click here for more: go ahead, draw a horse 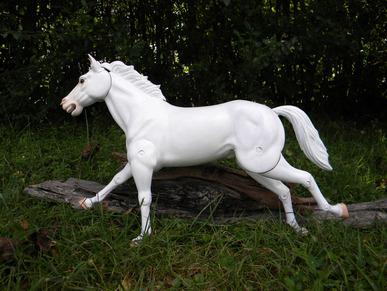 Sometimes it helps to have a model... a real model made of plastic. It is three dimensional, you can look at it from various angles (perhaps the photo reference you have is not the right angle), and some are poseable (like this vintage Gabriel Toys Lone Ranger's Silver from 1973). Beware, you are using someone else's art as reference, and you are copying their mistakes (while I love this Silver, he has some anatomy issues: his head is rather clunky, he has a ewe neck and sickle hocks, but overall, he is fun if posed well). Click on the pic for more...