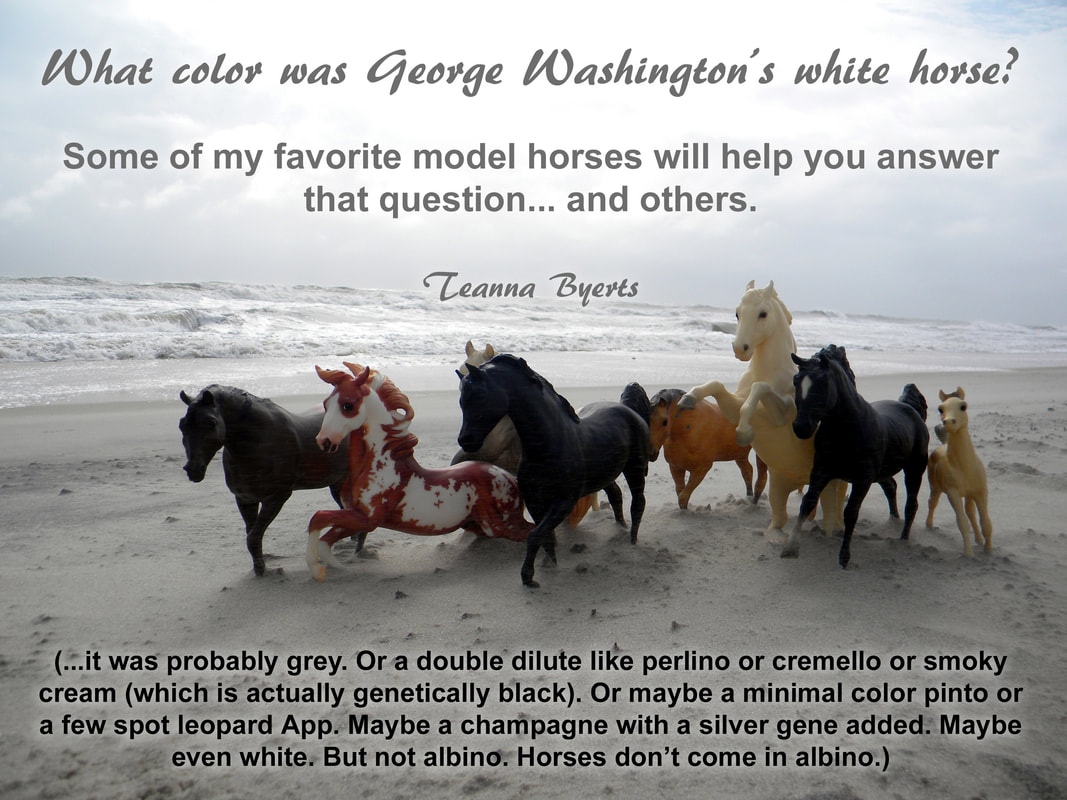 The local library has a display case in the lobby with a sign declaring: do you have a collection?

I've collected model horses since I was about four. I have some of the earliest Breyer horses. I have every color, size, scale, breed etc etc etc.

Well, almost (I lacked any champagnes, silvers, or countershaded colors. I also had no Fjords or Przewalskis.)

Instead of just setting up some pretty horses, I lined them up with an eye to educating non horsemen about horse color... and the genetics behind it. I created small "tent cards" explaining groups or individual horses. I typed short blurbs on a word processing program, on a page with two columns, then made sure there was space above each paragraph (to make the backside of the tent).
In order, from left to right (as in reading a book) top to bottom: 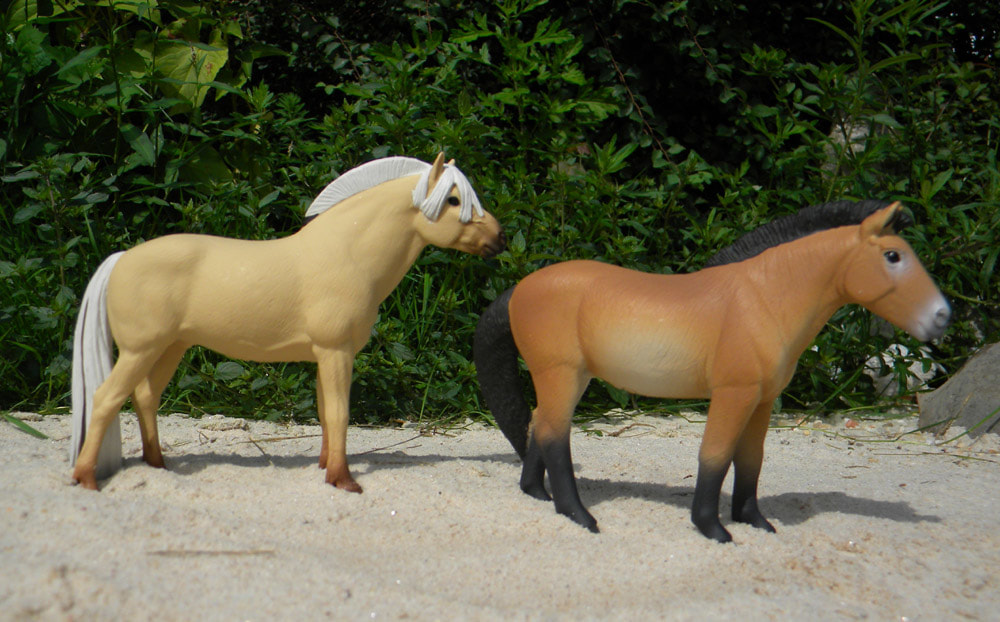 a Fjord and Przewalski by Safari

I started with the two basic colors that are the basis of all horse colors: red and black. Then agouti, which shoves the black to the edges and creates bay. then the cream gene which modifies bay, black and chestnut (red) into buckskin, palomino, smoky black, perlino, cremello, and smoky cream. The buckskin Breyer "Indian Pony" wears a string of beads a Dakota friend gave me long ago.

​Other groupings showed other modifiers: dun and grey, pinto and leopard complex (the Appaloosa breed in America, though other breeds have the color pattern). I had already re-painted a few of the greys: the dark maned dappled one, and the smaller very dark grey.  The rearing Appy (a smaller version of the large rearing cremello) I had painted years ago. I added a circle of horse/zebra/donkey with the hybrids in between (zorse, zeedonks, mules and hinnies). I threw in some bits about draft horses and ponies and foals, champagnes and countershaded colors, flaxen and silver (silver lightens black, flaxen lightens chestnut)(the famous Chincoteague stallion Surfer Dude might be either one).

There are some riders: a Lord of the Rings action figure, Legolas, fits nicely on a grulla traditional scale Breyer, riding, as he did in the book, without saddle or rein. Opposite him on the shelf is the real life realization of this skill, a grey mustang mare named Hwin (named after a horse in a Narnia book... CS Lewis, who wrote Narnia, was great friends with Tolkien who wrote Lord of the Rings). Hwin was trained by Elisa Wallace for a Mustang Makeover, and her freestyle exhibition was done without saddle or rein. Legolas's horse lost his original tail years ago, I replaced it with hair from the mane of one of my horses.

I also added other riders: there are some riders that come with Breyer's Stablemates, others that come with Schleich's models, and a centaur I made using a Safari horse and a Narnia action figure (the horse body was awful, so I gave him a better one). There's a unicorn, a pegasus, Iron Man is petting a Clydesdale, Thor is handling a champagne pony, Captain America is showing proper handling of a shield on a horse. Even Moana is hanging out with a tiny mini. Hopefully it becomes a sort of treasure hunt as kids look and notice more stuff.

I backed the display with photos I took of my models in nature, and placed random colorful scarves on the shelves. The shelves had a slight tilt forward, and some horses tended to fall. Placing a bit of folded paper under the low hooves (under the scarf) leveled the horse.

I knew about silver dapple (the silver gene working on black), but I had only just learned there was a color called silver bay. There the silver gene also works on black: the black points of a bay. You get a red horse with a silver mane and tail and some silvering on the black legs. I had no models that color, so I took a nice Paddock Pal Breyer (the only one I have in that scale) who was chestnut and painted him silver bay.

I had no champagnes, although I had lived with a champagne pony in my teens. Back then we had no idea what color "Sandy" was. I identified it later when I realized she had hazel eyes and freckled pale skin, the marks of a champagne along with the diluted "pale dun" looking color. I found a couple Stablemates who were "paint your own" horses I had never painted. A moment on Mr Google to get the color accurate and I had classic and amber champagnes. A slight change to a palomino made a gold champagne.

I had no countershaded horses: no mealy flaxen or pangare bay or seal brown. I rediscovered three dusty ponies on another shelf, not Breyers, but cheesy plastic copies of traditional scale Breyers. I repainted with acrylic artists' and craft paints and had three fabulous horses. http://www.swordwhale.com/paint-and-wet-snow-pants.html

The Misty and Stormy models were acquired on Chincoteague Island VA, Misty, the last year she was alive, 1972. I included the books Misty and Stormy, with their original Wesley Dennis covers. Now Wesley Dennis is the god of horse art... but Breyer, when it did the Misty model, misinterpreted Dennis's fine art and painted Misty all wrong. The right side of her face shows on the Misty cover: apparently white with a chestnut spot around her eye. Which is how the model was done. I was so incensed at Breyer that I repainted my Misty to the correct pattern (I saw her personally, though I did not get a photo, she was snoozing and I did not want to wake her up). There are plenty of photos of the real Misty online and in books, as well as her taxidermied remains at the museum on Chincoteague. Misty on the Stormy cover is in her proper adult coloring: dark palomino pinto with a crooked blaze. The Misty cover is accurate too: it shows her in her foal coat, a creamy misty pale fuzzy coat with the adult color just beginning to show in around her eyes. When Marguerite Henry received Misty, she was sure Grandpa Beebe had sent the wrong pony, the pale fuzzy was nothing like the palomino pinto Marguerite had chosen. But that was Misty's winter baby coat. when she shed out in spring, she was glorious gold and white. Palominos often get paler in the winter. Breyer had never corrected the model's wrong pattern.

Surfer Dude is the most famous Chincoteague Pony after Misty and Stormy. Unlike Misty, he actually ran wild on the island for years, siring many foals in his signature dark chocolate color with blond points. There is still uncertainty, depending who you ask, as to whether he is a silver (silver is common in ponies, and lightens body color to mouse grey or pewter or chocolate, and points to blond or silver or white)... or a dark flaxen chestnut (flaxen lightens chestnut points to blond). I repainted a "Welsh Pony" Safari model I found on Chincoteague to look like him.

Conga conga: There are several models which I have more than one of. There's a thing with collectors, sometimes you pose all of that same model in different colors together in a dancing conga line... it's called... a conga. I did one conga here, though if you look, you will find several models that have twins in other colors.

Brindle is rare in horses, and usually happens because the horse is a chimera; an individual with two DNA types. Basically should have been twins but wasn't. Dunbar's Gold and Stetson's Mr. Blue are two stallions who exhibit different types of chimerism. Dunbar is a brindle, and a documented chimera. Blue is a "calico", both red and black in both body and mane and tail along with the white markings of his Paint DNA, although there is debate about whether he actually IS chimera. I painted a fairly boring chestnut horse brindle long ago.

For the hybrids I painted a donkey foal with the leg stripes of a zeedonk (they look like Pippi Longstocking donkeys)...and a couple of Schleich horses with zebra hybrid stripes. Both were leopard complex models (an Appy and a Knabstrupper). I'd always wondered what it would look like if you crossed an App with a zebra; you can google a few. But beware, at least one of them is my Photoshopped idea of what one should be.

and finally got these...

The Fjord (by Safari) below is "brunblakk" or brown dun. The Przewalski horse is a wild variety of dun. 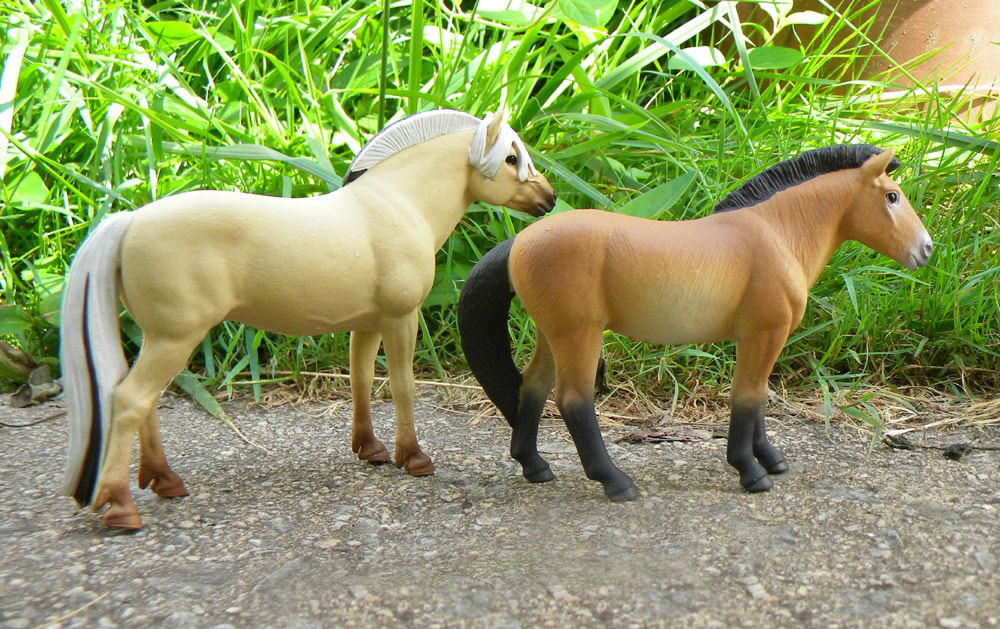