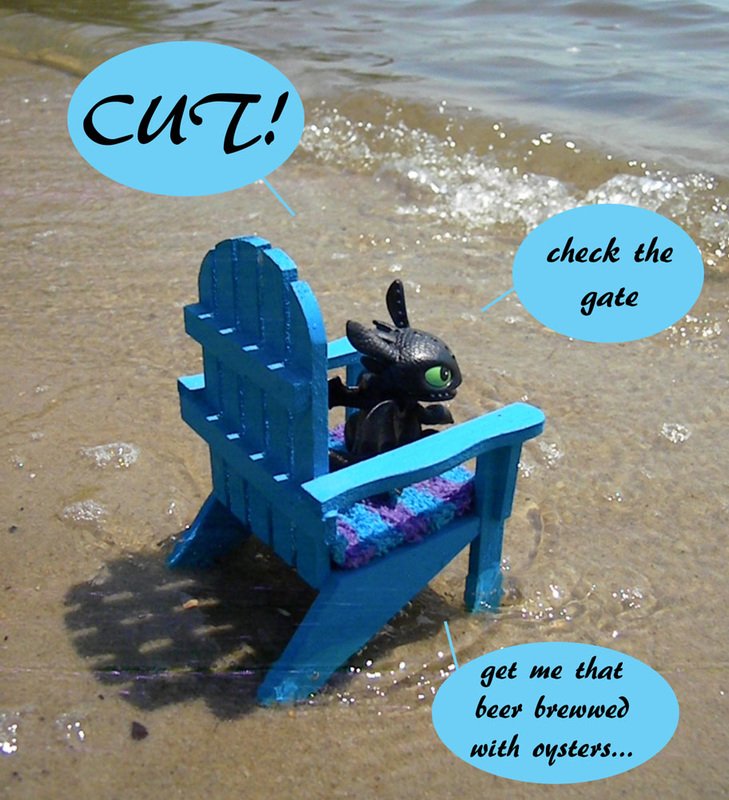 Why let your action figures sit on a shelf when they could be helping you burn camera battery...


The mermaid was liberated (for $20) from the gift shop in the National Aquarium in Baltimore. I have no idea why I needed a mermaid, except she has my auburny red hair. And is wearing that turqua color I've been collecting.


The beach chair and craft paint are items you can easily find at your local AC More or other arts and crafts store. Folk Art, Americana and Apple Barrel have been road tested by some of us... My Studio/Nicole is watery and nice for kids to play with.


Toothless the Night Fury dragon, you'll recognize from two How to Train Your Dragon films by Dreamworks. If you don't recognize him WHAT ARE YOU WAITING FOR, GO WATCH THE MOST AWESOME ANIMATED FILMS EVER ALREADY!!!


The horses are refugees from thrift shops, given to me by a friend... they had seen a lot of play and were quite worn. The white one (now blue) had a marker tattoo in the style of My Little Mystery Beast (certainly NOT ponies!!!). Rehabbed with Rustoleum 2x spray paint, and human hair conditioner for the manes.


They turned out to be Our Generation model horses (to the scale of American Girl dolls and much nicer than the AG horses).


I googled sea names and found a shipload. Meredith is Celtic for Protector of the Sea. Meri is "sea" in Finnish (not even the same language tree as Celtic, English, or any other Indo/European language except Hungarian). Genevieve is German for "white wave". Kai is Hawaiian for "the sea". A black centaur in my tales was named Kai ages ago... and he comes from an island, and most of the tale is set on islands and coasts... I swear I did not know.


Eastern Neck island sits at the end of the Chester River, north of the Chesapeake Bay Bridge. It is a National Wildlife Sanctuary. You can hike it, bike it, kayak it, or drive up in your car and watch the sunset. Nearby is Rock Hall with its tiny little sandy beach looking out over the bay (the sunset pics). Both are free free free.


Gravity happens: I was just planning to take random pics of toys on the beach.


I happen to have Sport Continuous Mode (which is how I generated 800+ pics that day) which is great for capturing mermaids falling on their heads in the surf.


Sticky dots, otherwise known as Glue Dots are sold in the scrapbooking section at craft stores. They might hold mermaids on horses. Also fence wire used like those poles that helped animate the Muppets.


A friend, Dave Tristan, works in TV land, wielding a camera and knows the Mysteries of Green Screen.


I need a better green screen.


Basically, when you realize you don't have any pics of the black horse, you set him and the mermaid up in front of a green screen (literally, a swath of solid green cloth or painted board or something) and take pics. Then you go to Photoshop and put the horse and mermaid into other old pics from the beaches by selecting color (green), inverting (so you have selected horse and mermaid) and sliding horse and mermaid into new background. Add some painting with the airbrush tools and voile, new pics.

There is a beer brewed with oysters, I had it for my birthday, in Baltimore. It's called Pearl Necklace.  http://flyingdogbrewery.com/?beers=pearl-necklace