It started with blank block walls. The party room at the roller rink definitely needed a makeover; it had all the ambience of Alcatraz.

Ideas were tossed about (Disney and Pixar do the same sort of brainstorming when they hatch a new film). Landscapes from various parks, an ocean, cute cartoon animals.

I calculated how long I'd spent doing the Nixon Park murals and figured I could finish the Party Room in about 2045...

As I write this page, a Smithsonian article on Mark Twain sits on the counter...
Tom Sawyer had the best idea of all: get people to pay you for painting your fence... or wall. We shanghai...er... sign up enthusiastic artists who want to learn more about painting large. They learn, we get a great looking room. And they have the additional coolness factor of having their art on public display.

Now, what to paint on those blank block walls:
"Dry aquariums" and landscapes are fairly easy to do, even for less practiced artists. Fish come in a variety of shapes, sizes and colors. A grade school teacher once gave us an assignment to draw and color a fish. "No matter what you do, it probably exists, somewhere." Fish are also simple shapes, and since we don't live with them and see them daily, (unlike humans), we will accept imperfect "fantasy"fish in art more quickly than people who don't look quite real. Landscapes can be achieved with impressionistic (rather than photorealistic) effects; trees are lines of grey and brown, foliage is blopped on with a sponge or splotched on with a house painting brush.

Cartoons are much harder. Disney artists (and artists from any of the other great film studios) spent hours studying real lions before they did Lion King. They drew sketchbooks full of deer before designing Bambi. They struggled into wetsuits and learned to breathe compressed air, staring at fish in their native habitat, before Finding Nemo. To translate reality, to distill it into a cartoon, takes practice; it's much harder to do it well than to simply draw the real thing. Amateur artists also tend to copy the Masters; if we did cartoons on the wall, we'd have a million copyright infringements as everyone drew Scooby-Doo and Nemo. Also, unless you are Disney or Pixar or Dreamworks or Hiyao Miyasaki, your cartoon will look dated and defunct next week.

Enter Touch Room: World. I've seen the impact an encounter with live (non-releasable) wildlife has on kids. The next best thing (besides a great film on the big screen) is lifesized art. Some lifesized arctic animals, painted in house paints on refrigerator cardboard, brought "Arctic Edge Adventure" to life for a friend's bible school. Nixon Park uses taxidermy, murals (depicting other animals and habitat) and the Touch Room wall to create contact between kids and the natural world. We decided to go with a parade of playful, but realistic animals.

When the students showed up, they turned out to have a wide variety of talent and experience, much more talent than I expected! To start with, we had only the vague idea of "parade of playful animals". A brainfarting session to rival Pixar's ensued, suggestions flew, interacted, and the four walls (with their interruptions of doors, windows, pipes, airconditioners and outlets) began to take shape. Things often shapeshifted and changed as we went along, evolving and growing to mesh with other ideas and artworks. It seemed to take shape faster, and more creatively, by having many artists (with different viewpoints and sets of experience) come up with ideas, bounce off each other, like a world taking shape.

The rest of the shots on this page show our artists at work.

Here's how it happened, and how you can adapt it to your own walls.
To avoid overloading this page, the four pictures directly below will take you to other pages,
showing you the process. 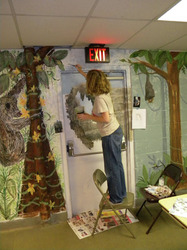 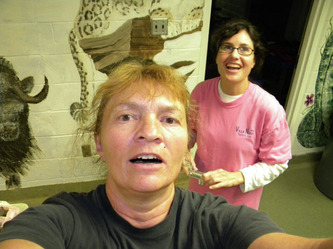 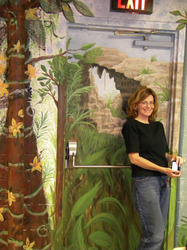 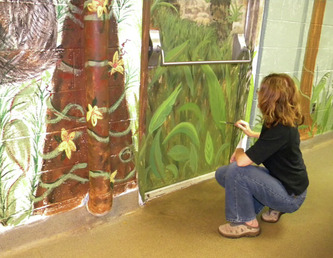 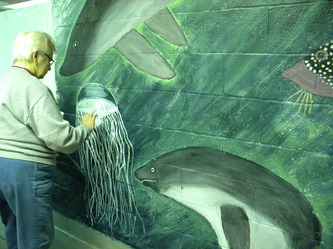 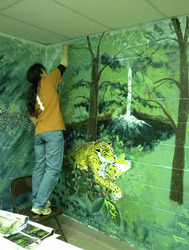 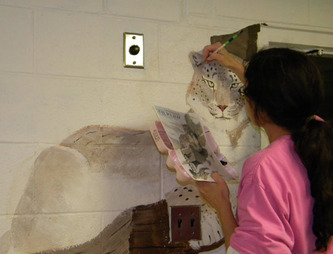 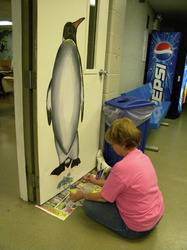 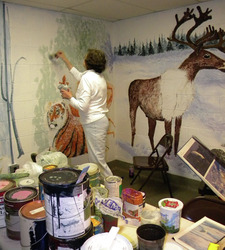 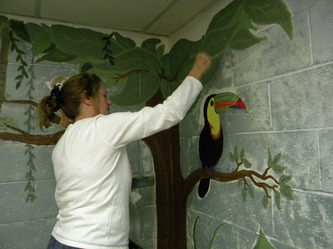 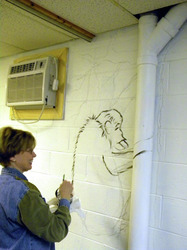 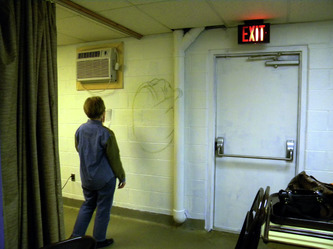 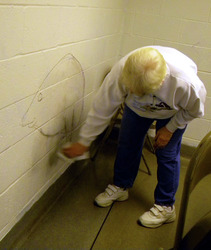 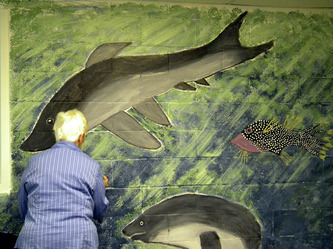 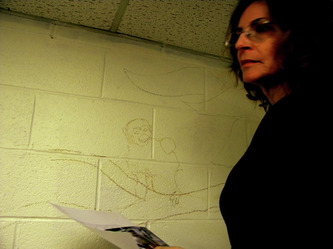 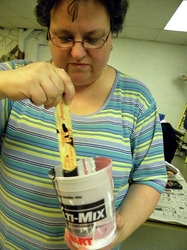 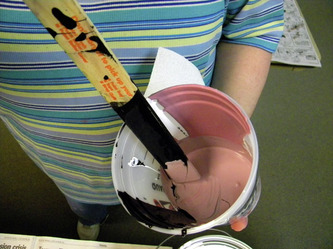 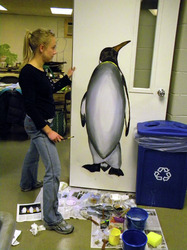 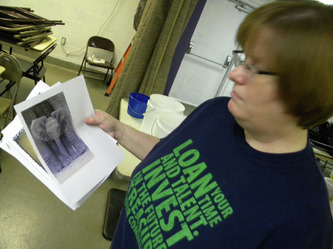 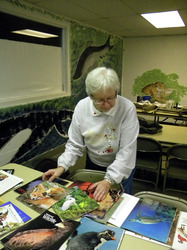 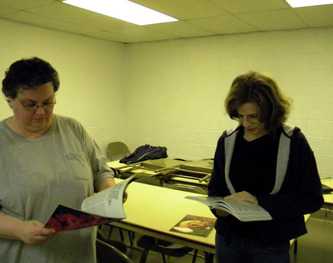 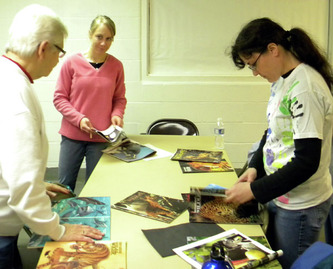 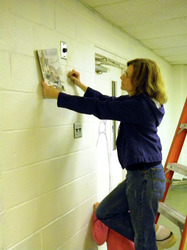 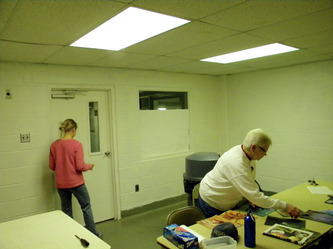