one week in August

I am a summer lovin Leo who hated the appearance of certain foxtailed grasses in mid-August, because it spelled the horror of back to school and the end of summer. (ask me about being a bright nerd in a clueless school system).

This year I was determined to have a vacation from stuff breaking, (everything...broke...) including the van that broke on the way home from the last Assateague trip. So, armed with a trip check (van checked by my favorite mechanics) and a campsite with friends at Pocomoke State Park/Shad Landing (to camp on Assateague you have to sign up at least 6 months ahead) I set out.

But not before the van produced an acrid burning smell on the day before I had to leave. In a panic, I called my cousin whose hubby is basically MacGuyver. He discovered a dangly plastic bit that was easily stuck in place... but no obvious meltdown. Except the defroster fan didn't work, which meant no air conditioning either.

On the last day I was on Chincoteague, the battery light came on. I was headed for a tour at the Beebe Ranch. I had driven early to make sure I could find it. I saw the light, pulled over and texted Friends Who Knew Stuff. Basically, OMG, your alternator is not alternating and your battery is not long for this world. I turned the engine off, turned it back on, and the light went off. I went on my tour. Went to the beach. Went back to my camp. Packed it up. Drove home by way of Rock Hall. Mermaided for a few hours. Had some nice ice cream at Get The Scoop. Drove home. Called the garage.

A relay had literally melted down, was replaced, along with the fickle alternator. At least it waited till I got home... and I do have AAA.

Meanwhile, I had burned through more than 16GB of camera card getting Chincoteague and Pocomoke memories.

​My friends presented me with a 64GB card...

a stop along the Sassafras

The Sassafras River is the second one you cross driving down the DelMarVa peninsula (the first is the Bohemia). It is a good paddle anytime, full of sandy beaches and wildlife and tidal creeks. But between mid-July to mid-August, the American lotus bloo. The giant lilypads are everywhere, on the water's surface, and waving above it like that element of the tai chi form I learned, "wave hands like lotus leaves". Paddling a kayak among them is grand. I did not launch the boat this day, I was trying to get to Pocomoke to establish my camp, but I needed a stop on the lengthy drive. I walked along the shore and got some pics of lotus and damselflies emerging.

Damselflies are constant companions on a paddle. I have pulled a boat out to find numerous nymph cases plastered along the sides of the boat, as well as newly emerged damsels perched on it. Damsels, and dragonflies, lay eggs on plants over water, the eggs hatch into fierce "bug mermaids" who hunt underwater, shedding their exoskeleton to grow. Then one final shed, and they emerge on a plant stem, unfold their wings and fly off to be aerial hunters.

Camping on Assateague was full for about 6 months. So the nice lady at the MD state parks suggested Pocomoke River State Park Shad Landing. A big shady woods, no bears (on the entire DelMarVa peninsula) but a hook to hang your garbage up out of reach... nope, the raccoons still found it... and a nifty river and creek to paddle on.

I am used to paddling open water that reflects sky and is rather wrinkly. Coming out of a side creek, I turned the corner and the bottom fell out... there was no river under me... only trees, upside down and bits of sky. I had a moment of sheer vertigo until I realized the mirror smooth reflection was causing it...

The river is a nice paddle. Cypress trees and spatterdock can be seen along the edges along with various wildlife.

​Either end of Assateague is less than half an hour away.

and suddenly a wild thing appears 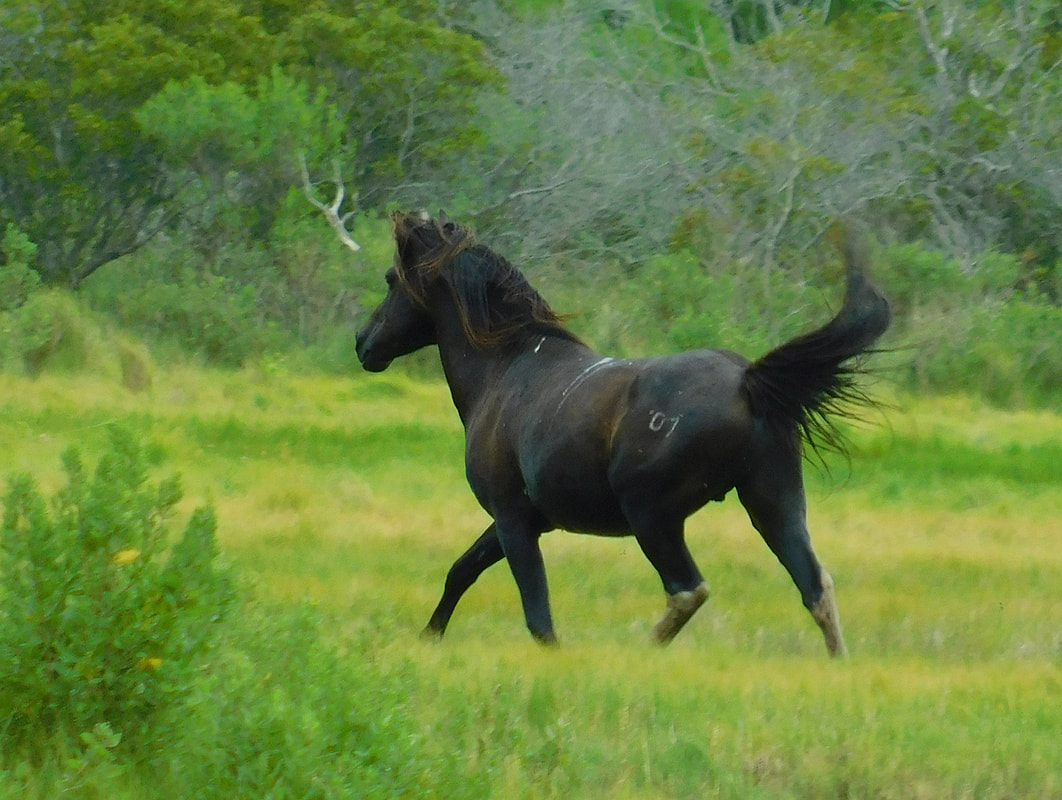 Most pictures of wild ponies on Assateague, or wild horses anywhere, are of horses doing what horses do most, grazing and swishing flies. I take a couple gazillion shots anyway, and use field guides, I Love Chincoteague Ponies facebook, https://www.facebook.com/groups/5285284449/,  the apps, and DSC Photography's website https://www.dscphotography.net/  to identify them. Like with birding, you have a deeper experience if you know something about the critter you're seeing.

I've had backyard horses all my life, and a few have been mustangs who spent time living wild. There is something special about horses living wild, in natural bands, interacting in a natural way, that makes trekking into the backcountry by foot or boat, or following them online, or buying a lotta field guides, worthwhile.

This year I signed up for Captain Dan's Around the Island Tours. http://www.captaindanstours.com/  There are several locals who will take you out on boats into the backcountry that needs a boat with an engine to get there. Captain Dan has a sense of humor (who else would have the Gilligan's Island theme song on their answering machine), a knowledge of wildlife, ponies and local history. The pontoon boat is stable, steady and can get up in the shallows where bigger boats fear to tread.

We saw all kinds of birds, the lighthouse, various bits of history, houses that had been built on land that are now in the water...

...the ponies waited till the last minute to make an appearance, and then, what an appearance! Ace and his band were hangin out... when a few others including some 2017s and Rainbow Warrior's boy band appeared. Ace is the black stallion with the white hind legs. Marshmallow and Tidewater Treasure are not white, there is no white, Marshamallow is a very light palomino pinto, Treasure is a sandy buckskin pinto.

Ace is a favorite because of this: (click on the type)

this way to egress

As you drive to the beach, off to the right is a marsh where "the southern herd" often grazes. This is several bands which can be identified on DSC's site as well as in field guides and the apps. Here Kachina and Angel and their 2019 colts (boys, fillies are girls) interact with the ever charming cattle egrets who wander at their feet, or even ride the ponies, looking for goodies stirred up by their feet.

"This way to egress" is a thing from Barnum and Bailey... http://www.ptbarnum.org/egress.html

These are quite literally sea horses, so water is a big part of their environment...

On the way to the beach you can pull over and observe various wildlife in the marshes, lagoons, and treeish areas along the road. To the right, the southern herd hangs out in various bands.

At the Refuge Inn, by the McDonald's is a small herd of the Donald Leonard Chincoteague ponies, as well as a few wild foals bought at the auction.

I noticed the one white foal and remembered the odd white horse in every early roundup I'd been to.

"White" is almost non-existent, albino does not exist in horses. There is something called "dominant white" which appears rarely... most "white" horses are grey (a normal color that whitens over time just like humans). In this herd, we have a medicine hat (or sort of partial medicine hat) pinto who is mostly white with a bit of color on her head, a pale buckskin pinto and the "white" foal.

To get buckskin you throw a cream gene at bay (Martha is standing next to a bay mare in one photo here). Throw it at chestnut (Esther Jane) and you get palomino. Throw it at black and you get... black...ish.

Two cream genes turn that black/smoky black into a smoky cream, which is basically white. Two cream genes turn the chestnut/palomino series into a cremello, and the bay/buckskin series into perlino. Honeymoon is listed as a perlino pinto in her pedigree. Double dilutes always have pink skin and blue eyes. Single dilutes like buckskins have black skin and dark eyes. The blue eyes on the medicine hat are from the pinto influence: eyes near white marking are often blue, and splash pinto (some of these ponies are tobiano/splash) often has blue eyes. They are different blues from the double dilutes.

And, fantasy is a clean white horse... so yeah, your "white" horse is gonna show some smudges.

Around here, it's "saltwater cowboys" and "ranch", even though we're as far east as you can get without falling into the ocean. Farms are not really a Chincoteague thing, they are for growing crops, the islands are better at producing livestock from chickens (a thriving thing before the '62 storm) to cattle to sheep (the last left Assateague in the 60s) to the famous ponies.

The Beebes (pronounced bee-bee) were the folks author Marguerite Henry talked to at great length, and included in her 1947 kids' book Misty of Chincoteague. The story was fictional, but the people, places and ponies were real. Billy Beebe is a descendant, lives on the Beebe Ranch, and will be glad to tell you a bit of the history behind the story.

You can buy a beautiful hardcopy of the books, stamped with Grandpa Beebe's branding iron.

Favorite bit: the illustration by Wesley Dennis of the family leading Misty up the steps to the kitchen, where she rode out the '62 Ash Wednesday storm (which devastated the islands and the pony herd). Right behind us is the house and the steps. THOSE steps. The rabbit in the illustration was there, though on the steps, not the railing.

Sadly, the barn and its history were lost in a fire in the summer of 2019. The ponies and other critters are fine. If anyone has pics of the old barn from tours past, contact Billy Beebe.  https://www.facebook.com/Beeberanch/

Captain Dan's Around the Island Tours

Lynda is a bit younger and skinnier than me, but neither of us matches the iconic view of slender blonde mermaid. Phoooo... who cares. Mermaiding is for everyone. Mermaids come in all sizes, shapes, colors and genders.

We camped at Pocomoke State Park in MD, on the Pocomoke River, and drove to Assateague Island (both north/MD and south/VA ends). To camp on Assateague, you have to sign up half a year in advance!

I took ALL the tails, but used the Linden monofin and the  Fin Fun Atlantis skin on the shore. For the camp pic I'm in the Fin Fun Tidal Teal (and the matching rashguard) and Lynda is in the Atlantis.

The surf on the north beach in MD was mild. The whole coast is shifting sand with no obstructions, in surfing, a "beach break" which can stay the same for years, or change within days. One part of the VA end (Beach Road, traffic circle, turn left) also had a long gently sloping bottom which contributed to low rolling waves. It probably was safe enough to swim out through the surf, but best if you have some canny swimmers with you as mertenders in conditions like this. We stayed in the swash zone. The thing to know is you will get rolled around, and you will collect sand in the corners of the tailskin. In the ocean, know what the currents are doing: currents moving out to sea? Longshore currents? How are those waves breaking; remember, they change during the day as the tide goes in and out, and hits different parts of the beach. I am a more powerful faster swimmer IN the tail, or the monofin, but you need to know what you can and cannot do in any situation, whether you need to ditch the tail or just keep swimming...

​Anybody can have fun posing in the swash or on the beach.