play with your toys

You don't have to let your vintage toys, collectibles and action figures sit on a shelf. You can turn them into art: repainting and resculpting model horses, recostuming action figures... take them for a walk and photograph them in natural surroundings or build your own environments. Tell a story, make cartoons, do a fun diorama, or create an internet meme.
click on the pics for a unique look at one of my favorite islands 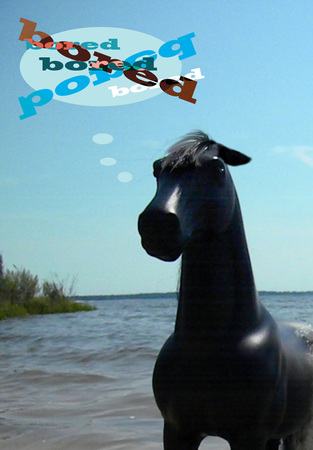 It's a fun way to record your vacation (from the point of view of your favorite miniature superhero), or a hike, or a favorite landscape. Or mail a figure to someone and have them take a pic of your character in a place you can't get to yourself!

You can also use a tripod (or a very steady hand) and shoot two pics from the same angle: one with the foreground/figure in focus, and one with the background in focus. Combine the two in Photoshop.

You can also shoot your action figures on green screen (like they do for special effects on big films), and edit into any background later. But taking them for a walk is usually more fun, and the figures will interact with the landscape and the lighting in ways that they won't on greenscreen.

I took my Legolas action figure and an old Hartland Arabian horse model from the early 60s to Nixon County Park; by peering through the ears of a plastic horse, from the perspective of a 6" tall action figure, one sees a familiar landscape in a new way. Or maybe I'm just imagining how Legolas (the tree-hugging Elf from Lord of the Rings) would see this landscape if he rode through it.

Along for the ride: some Schleich and Safari faeries and horses (and one great horned owl). Try varying your camera angles: do very high "aerial shots" or crouch down and see the world from a few inches high. The real trick is getting the right parts of the shot in focus. Often focusing on a figure at arms' length will get the rest of the landscape out of focus. Take two shots: one focusedon the foreground figure, and another on the background, combine in Photoshop. A shot from the character's eye level will make them seem larger and more real.

I was volunteering with wildlife rehabilitators (working with raptors, that is, hawks and owls) when the first Jurassic Park films came out.

I have wrangled raptors, and the little ones are a Force of Nature... the dino ones are my favorites since I saw an illustration of Deinonychus in an old National Geographic. Now what would happen if that evolved for another few million years? I pictured anthropomorphic dino-people, as have many artist over the years. Actually, they did evolve... into grey parrots. Which are pretty smart too. Here one explores Chincoteague Island...

Got this neat raptor plushy a couple decades ago... when the first Jurassic Park film came out. It's a Dakin, not a licensed JP toy, and a nice non-feathered raptor.

Robert Bakker is a paleontologist who wrote a cool little book called Raptor Red, about a year in the life of Utahraptor (what those oversized "velociraptors" really were). He did a lecture at Millersville one year, and friends and I attended. I got to ask him a question about that big claw, and how it relates to modern raptors (hawks, owls). After the lecture, you could go up on stage and talk to him while he drew dinosaurs in marker on great huge drafting paper (I got a protoceratops). Yeah, so here's this medium aged woman going "would you sign my raptor?"

He did. There it is, many years later.

We also got a closeup look at the tyrannosarus claw that flew past his head when the tyranosaur/raptor attack was filmed in Jurassic Park (he was on set, as one of the advisors). Of course the dinos were added later in CG, but the skeleton that gets wrecked was real, and real wreckage occurred on the set.

If you're confused by the raccoon, that's Rocket, he was one of the stars of Guardians of the Galaxy alongside "Starlord"... played by Chris Pratt, who also plays the raptor wrangler in Jurassic World. Rocket was, of course, CG. Chris Pratt defined cool by riding a motorcycle through the woods at night with a pack of raptors in Jurassic World. It became an internet meme in 2015. 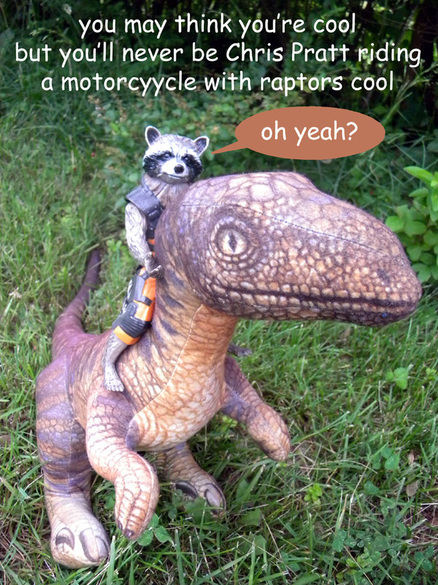 A moment of appreciation for this pretty good action figure (circa 1973) from Gabriel Toys. He’s the Lone Ranger’s Silver (I found him, yellowed with age, in a thrift shop with no tack, and repainted him, pics of his original condition at bottom of gallery). His head’s a bit clunky, he’s terribly sickle hocked (when the rear cannon bones… lower leg… are straight, the hocks are set too far beyond the edge of his butt, or, when the hocks are under his butt, the lower leg slopes in the shape of a sickle, a weakness in real horses), and he is a bit ewe-necked (the neck bulges underneath, not arched like a swan). He actually looks a bit like the kind of western horse Remington and Charlie Russell drew and painted, the sort cowboys would have been riding back in the 1800s, definitely not something Barbie would choose. He is nicely articulated (to the point he’d make good art reference if you had some other stuff like photos of real horses), though his butt is a bit bulgy when the rear leg is forward, and his chest is a bit oddly deep right where the front legs attach (a bit too far forward). Even his tail moves.

He was originally painted white body with grey mane and tail and dark hooves: a grey horse, not a white one. Greys begin a normal horse color and whiten as they age, usually turning white between 6 and 10 years old. I repainted him the white Silver has always been; pink skinned (shows around the eyes, muzzle and hooves) and dark eyed. There is no albino gene in horses. Silver from the 2013 film is a Thoroughbred with sabino genetics... a kind of pinto... you can see the speckled skin around his face, and some in his neck and shoulder. The pics here of him looking like a weird palomino pinto are the pics taken before I repainted him to his original glory. Where the light hit, he is faded nearly orange, where light was blocked by his original tack, he is still mostly white. One side yellowed more than the other (presumably he was set on a shelf with that side out). Hopefully the acrylic paint will preserve the plastic underneath.

In Lord of the Rings, he ran on top of the snow in light shoes while everyone else floundered through the blizzard. Here, he borrows that bunny sled from the Hobbit films and takes to the trails. Twelve inch action figure, small plushie rabbits, some hemp twine, and a thrift store sled basket with some modifications. I wrote an article on theonering.net on real mushing vs Radagast's Racing Rhosghobel Rabbits here: http://www.theonering.net/torwp/2013/01/03/67872-radagasts-racing-rhosgobel-rabbits-a-recreational-musher-looks-at-the-realities-of-bunny-sledding/

...began as a fannish meme: pics of Sherlock stars Benedict Cumberbatch (Sherlock) and Martin Freeman (John Watson) matched with otters and hedgehogs with the same expressions. I realized I already had Otterlock and Hedgejawn living in my house... now to take them on some adventures (click on the pics for more). 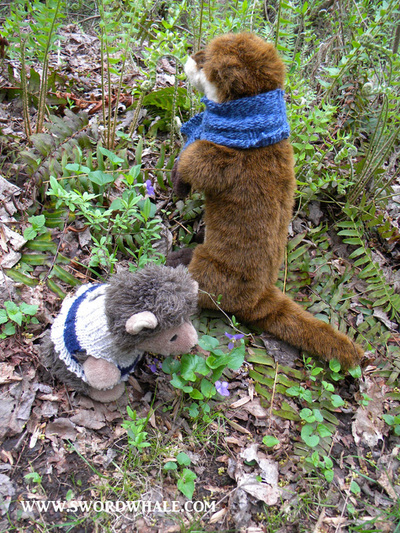 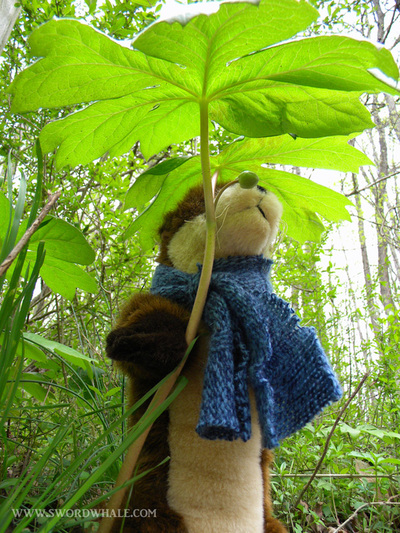 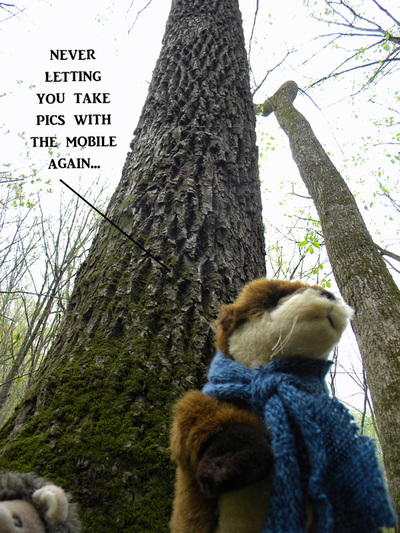 Like Silver, "Buckskin" was found at a thrift shop, by a friend who gifted him to me. He's a Johnny West horse, a few were articulated, this one just in the neck which gives him some great expressions when posed. Despite his name, he's a palomino (as were a number of the Johnny West horses like Flame and Thunderbolt, though they sometimes came in bay or a weird sorrel with a mealy-mouth muzzle, flaxen legs (some sorrels with the flaxen gene do have pale legs), flaxen mane and tail and a weird flaxen patch on the chest. All the Johnny West horses are well designed by artists who clearly knew horses. The type of horse depicted is more like a cross between a Remington or Russel horse (wiry little hammer-headed mustangs) and a Thoroughbred... than like a modern Quarter Horse. Many people repaint or remodel these and take great shots of miniature western scenes using these horses and any 12" doll or action figure (Barbie, GI Joe, Johnny West, and others). This one has wheels on the bottom of his hooves.

Oh, what to do with that over-loved, ratty haired fashion dollie your ten year old has abandoned. Consign her to the yard sale? Ye Olde (horrors!) Thrifte Shoppe?

Break out the hot glue (or epoxy, or Gorilla), a bag of scrap cloth, chicken feathers, beads, foil, stuff from the craft shop, from the recycle bin. Be creative and create a Lawn Goddess, a Garden Faerie, an Angel for the top of the Christmas Tree.

No (gaaaack!) sewing required. Fence wire (one of the great mending tools alongside duct tape and gum)(get it at your farm or garden store) makes good wing armatures. Drill a couple of holes in Barbie's back (the size of the wire) and glue it in: works best if there are two holes per wing (no twisting and rotating). Bend the wire into nifty shapes, stretch old nylons over it, or use other gauzy stuff (or window screening). Spray paint and stencils can add designs to wings, or make cool tatoos. Hang with fishing line.

If her hair's a mess (it probably is), try conditioner, Cowboy Magic (or other mane detangler, found at tack shops and farm stores), or chop it off and replace it.

Put her in hot water: it softens the plastic enough to bend limbs farther (stick her in cold water when you have them bent just right).

Turn a potted plant into a miniature world. Put those faeries figurines in a habitat, not on a shelf. Click the pic below for ideas. 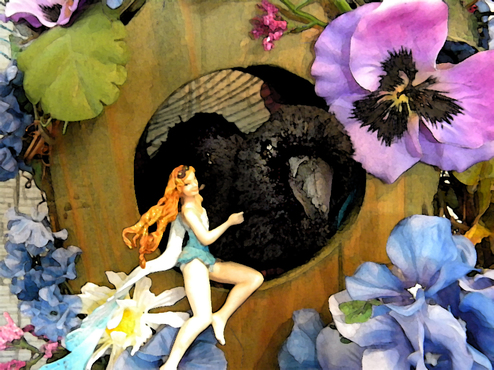